GOP’s crude birth control fake: Here's who they may fool (hint: it's not women)

Plans to sell "the pill" over the counter reveal they don’t know how it works, and they think women are stupid 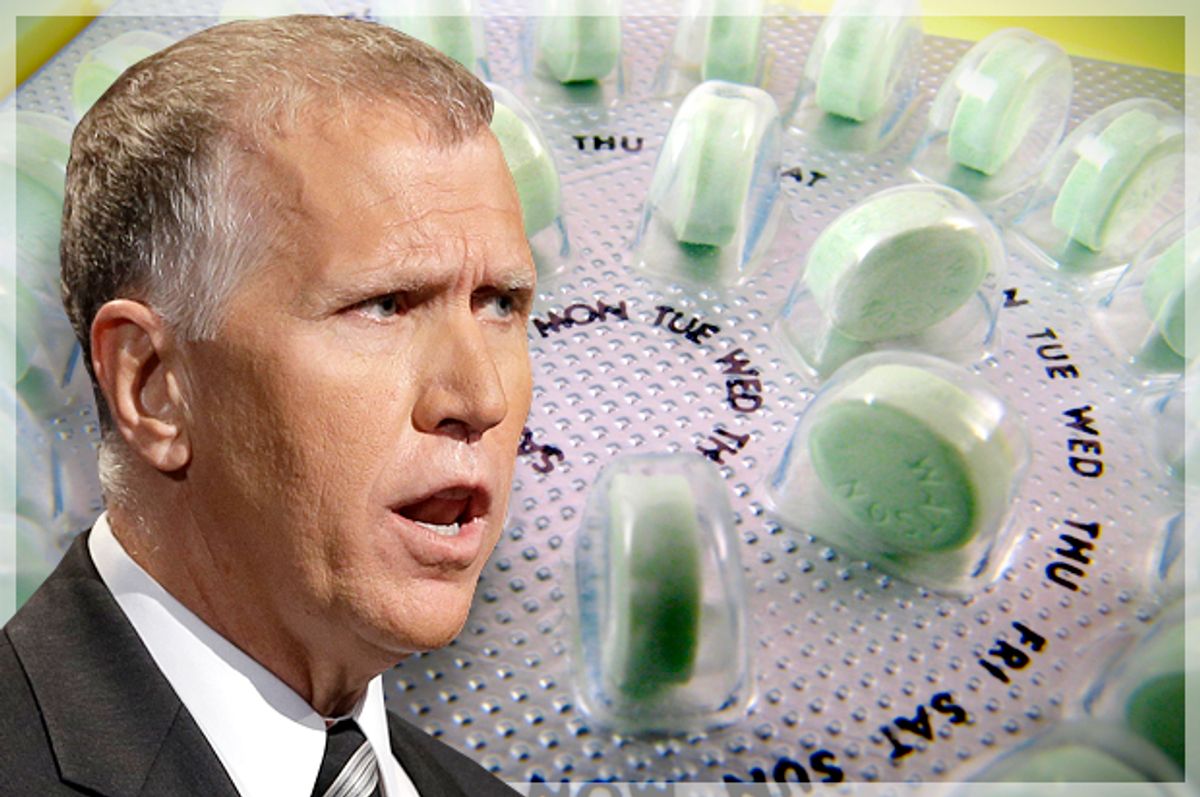 You can’t say Republicans haven’t learned from their 2012 disasters: They’ve drilled their candidates not to talk about rape, legitimate or otherwise. Now a few are realizing it hurts to be seen as the party that’s against contraception, too.

But they don’t support the Affordable Care Act, which mandated contraception without a copay. And they can’t come out against the Supreme Court’s Hobby Lobby decision, either, which vastly expanded the religious exemption letting employers duck the ACA mandate, since that’s beloved by social conservatives as well as free-marketeers. So in the closing weeks of the 2014 midterms, we’ve seen several Republican Senate candidates running tough races in purple states endorse a novel proposal: allowing pharmacies to sell birth control pills over the counter.

Colorado’s Cory Gardner, who had to flip-flop on his support for personhood legislation that could outlaw some forms of birth control, released an ad last week saying, “I believe the pill ought to be available over the counter, round the clock, without a prescription.”  Days later North Carolina’s Thom Tillis, during a debate with Sen. Kay Hagan, did the same, seeming to catch Hagan a little bit off guard. Virginia’s Ed Gillespie, Minnesota’s Mike McFadden and Louisiana’s Rob Maness have all backed a version of the same idea.

First of all, a note to Gardner’s ad people: There’s really no such thing as “the pill,” there are dozens of forms of oral contraception. (I counted more than two dozen in this WebMD overview.) And it doesn’t much help that they’re available “round the clock”; you have to take them daily, and they take a while to become effective.

From Gardner to Rush Limbaugh, conservative men talk about “the pill” as though it’s comparable to condoms or Cialis: something you take only when needed, so you can stop and pick up a pack at Walgreens “round the clock” and just pop one “when the time is right.” And if you need to pop them a lot, like Limbaugh thought Sandra Fluke did, you’re a slut.

This is why it would be best if Republicans stopped talking about the pill altogether.

Gardner also boasts that the over-the-counter birth control pill helps women by letting them skip a visit to a doctor. This is a little dim, too. When deciding which “pill” is best, women and their doctors consider her risk of breast cancer, heart disease, stroke; her weight, her plans for pregnancy, whether she is breast-feeding, and her overall health.  For many women, it can take several tries to find a pill that doesn’t cause side effects like weight gain, depression and loss of libido. Some women don’t even use “the pill” for contraception, but to treat other reproductive health issues.

Long-available forms of “the pill” are relatively inexpensive, under $10 a month; other more recent formulations can cost more than $50 a month. But Gardner, Tillis and the other GOP supporters of over-the-counter birth control have never addressed the issue of which types of pills should be available over the counter, likely because they don’t know so many types exist.

Even if every existing form of oral contraception was suddenly available without prescription – and it’s not clear that’s feasible -- many women would still be unable to afford the version of “the pill” that’s right for them. “If birth control goes over the counter without [insurance] covering it, that actually hurts access,” Dr. Nancy Stanwood, board chair of Physicians for Reproductive Health, told ThinkProgress.

Of course, many women can’t take the pill, or don’t want to, and rely on IUDs, injections or implants for their birth control needs -- and having an IUD inserted by a doctor can cost up to $1,000. (No word yet on whether Cory Gardner thinks Walgreens should sell DIY IUD packs, or self-injectable contraception, over the counter, too.)

In the final irony, Gardner and Tillis have opposed efforts to make emergency contraceptive Plan B, the only form of oral contraception currently available over the counter, more widely accessible.

It’s true, as Gardner argues, that a committee of the American College of Obstetricians and Gynecologists thinks oral contraception should be available over the counter. It’s nice that he cares what ACOG thinks. The group also sided against Hobby Lobby in its challenge to the contraception mandate, and opposed the Supreme Court’s decision, which it said “inappropriately allows employers to interfere in women’s health care decisions. All health care decisions – including decisions about contraception – should be made by a woman and her doctor, based on the patient’s needs and her current health.”

Women aren’t likely to be fooled by Gardner, Tillis and other GOP candidates, but the media might be.