Turn down for butt: How the derrière took over pop culture

From Iggy Azalea to Nicki Minaj, rear ends have never been more in vogue. So Salon asked an expert: Why? 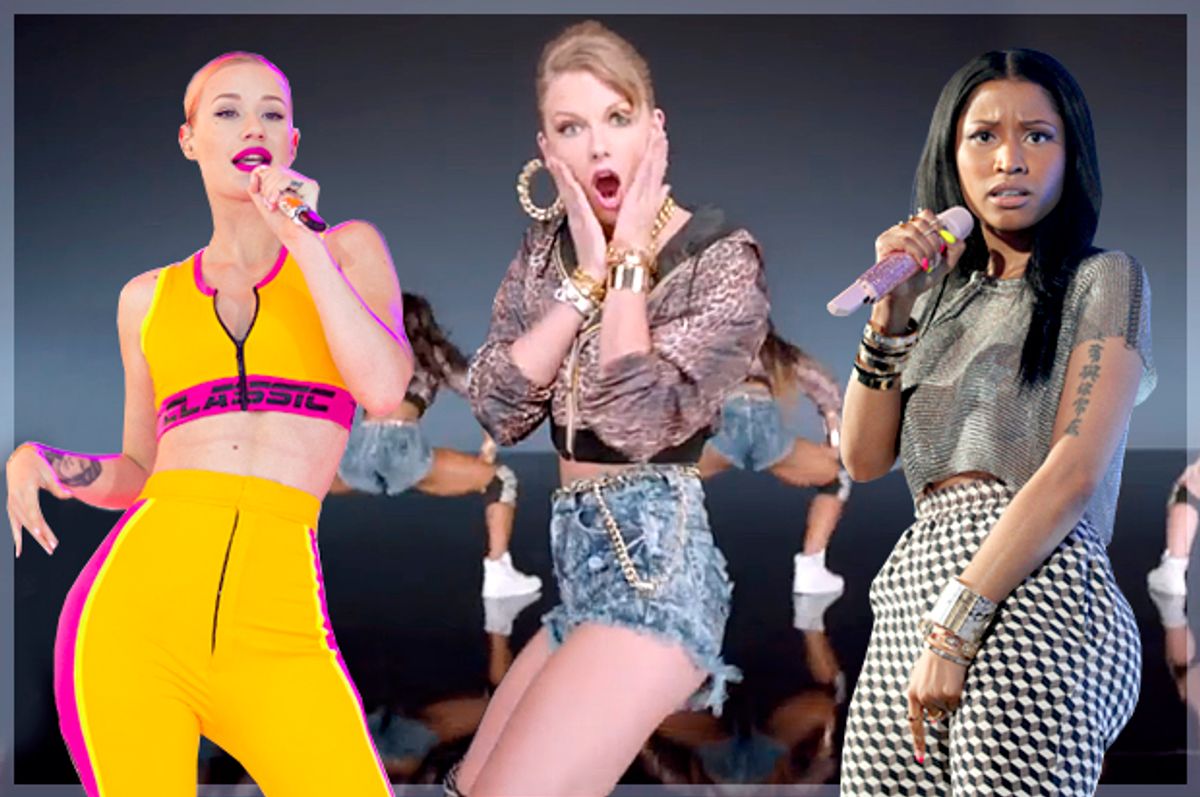 Butts, butts, butts. They’re everywhere! Last week, J.Lo and Iggy Izalea released an appropriately gluteal teaser for their upcoming music video for “Booty.” Just a week before, Sofia Vergara stood on a spinning pedestal at the Emmy’s, playfully patting her shapely rear. The day before, Beyoncé performed at the MTV Video Music Awards alongside a bunch of gilded, bethonged backsides doing the splits.

Marvel introduced a cover for “Spider-Woman” featuring the heroine in a beyond-skin-tight suit and her round booty in the air. The same day, Nicki Minaj premiered the video for “Anaconda,” which featured a bunch of women shaking their butts in the jungle and causing earthquakes. There’s Meghan Trainor’s hit “All About That Bass,” which was catapulted up the Billboard Hot 100 last month and boasts of having “all the right junk in all the right places.” The song includes the lines, “Yeah, my mama she told me don't worry about your size/She says, ‘Boys like a little more booty to hold at night.’” And, of course, Taylor Swift controversially crawled under a bunch of black women shaking their butts in her video for “Shake It Off.”

Miley Cyrus, who prompted ridiculous national twerking hysteria following her performance at last year’s MTV Video Music Awards, has been especially butt-obsessed as of late. In early August, Cyrus posted an image of Nicki Minaj’s booty-centric “Anaconda” cover Photoshopped with white skin and her own face (seriously, you cannot make this stuff up). More recently, the 21-year-old shared an image of herself posing with what E! News called “a giant prosthetic butt.”

That’s just since August, you guys.

Before that there was the summer hit “Bang Bang” by Jessie J, Ariana Grande and Nicki Minaj, which contains the lyrics, “She got a body like an hourglass/But I can give it to you all the time/She got a booty like a Cadillac/But I can send you into overdrive.” In May, Jason Derulo premiered the video for “Wiggle” (lyrics: “You know what to do with that big fat butt/Wiggle, wiggle, wiggle”).

I think I’ve made my case: Shapely bums are having a big moment. Of course, they’ve had many moments. This isn’t J.Lo’s first time sashaying her famous booty around the block. “Anaconda” is a remake of the legendary ode to junk in the trunk, Sir Mix-A-Lot’s “Baby Got Back.” There have been countless musical entrants to butt-worship -- from Juvenile’s “Back That Azz Up” to Destiny’s Child’s “Bootylicious” to Queen’s “Fat Bottomed Girls.” But what to make of the most recent hiney hysteria?

For help answering that question, I went to filmmaker Kurt Holland, director of the documentary, “Bottoms Up,” which profiles America’s off-and-on obsession with the derriere. We talked about butt implants, the green Versace dress that brought infamy to J.Lo's behind, and the exoticization of black women’s bodies.

Why are we having this butt-obsessed moment right now?

I think there's always some body part that Americans are obsessed with. It's gone from breasts to legs. In the '80s, there was the whole thing with Sir Mix-A-Lot and now somehow we've circled back. We're back on butts with Sir Mix-A-Lot being a sample on the Nicki Minaj song. So I guess it's a cycle, or a whole 360 of body parts to get into. We went from the waif model to a J.Lo who blew up with her backside. Then you get to Kim Kardashian. Now here we are, we have Nicki, we've got J.Lo back again, Iggy Izalea. Now it's just one of those things that everybody wants.

You mentioned Sir Mix-A-Lot, so obviously there have been butt-loving fads in the past, but where did this all start?

I give a lot of credit to 2 Live Crew and Luke Skyywalker, because his videos back in the day, he was blowing up the whole Miami scene. There were so many curvaceous bodies down in Miami and a lot of bass music would go with that. He was one of the people who put it in the forefront.

That was in the African-American community, but in the mainstream, J.Lo. That just kind of stunned everybody when she came to the Grammys in the green Versace dress. The Grammys back then were more high fashion; you would think more of model-type bodies and she stunned everybody with her body. I would definitely give her props on being one of the foremothers of showing off the butt.

It seems this round of booty-worship is pretty white. What do you make of that?

It's kind of funny because back in the day, a lot of slaves were ridiculed for their body types. Their bodies were more curvaceous and it was looked at as a freak show. It would be anything from Coney Island acts to traveling circuses. They'd be like, "Look at her butt, this is the eighth wonder of the world!" But usually things in different cultures get adopted -- people say jazz started with African-Americans, then white people caught onto that.

Miley Cyrus recently Instagrammed a photo of the cover of Nicki Minaj’s “Anaconda.” She Photoshopped the image to add her own face and turn Minaj’s skin white. Any thoughts on that?

I've seen Kermit the Frog in the "Anaconda" pose, so it's not just white folks now. Miley Cyrus, I would almost call her a culture vulture -- you know, coming from a country background and latching on to the whole hip-hop scene and all the twerking. Twerking's been around since the '80s -- even before then in African tribes. So Miley Cyrus' gotta do things to keep you watching. It's shock jock behavior.

In general, is this a good thing, this booty worship? Does it mean acceptance of a broader range of body types or is it just further restricting our notion of what is sexy?

I think it's definitely in African-American females' favor that this body type is more praised. Going from being ridiculed to being an object of desire is great, but maybe that's too sexual -- people used to think that African American women were more sexual than white women. It definitely opens up doors for people to be more open to different body types. I think that's pretty cool. Now, I don't know what the next body crazy is -- we did have waif models in the grunge period, so I hope curvaceous people are not left out when a new body part is talked about.

Your documentary delves into the world of surgical butt augmentation. Just how popular are those types of procedures?

They're very popular. Definitely very popular in the entertainment world, in music. There's a lot of artists out there ... people question Nicki Minaj's butt, Iggy's. A lot of people don't own up to it. I know you can do them cheaply in the Dominican Republic. It doesn't look proportionate to some people's bodies. You'll see video models and they'll have these big butts but their legs don't match the size of the butt. Work out and achieve it, do it the safe way.

Is this butt worship here to stay or will there be a new body part that will take the crown?

I think there definitely will be another body part that will take center stage sometime soon. People are just catching on to this craze, so it has a good 10 to 15 years in it. It's definitely going to be around for a while.

I mean, there was a boob craze for the longest. It just keeps moving all over the place. I don't know where it'll move next. Where do you think it'll move next?

I don't know! What body part is left?

Hopefully my future kids aren't injecting themselves with silicone in some weird area.