Wendy Davis' choice: Why speaking out about abortion must remain a woman's decision

Not all women can speak out about their abortions. But when they do, it's not our place to question their motives 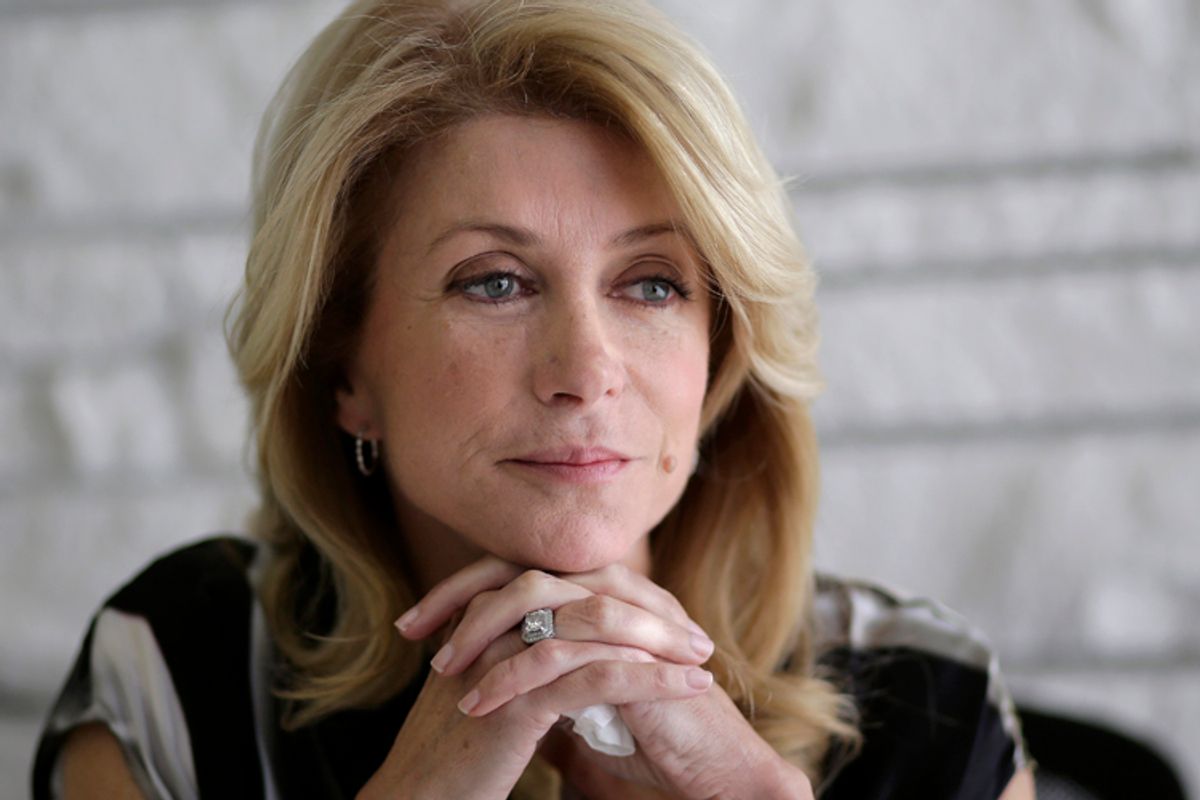 In her new memoir, “Forgetting to Be Afraid,” Texas state senator and gubernatorial candidate Wendy Davis reveals private information about her reproductive history, including two abortions she had. This is exactly what she should have done. Not because it might impact the polls heading into November’s election or because people like me will write rallying think pieces in support of her decision -- but because Davis decided that sharing her abortion stories was the right decision for her.

So it goes with most decisions related to abortion. Women must make the choices that are best for them and for their families. The same logic applies not just to the procedure, but to talking about it as well. But that crux of pro-choice activism seems to contradict another of the movement’s apparent bottom lines when it comes to speaking out. Pro-choice activists advocate for bringing reproductive decision-making out of the shadows, and for sharing abortion stories shamelessly and openly. It’s a simple act that has the potential to eliminate the stigma attached to abortion, and to allow women to exercise their reproductive freedom in a way that is truly free.

I believe in the power of sharing abortion stories, which is exactly why I shared mine. It also might be exactly why Sen. Davis shared hers. But, as Jessica Valenti points out at the Guardian, discussing a deeply personal part of one’s life and medical history isn’t actually a “simple act,” nor is it something all women should feel compelled to do. Not everyone has the desire or support systems in place to speak out. And the women who do keep their stories to themselves are not weak or wrong or guilty of perpetuating stigma. They are simply exercising yet another right — to maintain their privacy — which all too often comes as a rational response to serious safety threats.

I was called "brave" quite a lot after I wrote about my abortion, and Sen. Davis is being lauded as the same. But bravery in this context is often born of the support systems and soapboxes that allow some women the strength to speak out. Would I have written about my abortion without the platform I had, which allowed my story to make a difference for other women who needed to read it? To be honest, I can’t say I would have. But given my beliefs — in the power of a single story, in making use of the resources available — speaking out seemed like my only option, or at least the only option for me. I believed my story could have an impact, not because it was mine but because it was so many other women’s, too — and because I happen to work for a media outlet that allowed me to post it somewhere those women might see it. I had the support of my family, but also of my employer. I was in a position to tell a story that needed to be told, and so I did.

It wouldn’t be surprising if Davis felt the same way. She, along with other public figures including Lucy Flores and Jackie Speier, who have spoken out about their abortions, might have felt required to tell her story because she had the opportunity, and because it’s a story that still needs to be told. I agree with Valenti: That shouldn’t be the case, and women shouldn’t have to explain themselves to anyone. But at the same time, sharing these stories is important. And when we do, there should be no speculation about why we did or whether we should or shouldn’t have spoken out. Some on the right have suggested that Davis’ decision to speak out was made in an effort to gain political favor; the left is running in circles about whether women should feel compelled to share their stories. There should be no room for condemning women’s choices based on outside assumptions, and there should be no room for telling women what they should or should not do. There should only be room for women to make the choices that are right for them, so they can go on and continue to live their lives.