Washington Post's Marc Thiessen feels George W. Bush is owed an "I told you so" on Iraq. Nope, not even close 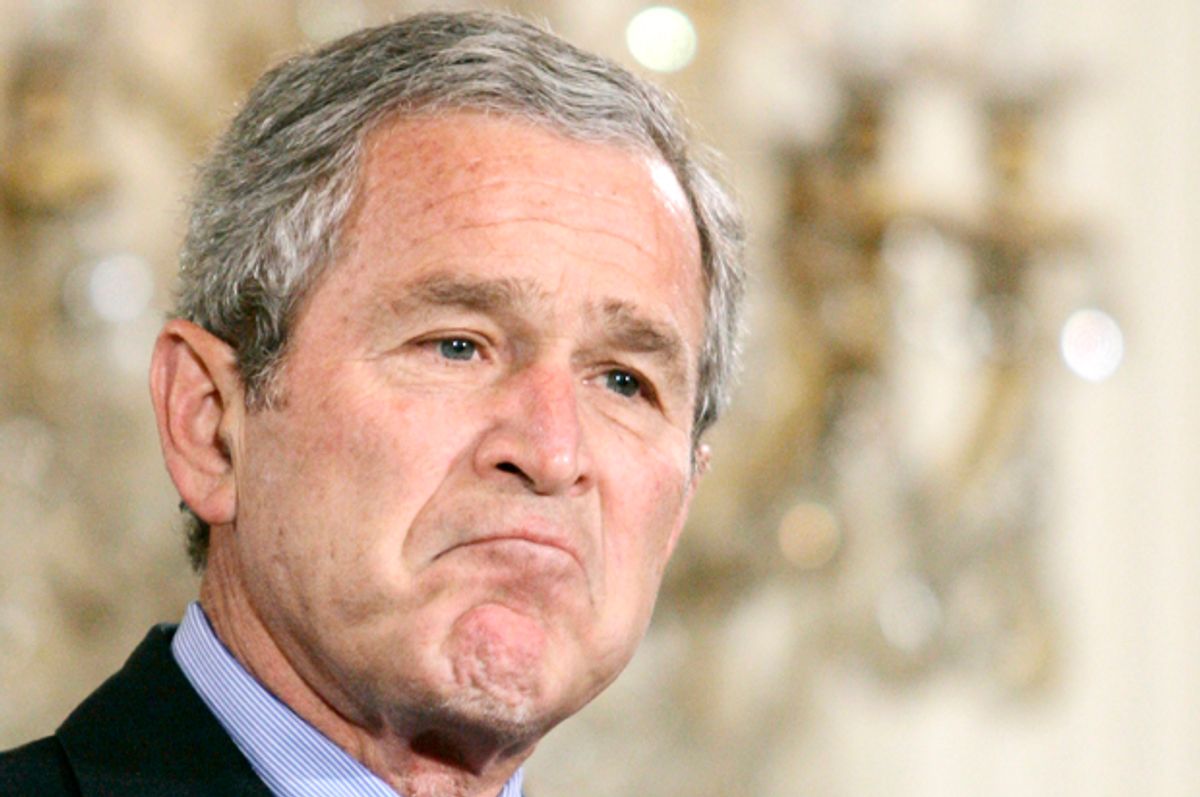 It seems that Washington Post columnist, former Bush speechwriter, and torture enthusiast Marc Thiessen is on a campaign to use the chaos in Iraq to score some cheap political points for his former boss. He’s written a piece arguing that George W. Bush was “prophetic” when he warned that withdrawing U.S. troops from Iraq would lead to renewed violence in the country, and that the former president has earned himself an “I told you so.”

I can’t actually fathom the quantity of chutzpah necessary to make this argument with the expectation that it be taken seriously. But there it is in the pages of the Washington Post. So let’s dive in and plumb the depths of Marc Thiessen’s moral sub-basement, shall we?

He notes that in July 2007, Bush said the following:

This statement, Thiessen argues, was “prophetic” because:

In 2010, Obama did precisely what Bush warned against and withdrew all U.S. forces from Iraq — overruling his commander on the ground, Gen. Lloyd J. Austin III, who had recommended that Obama keep 24,000 troops. And since then, everything that Bush warned would happen has come to pass.

Thiessen’s entire argument hinges on this absurdly reductionist take on how the total withdrawal of U.S. troops from Iraq came about. When you start filling in a few details, everything falls apart.

First of all, Bush made that statement in 2007 when the security situation in Iraq was still very precarious. But conditions improved to the point that Bush felt he could start making arrangements with the Iraqis to begin the drawdown of U.S. troops. In December 2008, the U.S. and Iraqi governments signed the Strategic Framework Agreement and the Status of Forces Agreement that, as noted by the Bush White House’s fact sheet on the matter, “sets a date of December 31, 2011, for all U.S. forces to withdraw from Iraq.”

In a June 2 videoconference with Mr. Maliki, the president emphasized that any agreement would need to be ratified by the Iraqi Parliament. But not everybody in the American camp agreed with this stipulation.

Brett H. McGurk, a former Bush administration aide whom the Obama administration had asked to return to Baghdad to help with the talks, thought that a bruising parliamentary battle could be avoided by working out an understanding under an existing umbrella agreement on economic and security cooperation — an approach Mr. Maliki himself suggested several times. But the White House wanted airtight immunities for any troops staying in Iraq, which American government lawyers, the Iraqi chief justice and James F. Jeffrey, the American ambassador in Baghdad, insisted would require a new agreement that was endorsed by the Iraqi Parliament.

The negotiations were complicated by the Americans’ failure to broker a power-sharing arrangement. With Iraqi leaders jockeying for influence and Mr. Allawi still out of the government, neither Mr. Maliki nor his rival wanted to stick his neck out by supporting a continuing American military presence, no matter how small.

Bush set the timeline for withdrawal of all troops, and the Iraqis would not agree to maintaining a U.S. military presence in the country. Thiessen just blew all of this off, even though it kicks the legs out from underneath his “Bush was right” argument.

This argument is a comforting fiction for people who supported the war from the sidelines or were involved in its prosecution, who maintain that the war is justified but every bad outcome of it is somehow Obama’s fault. The inescapable truth of the matter is that we’re having this discussion only because Bush and his lieutenants screwed up horrendously, and we’re still dealing with the lingering effects of their terrible policy decisions.

The reason the Islamic State poses such a dire threat to the region now is because war in Iraq created the conditions in which it has thrived. The authoritarian policies of the Iraqi government under Nouri al-Maliki are primarily responsible for Iraq’s current collapse, writes Slate’s Joshua Keating, but “if American decisions were to blame, the top candidates are the original invasion of Iraq, the de-Baathification policy that gutted the country’s political institutions and antagonized the Sunni population, or the original promotion of Maliki as leader in 2006.”

In the end, Thiessen’s argument is that Bush is “prophetic” because he stood on high and looked down on the fractured, violent mess he’d created for no good reason, and said: “Well, this could go wrong.” Nope, sorry. You don’t get an “I told you so” for starting a fire and then warning that things might get burned.