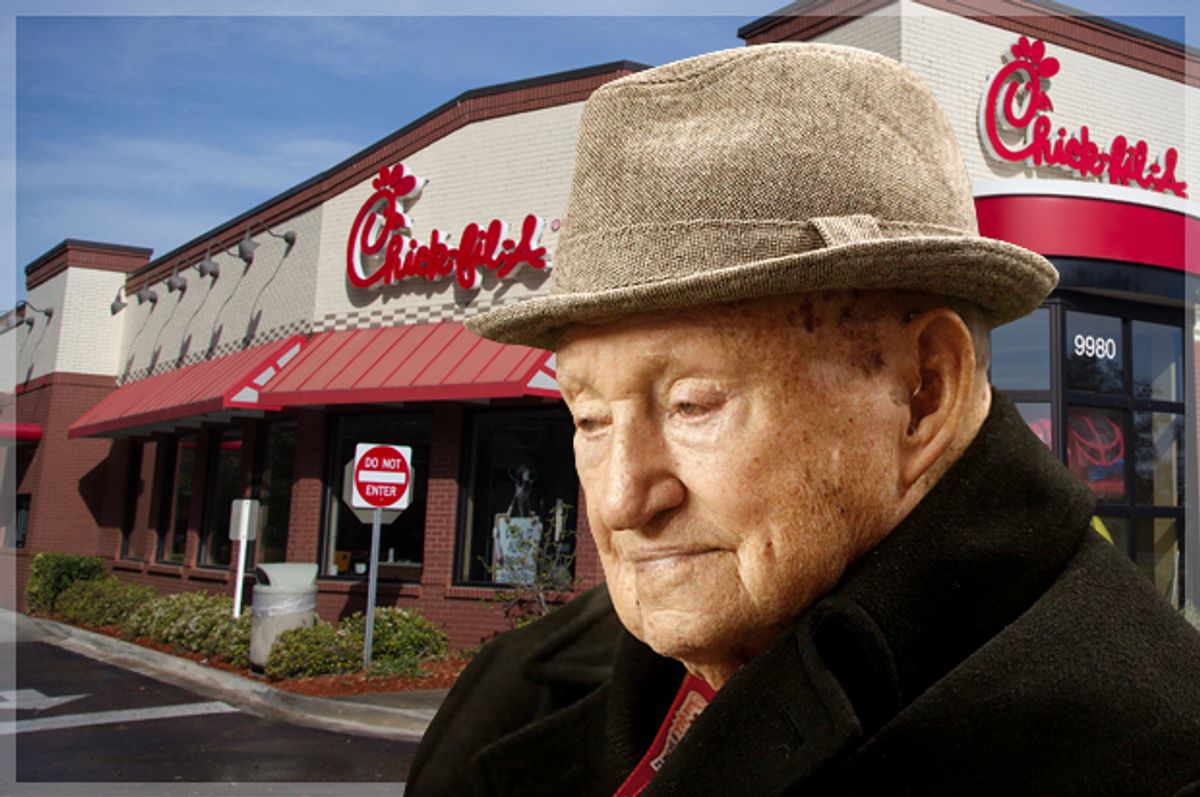 The death of Chik-fil-A founder Truett Cathy this week provided an occasion to rehash the ugly 2012 controversy that enveloped the fast-food chain after anti-gay marriage comments by COO Dan Cathy (Truett Cathy's son) in an interview.

Before the comments, Chik-fil-A had spent years funding anti-gay charities. But it took one interview with a tiny newspaper to catapult Chick-fil-A onto the national stage. And yet the man who interviewed Dan Cathy insists Cathy said nothing homophobic, and, indeed, never mentioned gay people at all.

The piece, which ran in the North Carolina-based Biblical Recorder, would seem to contain an implicit rejection of gay marriage, with Cathy saying, "We are very much supportive of the family -- the biblical definition of the family unit." And yet the interviewer, K. Allan Blume, told Salon that it wasn't about gay people at all, and that the reaction to the piece has left him surprised to this day.

Given Cathy's donations as well as his company's openness about its religious underpinnings (it is, famously, closed on Sundays), his son's belief in what he called "the biblical definition of the family unit" is hardly a shock. But it's significant that this small, local, theologically minded newspaper managed to unintentionally break a national story about a major corporate controversy.  Salon spoke to K. Allan Blume about that fateful interview and the perils of being a Christian reporter in a highly charged, partisan media landscape.

Tell me a bit about the Biblical Recorder: What do you conceive of as its role, and who is the intended audience?

It's been around 180 years -- it was one of the early papers. Our focus is primarily Baptist life, and though that can be worldwide, we focus narrowly on what's going in North Carolina, though we do cover things well beyond that. Our primary focus is to make sure North Carolinians know what's going on, primarily with Baptist life. But we go beyond that in covering evangelical work all over the country.

With that in mind, was it surprising to you that your piece gained such a large, and broad, readership?

It was a total shock, totally out of the blue, that this thing gained the kind of traction it did. And interestingly enough, it only gained traction because there was an interest in distorting what it said. I had gotten word that Dan Cathy was going to be in the area, and his publicist sent me an email asking if I wanted an interview. That struck my interest, knowing that Dan Cathy is a Southern Baptist and so are we, and even though he's from another state, I wanted to find out more about his business philosophy and how his faith affects the operation of his company. I took about 35 minutes of his time and recorded the entire interview with his permission, and I still have that recording. I asked about his business philosophy, and that was the main focus.

The classic summary of what that story was about was in a call from a young, well-respected journalist in Washington, D.C., a woman who called and said, "I am very interested in asking you some questions. My first question is, what did Dan Cathy really say when you asked about homosexual marriage?" I said, "That's easy, I never asked him." She asked, then, "Why did he bring it up?" I said, "We never discussed that issue." She was in shock, and asked what the hoopla was about. He never put anyone down, he said what the values of his business are, particularly the "Second Mile" attitude of providing service that's better than expected. The story became way beyond what its context was. It became a fairly disappointing thing that the media created a story out of something that was not there. They did take Dan Cathy's statements in other contexts and put them in the story. And that organization ended up having to do a lot of correction of error.

You must admit, though, that though he didn't mention gay marriage, for many, "traditional values" reads as code words.

A lot of people live on the edge, emotionally, of something we shouldn't live on the edge of. I have a lot of African-American friends who do not want to use the word "black." But I have some friends who say, "Call me black, because I'm not African." It's just perspective. One likes it one way, one another. No one means to harm them. It's just where they come from. In this case, in some people's minds, the words "family values" mean something to them; they just have a different mentality. But Dan Cathy just didn't go there! He didn't mention any other values but his own family's. We have so many people living on the edge, wanting to take offense at anything anyone says. And a good example are the negative tweets about Truett Cathy. Because he hasn't said anything! He hasn't been in this cultural battle! But people are tweeting, "Glad he's gone," and some horrific statement.

Would you have handled the story differently?

It was a surprise it went in the direction it went. I can't think of anything in the story I would have done differently. I might have tried to be more emphatic about his value system. But there are things in journalism you have to leave out. If I leave something out, I think it's OK, but find out later someone needed it for clarification -- that's the way it is in journalism. I can't think of anything else.

Your writing, now, has the capability to reach an audience far greater than the one you initially intended. Do you feel as though Christian news stories are more at risk than ever of being misconstrued?

We can't start trying to explain every detail of what we believe and why we believe it. People just have to understand: This is our context and we have to speak in our context. But word limits and practicality won't allow us to go beyond that.

Do you think it's gotten harder to be a reporter for a theologically minded publication?

Yes. Because the public mentality had more Christian influence in the past. Now people are thinking in entirely different ways and we have to accommodate for that and realize a lot of people out there don't have a theological foundation or biblical knowledge. We're living in a biblically illiterate age, where 50 years ago, we had a biblically literate nation. We have to adjust to that and, yeah, it is a challenge. And when you print a newspaper, it goes to a small area. The Web allows us to go around the world. We have to adjust to that.

What do you think about, now, when you do interviews? Has seeing your Cathy interview go viral changed how you approach new subjects?

It's kind of impossible for you to explain your and your intended readers' shared assumptions in every article.

I think a lot of people took it out of context because of that reason. We wrote in an environment our readers would understand. It was put in someone else's interpretation of their worldview. It is a different environment and I understand why people would not understand some assumptions we made.