Suicide, promiscuity and sexual abuse -- what's not to love! Former "SNL" stars are terrific in a downbeat fable 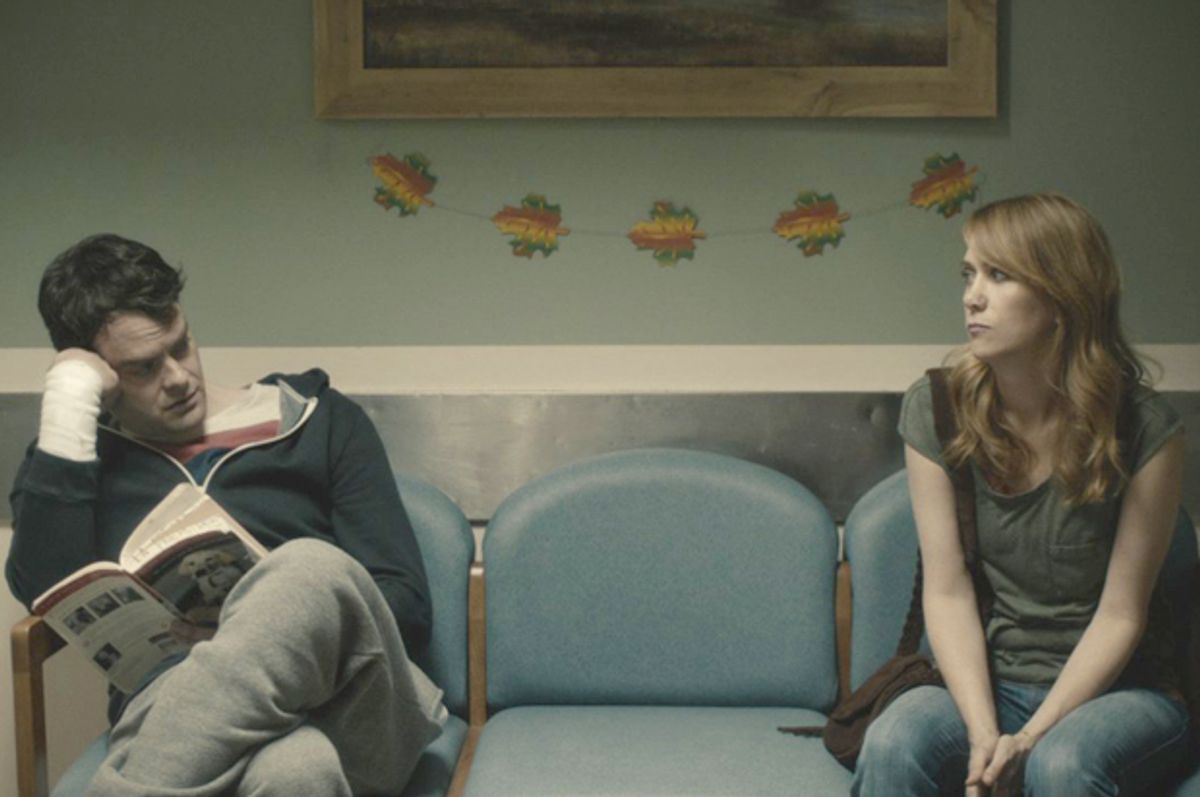 I watched three movies in a single day last week that featured a principal character attempting suicide as a major plot point. That’s definitely a personal best (or worst) in that abstruse category, as well as the kind of coincidence that makes you ponder what the heck is going on. Have things really gotten that bad? Two of those open this week, one being the compelling, earnest and peculiar melodrama “The Disappearance of Eleanor Rigby” (which I’ll review shortly) and the other being our subject today, “The Skeleton Twins,” which stars Kristen Wiig and Bill Hader as fraternal twins who both try to end it all, on opposite coasts, before the opening credits have concluded. (The third was the Scottish indie-pop musical “God Help the Girl,” which opened last week.) Of course there’s no possible connection between the making of those films and the recent death of Robin Williams, but it’s the sort of coincidental clustering that makes you consider the oddness of the universe.

There are at least two ways one could view this phenomenon. Maybe something in the zeitgeist is being accidentally captured here, some contemporary impulse toward despair or self-annihilation driven by the specific social, spiritual or economic miseries of the second decade of the 21st century. The four characters in these three movies are three women and a gay man, which strikes me as potentially meaningful but also as too small a sample size for the meaning to amount to anything. But it’s not like suicide is some new invention. It’s one of the most widely debated topics in philosophy, with Herodotus, Schopenhauer and the entire Confucian tradition defending the right (and in some cases the obligation) to take one’s own life, while figures as wildly disparate as Kant, Locke, St. Augustine and Albert Camus find various reasons to argue that it’s always immoral. As Sophocles learned some time ago, when a dramatic character chooses that path, she elevates the tension and gravity of the work around her.

But the failed suicide attempts in a movie like “Skeleton Twins” are essentially comic rather than tragic – I’m using those words in their dramaturgical sense, not suggesting that there’s anything funny about attempted suicide – and reflect an entirely different social phenomenon. By the time Emile Durkheim got around to writing a whole book about suicide in the late 19th century, it was understood as “a social ill reflecting widespread alienation, anomie, and other attitudinal byproducts of modernity” (to quote the Stanford Encyclopedia of Philosophy). So when Maggie, the depressed married woman played by Wiig in “The Skeleton Twins,” regards herself in the mirror of her suburban New York home and prepares to take a fistful of sleeping pills, she’s a long way from the pride and defiance of Antigone. Anyway the scene functions as a gag, even if we’re not supposed to laugh. The phone rings before she can get the pills down, and Maggie learns something we already know: Her twin brother, Milo (Hader), a failed actor in L.A., is in the hospital after slitting his wrists in the tub.

I think this is a secret key to understanding what director and co-writer Craig Johnson’s accomplishes in “Skeleton Twins,” with its highly successful pairing of two well-known comedians playing depressed and damaged characters. It’s not funny, or at least not most of the time, and its subject matter includes childhood sexual abuse, compulsive promiscuity and various grades of mental illness, along with suicide. But it’s still fundamentally a comedy; its greatest strength is the precisely tuned timing and sympathetic sensibilities of its two leads, playing estranged siblings who know each other far better than anyone else ever will. On the rare occasions when “Skeleton Twins” actually is funny, it reveals its true nature. Milo and Maggie’s priceless lip-sync dance routine to the 1987 Starship hit “Nothing’s Gonna Stop Us Now” – a song I had previously hoped to live out my life without hearing again – is worth the price of admission all by itself, and carries a redemptive dramatic kick as well.

From the outset, we know that Maggie’s attempt to show up and act all mature and responsible after Milo’s hospitalization is a big old fake. But it takes quite a while for the nature of Milo and Maggie’s intertwined dysfunction to become clear (and to figure out which of them is actually in worse shape). They haven’t seen each other for 10 years, for reasons we don’t understand at first. When Maggie convinces Milo – who lives alone in Hollywood and describes himself as a “tragic gay cliché” – to move back east to their hometown, he’s entering a zone of bourgeois suburban comfort that is both alien and familiar. (The movie was shot in Nyack, New York, a pleasant town in the lower Hudson Valley.) Maggie has a cheerful, reliable and rather dull contractor husband, Lance, adroitly played by the ever-watchable Luke Wilson. She has a house and a mortgage with middle-class vehicles and furniture to match; she and Lance, at least officially, are trying to have a baby.

The real story of Maggie’s marriage is a bit more complicated than that, as things turn out. One of the most rewarding aspects of “Skeleton Twins” is the unlikely alliance that sprouts between Lance and Milo, two guys who could hardly be more different. It would have been awfully easy to make Lance a homophobic jerk, but he doesn’t seem bothered by Milo’s sexuality at all. Instead he’s a decent, loving man with relatively modest aspirations, who has to come to grips with the fact that he barely knows the woman who claims to love him but has repeatedly lied to him. Not that Milo is the pinnacle of honesty. Coming back to Nyack means reconnecting with an older guy from his past, a tormented closet case named Rich (played with bottled-up passion by Ty Burrell) who is currently playing the part of straight suburban dad. There are excellent reasons why Milo and Rich aren’t supposed to see each other, and why Milo doesn’t want to tell Maggie that this old flame remains unquenched.

I imagine different viewers will have different reactions to Hader’s performance, which I think is marvelously rewarding and full of surprises, but definitely verges on dangerous territory in terms of gay typology or even stereotype. (Hader himself is heterosexual.) Then again, Milo is a struggling actor who waits tables at a Hollywood tourist restaurant; the idea that he’d be an affected and somewhat effeminate guy is not far-fetched. Despite his own self-description, Milo isn’t anything like a tragic gay cliché in the end; it’s his strength and resolution, even amid his own heartbreak and unhappiness, that pushes Maggie to face herself and her marriage with some degree of honesty. As she did in Liza Johnson’s “Hateship Loveship,” Wiig gives a hooded, veiled, potent performance as a woman who isn’t known even to herself. I’m not sure the world wants Wiig to forswear ha-ha comedy for these kinds of intense roles, but she’s an amazing actress.

Mark Heyman and Craig Johnson’s script for “Skeleton Twins” won the screenwriting prize at Sundance this year. What that means in English is that it follows a highly familiar indie-film template: the three-act family dramedy, ending with some degree of renewal and redemption. Ultimately this is more like a movie than a story about real life, but at least it’s a movie delivered with considerable compassion, delicacy and wit, built around unforgettable performances by two youngish actors whose dramatic upside is almost unlimited.