A killer app for the Apple Watch: Gun control 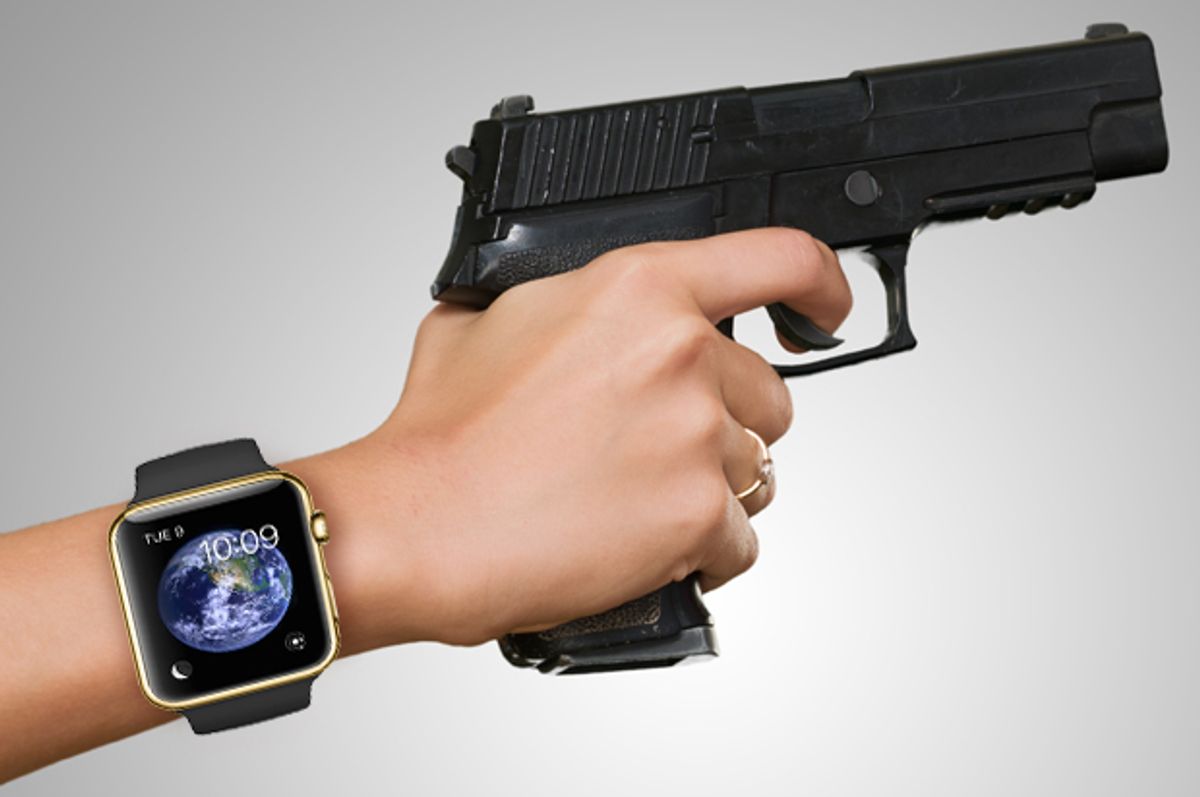 But nobody, so far as I can tell, has discussed the Apple Watch's applicability to the pressing social problem of stopping gun violence. And that's exactly the kind of gaping chasm your Salon Technology correspondent is delighted to plunge into.

Via Slashdot, it has come to our attention hat one week ago the Public Library of Science published a provocative investigation into whether wristband accelerometers could be employed to monitor "the subset of individuals at highest risk of involvement in fatal shootings based on research showing that the majority of both homicide victims and perpetrators are on probation, parole, or pretrial release..." The idea being that a judge could require that subset of individuals to wear a tracking device that could record now just where a person might be, but what he or she was doing.

According to author Charles Loeffler, of the Department of Criminology at the University of Pennsylvania, "wearable accelerometers" have proven useful at detecting and classifying "commonplace human behaviors." After running tests with the assistance of ten officers from the University of Pennsylvania's police department, Loeffler concluded that such devices could accurately determine whether subjects had indeed fired a gun -- and were able to distinguish the act of firing a gun from other common human activities, like hammering or throwing darts.

Consistent with recent advances in human activity recognition, the present study investigated the possibility that firearm use could be reliably distinguished from routine human activities and from known confusable activities using MEMs inertial sensor technology. The results suggest that accelerometer-based classification of firearm use is feasible and could form the basis of a wearable and affordable gunshot detection sensor system.

Some caveats! Unless these wristband accelerometers are equipped with some kind of electro-shock mechanism that can anticipate that a gun is about to be fired and send a jolt so strong that the gun is dropped, this application of wearable technology isn't actually going to stop gun violence -- it's merely going to make it easier to determine who has committed gun violence.

And I will concede: There are  some good questions as to whether an Apple Watch would be the right choice for widespread deployment for this type of task. At a starting price rumored to be around $349, it's probably not cost-effective. And if Apple Watch batteries only last a day, then the perp could just wait until the juice was gone to go on a spree. Also: making the Apple Watch mandatory would be a bad precedent, even if the ghost of Steve Jobs would be pleased at the prospect.

Yes, I may have crashed into a pile of sarcastic rocks at the bottom of that gaping chasm. But here's the thing. The science of "human activity recognition" is clearly going to be big. And when you strip away all the fashion and all the apps and all the rhetoric, that's exactly what the Apple Watch is poised to be: a human activity recognizer. Strap one of these gizmos to your wrist and it will be able to record what you do.