Protests continue in Ferguson as Darren Wilson remains at large

"We're getting ready to go to jail" 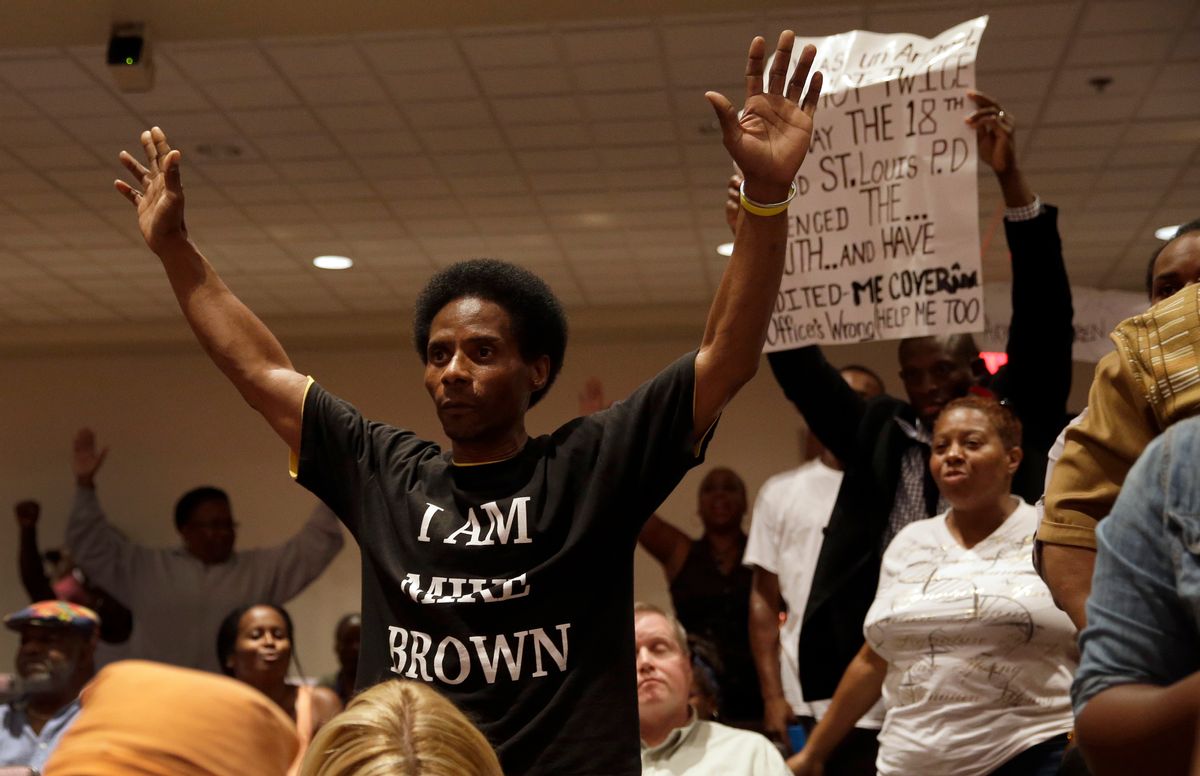 Larry Miller holds up his hands after speaking during a public comments portion of a meeting of the Ferguson City Council Tuesday, Sept. 9, 2014, in Ferguson, Mo. The meeting is the first for the city council since the fatal shooting of Michael Brown by a city police officer. (AP/Jeff Roberson)
--

Protesters in Ferguson, Missouri, gathered Wednesday afternoon on Interstate 70, with the intention of shutting down traffic during rush hour. The demonstration represents the continuation of the protesters' call for justice for the death of unarmed teenager Michael Brown at the hands of Officer Darren Wilson. As of Wednesday, Wilson remained at large.

As protesters began to gather before 3 p.m., a large police presence parked along I-70 near North Hanley Road. Protesters who tried to hang signs on overpasses or spell out their demands on a chain link fence with plastic cups were told they could not do so.

By 3:15, a group of about 125 protesters began to line up, saying they would to block the interstate. Police closed Hanley Road to traffic, and shut down the ramp from eastbound I-70 to Hanley.

"We're getting ready to go to jail," one protester said.

Police formed a line along North Hanley. "Do not block traffic on ramp to Interstate 70 or you will be arrested," a state trooper announced on a public address system. Police were trying to keep the demonstrators on sidewalks along Hanley. Protesters who stood or sat in the road and refused to move were arrested one-by-one in orderly fashion by police with zip ties.

At one point, there was a skirmish as someone threw a brick at St. Louis County police officers.

Organizers said the shutdown was to protest Gov. Jay Nixon’s refusal to appoint a special prosecutor to review the Aug. 9 fatal shooting of Michael Brown, 18, by Ferguson Officer Darren Wilson.

As of 5 p.m., aerial shots of the scene revealed that many more cops had arrived to quell the protest than had protesters.

On Tuesday night, Ferguson residents gathered at a tense first public City Council meeting since Brown's death. The council planned to present a number of ordinances aimed to reduce fees for arrests, warrants and court appearances. Instead, the council members were faced with a furious crowd and hours of testimony surrounding the fraught relationship between cops and Ferguson residents. Taurean Russell, a 30-year-old resident and activist, said in an interview with MSNBC: “What they’re offering ain’t enough ... We set the rules for now on. We’re trying to be considerate, issuing press releases and letting them know exactly what we plan on doing. We’re being nice. But the time for being nice is over.”