Taylor Swift and Katy Perry are both Regina George

Why are two of the biggest women in music acting like spoiled teens? 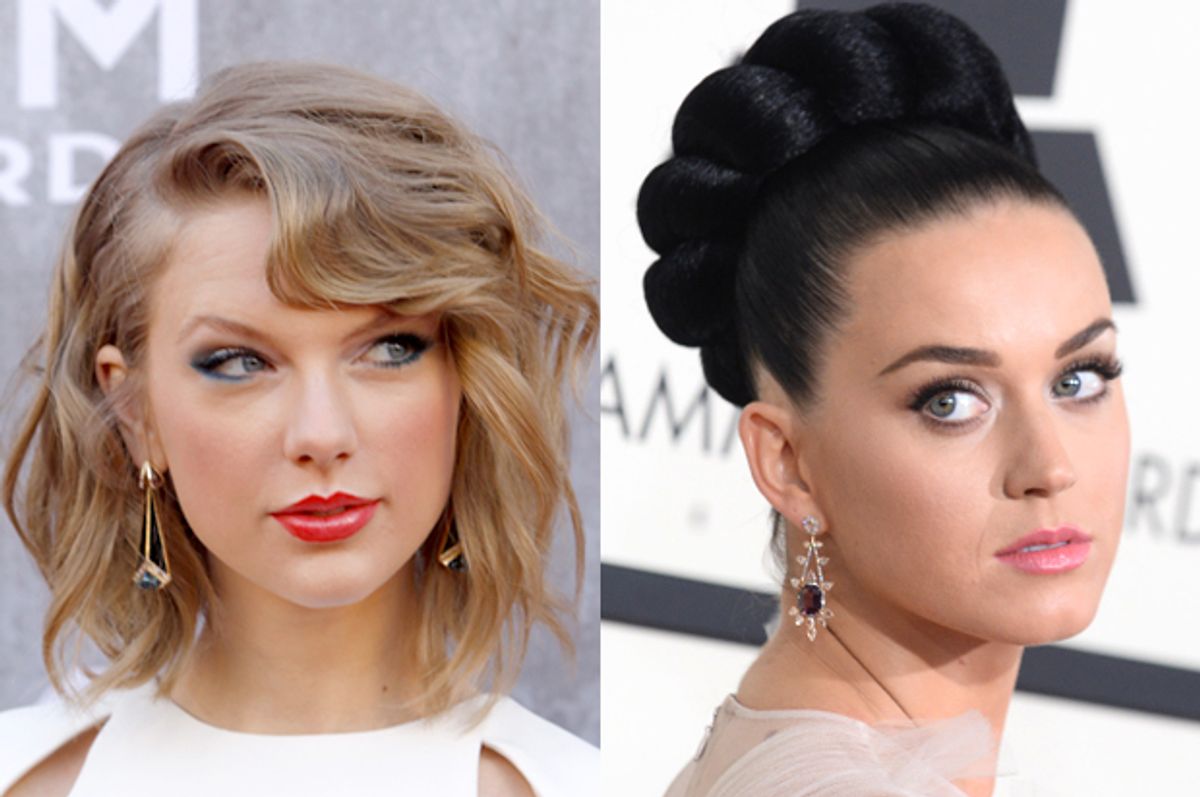 Omigod you guys. I can't even. I mean, first, Taylor was all, "We're just straight-up enemies" about somebody in that Rolling Stone interview. And then Katy was like, "Watch out for the Regina George in sheep's clothing... " on Twitter. And it's just so hard, you know? Because I wanted to invite both of them to my slumber party, and this whole thing is giving me all the feels. I mean, it's almost like I totally forgot they're adults!

In the most eagerly pounced upon quasi girl fight of the week, the first shot fired came from Taylor Swift, in an interview for Rolling Stone. In it, she explained the song "Bad Blood," from her new album, a song Rolling Stone says is "about another female artist Swift declines to name." But Taylor offers clues, saying that "For years, I was never sure if we were friends or not. She would come up to me at awards shows and say something and walk away, and I would think, 'Are we friends, or did she just give me the harshest insult of my life?'" But then, the woman "did something so horrible, I was like, 'Oh, we're just straight-up enemies.' And it wasn't even about a guy! It had to do with business. She basically tried to sabotage an entire arena tour. She tried to hire a bunch of people out from under me. And I'm surprisingly non-confrontational – you would not believe how much I hate conflict. So now I have to avoid her. It's awkward, and I don't like it." Swift does acknowledge that there may have been a more intimate element to the problem but says, "I don't think there would be any personal problem if she weren't competitive."

It didn't take long for Internet speculators to cast their suspicions about the source of the Bad Blood in the direction of Katy Perry, who, like Swift, has inexplicably dated John Mayer. The plot thickened further when fans begin piecing it together that some of Swift's dancers had defected to Perry's tour. As one of Swift's former dancers explained in an interview late last year, "I was with Taylor for the first six months. It was a great experience and she's a great person to work with, but then Katy contacted us.''

Perhaps not at all by coincidence, Perry tweeted her "Mean Girls" reference Tuesday, in what quickly became regarded as a subtweet of epic shade. Could it all have originally stemmed from Perry being poisoned against Swift by John Mayer, who inspired a fair portion of the not-so-vague disses on Swift's "Speak Now" album? I don't know for sure, and also, do these galaxy pants make my butt look big?

To recap: We currently have playing out in the court of public opinion a story in which Taylor Swift, aged 24, is granting interviews about the possible identity of her super competitive "straight up enemy" but not straight up naming names because she's so "surprisingly non-confrontational," while Katy Perry, who turns 30 next month, is referencing a movie about high school to say something? about somebody? but not really coming out and saying it because she's such a nice person? Just so you know, this is just so not about a boy; I can't even believe you would think that. This is about, like, integrity. Relatedly, which one of them do think is not allowed to wear hoop earrings?

Believe me when I say that I am the last person in the world to disapprove of thinking and living outside the box of one's calendar age. I am all for crying at "The Fault In Our Stars" and having a favorite member of One Direction, and I support the wearing of pizza festooned garments at any age. Whimsy and youthfulness are great. I'm not saying anybody needs to be Courtney Love. In fact, yeah, don't be Courtney Love.

But it's getting kind of sad watching ostensible grown-ups being so passive-aggressive. So…. immature. You want to pick a fight? Pick a fight and have a fight. But this whole arched eyebrows, "you know, some people" routine is so totes sketch it just makes me feel like I am LITERALLY one of those really, really sad emojis. I have a daughter who is an actual freshman in high school, and if any her friends pulled this kind of crap, she wouldn't sit with them in the cafeteria ever again.

Whether you're Team Taylor or Team Katy, we can all appreciate that both women are accomplished, successful singers and songwriters who have built major careers for themselves in a very tough industry. So why are they carrying on in a manner that would embarrass a middle schooler? Is it because they both work so hard to project the image of being sunny, bubbly good girls? If so, the veneer is starting to crack, kind of like when you reach the point in life when you realize nobody cards you any more. Life isn't the Disney Channel. And they're both getting too old for this.