An entire party of Roger Goodells: Calling out the GOP's domestic violence problem 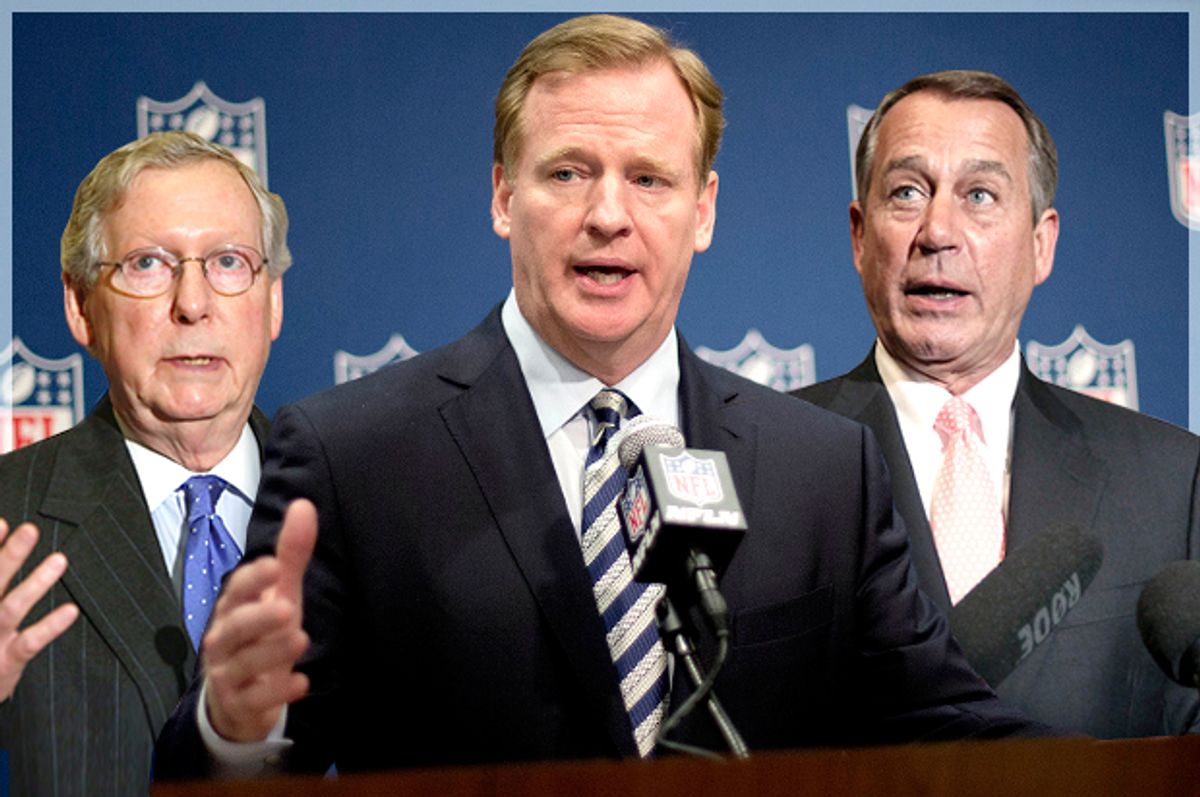 Calls to the National Domestic Violence Hotline surged after footage of former Baltimore Ravens running back Ray Rice knocking out Janay Rice was released to the public. "We had an outpouring of women saying, 'Oh my god, I didn't realize this happened to other people.' They thought they were living a life that was very unique to them," hotline CEO Katie Ray-Jones told Laura Bassett at the Huffington Post. "One woman called in who is married to a [mixed martial arts] fighter. She said, 'I just saw that video, and I know my husband could do worse, and I need help.'"

The 72 percent increase in calls means that more victims of intimate partner violence are seeking help, but the hotline was already struggling to meet the callers' needs. As Bassett noted, it just doesn't have the financial resources to serve everyone who needs support. "Last year, we didn't answer over 77,000 calls due to lack of resources," Ray-Jones explained.

The organization's budget was slashed last year as a result of the sequestration, the Republican-manufactured crisis that threw the National Domestic Violence Hotline and other service providers across the country into crisis, jeopardizing hundreds of thousands of women's lives.

As much as we need to be talking about the NFL's problem with domestic violence, it isn't the only three-lettered organization indifferent to women's humanity. From its position on the Violence Against Women Act to economic and social policies that are destroying the kinds of infrastructure that make it possible for women to leave abusive relationships, the GOP is fostering a culture of permissiveness around violence against women.

This week marks the 20th anniversary of VAWA, but last year, congressional Republicans were lining up to oppose the historically bipartisan measure. The Senate version of the bill included expanded protections for immigrant women, LGBTQ women and Native American women, a move opposed by many House Republicans.

VAWA is an imperfect and limited piece of policy, but its impact is felt daily. As Irin Carmon at MSNBC noted this week, among its many protections, VAWA safeguards victims who live in federally subsidized Section 8 housing from being evicted "on the basis of being victims of violence, and includes a new provision that allows them to transfer to a different residence." This small measure of protection shields women -- at least in these cases -- from homelessness, an issue women in private housing have faced after calling the police on violent partners. (Around 63 percent of women who are homeless have experienced domestic violence.)

Republican opposition to (or selective embrace of) VAWA is among the most obvious ways the GOP has displayed its indifference to the needs of victims. But perhaps more insidious is the GOP's economic agenda, which further marginalizes low-income women, women of color and undocumented immigrant women experiencing domestic violence.

Last year, the Republican-orchestrated shutdown locked down federally funded victims assistance programs like the Temporary Aid to Needy Families and the Victims of Crimes Act. The money drawn from these programs by state-level agencies and community-based organizations is used to reimburse crisis counseling programs, domestic violence shelters, long-term counseling programs as well as legal assistance for women leaving abusive relationships.

Providers across the country were clear about the consequences -- when already scarce financial reserves run out, operations shut down or are dramatically scaled back. That means women are left with nowhere to turn.

“The people I talk to are worried. They’re worried about serving victims,” Cindy Southworth, vice president of development at the National Network to End Domestic Violence, told me at the time. “Crisis service providers are the same as first responders. When we pick up the phone and dial 911, we expect a police officer to respond or the fire department to show up with a truck. If a woman is running for her life from her partner, we expect the same emergency response. We expect this in a civilized society, that there must be a safe place where she can go.”

But it isn't just budget cuts that leave service providers struggling; the policies that directly impact women's livelihoods can also be a matter of life and death when it comes to abusive relationships. One in three women are living in or on the verge of poverty, which amounts to 42 million women nationwide -- and 28 million children who depend on them. What's more, two out of every three minimum wage workers is a woman -- many are also the primary caregivers in their households. Republican intransigence on a modest raise to the minimum wage is locking these women into poverty.

Women leaving abusive relationships are often women transitioning to single-earner households. At the current minimum wage, a woman who works full-time averages around $14,500 each year. That’s $4,000 less than the poverty level for a mother of two children. Without basic financial security, women are often forced to remain in relationships that threaten their lives.

This is far from an exhaustive list of ways the the GOP holds victims of intimate partner violence hostage. The Republican romance with gun rights has proved deadly. (More than 60 percent of women killed by a firearm in 2010 were murdered by a current or former intimate partner. The presence of a firearm during a domestic violence incident increases the likelihood of a homicide by an astonishing 500 percent.) The Republican-led assault on reproductive freedom has major implications for victims of domestic violence. Republican resistance to mandatory paid leave policies means that women who need time off to leave an abusive relationship or are hospitalized after a domestic violence incident can lose their jobs for missing work.

This week, women across the country issued powerful condemnations of the NFL's disregard for women's humanity. Fox Sports' Katie Nolan called out the NFL's indifference, and said it's time for "women to have a seat at the big boy table, and not where their presence is a gimmick or a concept." Similarly, writer Jessica Luther recently told me that the NFL's failures on domestic violence are "the direct result of a whole lot of men being in charge of a whole lot of men."

The same could be said about so much of our politics. Our problem with domestic violence is bigger than one player -- and bigger than the NFL. As the public continues to voice its outrage, it should also look to our political leaders with the same anger. It's not just Roger Goodell who needs to be held to account.