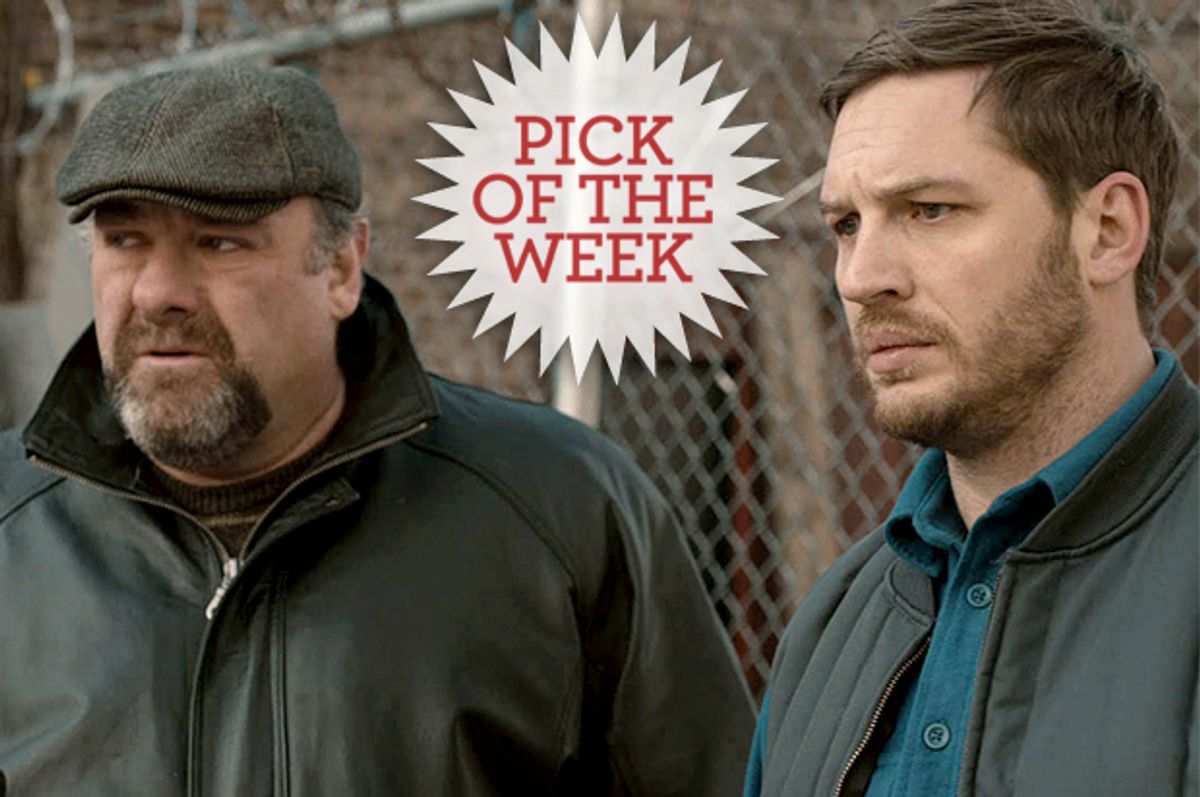 James Gandolfini and Tom Hardy in "The Drop"
--

The stylized and claustrophobic crime thriller “The Drop,” which is full of twists and traps for both its characters and the audience, doesn’t so much take place in the real Brooklyn of 2014 as in a fictional Brooklyn of the mind wrought from the borough’s colorful history. I’m sure someone will write in to tell me that old-time nay-buh-hood tough guys like the ones played by Tom Hardy and James Gandolfini in this movie can still be found in corners of Bensonhurst or Sheepshead Bay or wherever, but that’s not really the point. This vision of Brooklyn is the creation of crime novelist Dennis Lehane (who adapted the screenplay for this film from his short story “Animal Rescue”), who has established himself, across “Gone Baby Gone” and “Mystic River” and numerous other movie-friendly books, as the poet laureate of the white Catholic urban Northeast even as it fades toward extinction.

There are many reasons to admire this tense and tightly constructed film, which marks the impressive English-language debut of Oscar-nominated Belgian director Michaël R. Roskam, but one of the best lies in the alternately vulnerable and terrifying performance by Gandolfini, in his final film role. He isn’t playing Tony Soprano here, but a corrupt small-time goon named Cousin Marv, a guy more like one of the low-level mobsters whom Tony terrorizes and dominates, and who yearns to find a way to fight back. Marv was once the owner of the divey neighborhood tavern, and his name is still above the door, but years ago he had to settle a mysterious debt by surrendering the bar to a glossy-haired Chechen mobster called Chovka (the terrific Michael Aronov). So Marv lumbers on through life, doing a younger man’s bidding, bossing around his bartender and cousin, Bob (played by Hardy), and living in one of those tiny, knickknack-encrusted, outer-borough bungalows with his sister Dottie (Ann Dowd).

In the borderline-surrealist universe created by Roskam, cinematographer Nicolas Karakatsanis and their design team, Marv’s existence is like a living death, or a slow-motion version of hell: When Dottie dares to express the idea that they should cash in their house and their savings accounts and go travel, “go see things,” Marv answers without looking up from the sports page: “What things?” There are a couple of lines in “The Drop” that made the audience audibly gasp at the screening I attended, most notably the one when Marv tells one of his no-account acquaintances, “We’re all dead men walking. We just don’t know it yet.” We’re meant to see an immediate contrast between the battered and embittered Marv and Bob, the proverbial decent guy in an indecent situation. Bob narrates the beginning and end of the film, and he isn’t anywhere near as slow on the uptake as he first appears. But he has a position of Switzerland-like neutrality to uphold; he knows what goes on in the neighborhood but steers clear of the obvious bad guys, while trying to remain a mild nonentity in the eyes of the cops.

This is Lehane’s first produced screenplay (he has previously written episodes of “Boardwalk Empire” and “The Wire”), and you’re either going to respond to his hard-boiled, zinger-laden dialogue or you’re not. For my money this is a highly potent pairing of writer and director; Roskam pushes the suspense and paranoia to horror-movie levels as the mysterious events and aphoristic, misleading conversations of Lehane’s script begin to close around Marv and Bob like an invisible net. Cousin Marv’s Corner is one of a rotating network of bars used by Chovka’s crew as “drops,” where an entire evening’s illegal receipts for gambling and drugs and whatever else, from all over Brooklyn, will be gathered and collected. It isn’t a “drop night” when Marv’s gets stuck up by a couple of masked hoodlums, thankfully, but Chovka still isn’t delighted to have $5,000 of his money disappear into the night, and Bob and Marv need to do their utmost to get it back.

That mishap is not fatal, or at least not for the bar proprietors, but it attracts a lot of attention from undesirable quarters, including the seemingly friendly Detective Torres (John Ortiz), who attends 8 o’clock Mass with Bob every morning -- at a soon-to-be-closed Catholic church, a nice Lehane-ian touch -- and can’t help noticing that he never takes confession. Concerned that Bob and Marv are staging or planning a big inside job, Chovka insists that they handle the million-dollar drop for the biggest gambling day of the year: Super Bowl Sunday. (Snippets from the actual Denver-Seattle game earlier this year are overheard, a marketing and licensing triumph of sorts.) While they prepare for the big event, Marv and Bob need to wash off a bunch of blood-stained cash, get rid of a severed arm (with a stopped watch) and – oh yeah! – discuss Bob’s unexpected acquisition of a new girlfriend and a new puppy.

At first, the abused pit bull that Bob finds in a trash can outside the house of a waitress named Nadia (Noomi Rapace) seems entirely unrelated to the story about Bob and Marv and Chovka and the money, and the question of who is double-crossing whom and why. Except no, it actually doesn’t. Roskam understands the essential dream-logic at work in Lehane’s best stories, where nothing is ever coincidental. It’s obvious that Nadia has some relationship to the dog, either literal or metaphorical – the first thing Bob notices about her are the potato-peeler scars on her neck. And Nadia’s tentative romance with Bob, cemented by their mutual adoption of Rocco the (irresistible) puppy, lures in a notorious local character called Eric Deeds (Matthias Schoenaerts, the star of Roskam’s memorable first feature, “Bullhead,” as well as Jacques Audiard’s “Rust and Bone”).

In case you’re keeping score, that makes an Englishman, a Swedish woman and a Belgian, playing the three legs of a potentially violent Noo Yawk triangle. That sounds like a disastrous multinational farrago, but honestly they’re all terrific and I never had a problem with it. If Hardy’s Brooklyn accent feels a little studied, he’s such a powerful physical actor that he commands the screen anyway. Rapace is playing a Russian immigrant, which is no problem, and she can do hunted, haunted and damaged like nobody’s business. Schoenaerts is so scary and so convincing as Eric that I didn’t realize he was a foreigner until I looked him up later. As I’ve said, the world of “The Drop” isn’t entirely naturalistic and isn’t meant to be. Even if you want to argue that these characters represent some plausible 21st-century urban reality, they’re also specters or projections or archetypes drawn from all the other crime stories we’ve read or seen.

If you know Lehane’s work, you don’t need me to tell you that none of these people, Bob and Nadia included, is entirely as they seem to be on the surface. I suppose we can except Chovka, who never pretends to be anything other than a slimy, murderous and manipulative Chechen crime lord. (Aronov deserves an Oscar for the way he milks an extended moment when Marv and Bob serve him a shot of small-batch Irish whiskey and stand around hoping he’ll like it.) Oh, and here’s a small but necessary spoiler: Rocco the dog has no dark secrets, and is just fine. Look, be warned: “The Drop” is a bloody and downbeat fable whose final twists are not going to send you out of the theater humming the “Ode to Joy” or anything. But I found this dark odyssey through an amoral dream Brooklyn curiously invigorating; it’s a masterful construction that held me rapt from first shot to last, that builds intense electrical energy and then releases it. While it’s heartbreaking to see the grace and grief and tragedy of Gandolfini’s final performance and realize that he’s gone, it’s one hell of a movie to go out with.