There's nothing "shocking" about growing up 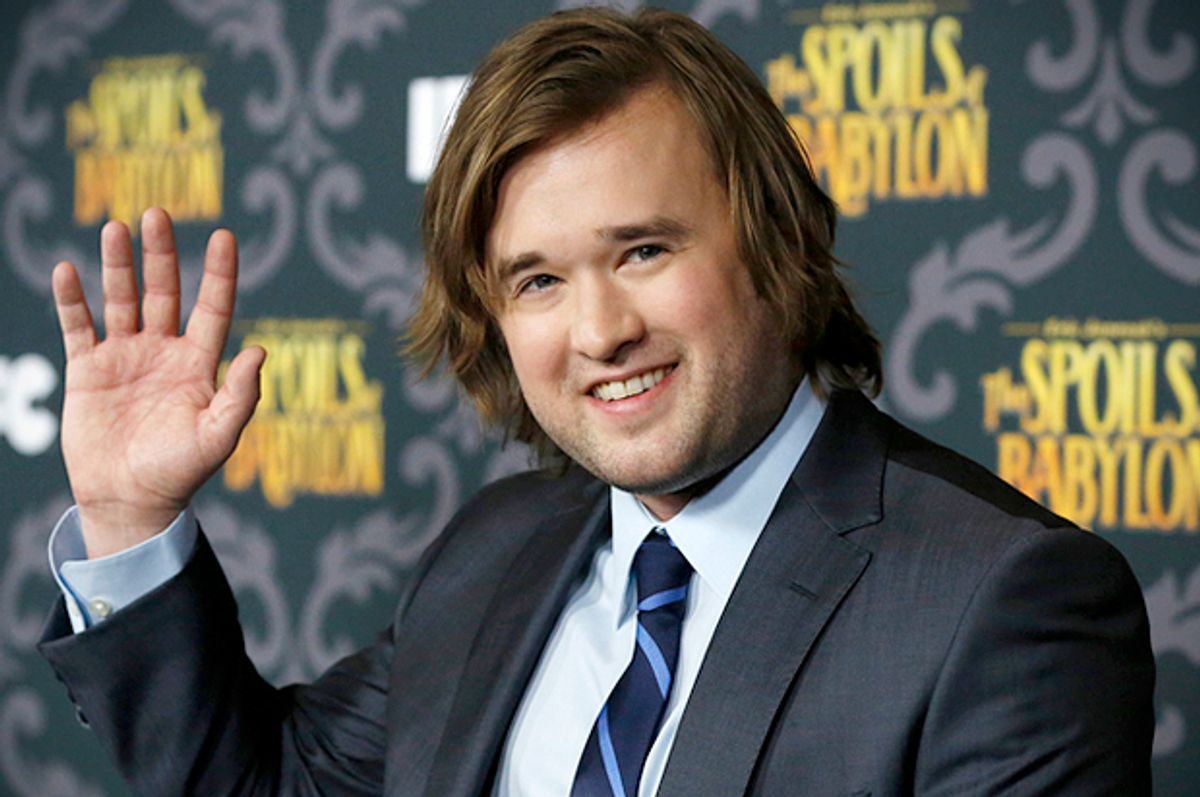 Pity the unfortunate celebrities who have not mastered the art of being impervious to time. The latest earthshaking example of this phenomenon is Haley Joel Osment, the 26-year-old actor who inspired a slew of headlines this week after photos appeared of him from the set of Kevin Smith's new movie "Yoga Hosers." In the film, Osment plays the real-life Nazi supporting Canadian journalist Adrien Arcand, and let me tell you, the fact that Osment has physically changed in the 15 years since "The Sixth Sense" came out – when he was a child -- is just mind-blowing.

Popdust reports that the actor was "a tremendously successful, and super cute, child star back in the 1990s" but is now "absolutely unrecognizable with a mustache, slicked-back hair and, shall we say, hefty physique," noting, "Child Star to Chubby Nazi—Haley Joel Osment’s All Grown Up, but Not in a Good Way." Hollywood Life provides a helpful "Before" and "After" of his "shocking transformation," while Us calls him "unrecognizable" in the "crazy picture" from the set. E! similarly calls him "completely unrecognizable" and muses that "Osment seems to have gained a bit of weight for the role in the future film," while Complex wryly observes that "He used to see dead people. Now, it looks like all Haley Joel Osment sees is McDonald’s."

Along with the gotcha! wardrobe malfunction, the "Can you even believe it that a human being is subject to the laws of time and physical progression?" story is a reliable page views grabber. Throw in wrinkles, weight or any possible cosmetic surgery and you're particularly golden. Three years ago, the Internet blew a gasket when Sinead O'Connor, who was once 20 years old,  appeared in public, in the words of an Inquisitr headline, "No Longer Bald or Skinny." Fortunately, she had the decency to lose weight before the release of her new album earlier this year, prompting inevitable headlines about her "dramatic makeover." And when the 81-year-old Kim Novak appeared at the Oscars this winter with an unusually taut, immobilized countenance, critics were swift to mock her "wax museum" appearance. These are your options, people. You can get older in whatever natural form that may take and be made fun of for it, or attempt to remain youthful and be made fun of for it. Basically, unless you master some vampire-like secret of remaining a fixed age and size for eternity, you're screwed.

Yet to all the bottom-feeding dispensers of celebrity pot shots out there, I'd like to ask, wouldn't the truly mind-blowing thing be for Osment to have remained an 11-year-old indefinitely? Wouldn't it be more newsworthy if Osment, who this week graciously acknowledged that "When you're a kid and you grow up, it takes some time for people to associate you with more things other than that initial thing," had somehow avoided adolescence and adulthood altogether? I still have a picture of my elder daughter from 15 years ago, the summer that "The Sixth Sense" came out. It's an ultrasound. Would you like to see it? Because you won't believe her SHOCKING TRANSFORMATION from a fetus to teenage girl.

Osment, who has managed to work steadily his entire career, did not disappear off the map one day and emerge as a man the next. He didn't just step out of a TARDIS. He did a funny, confident turn with Kristen Wiig just earlier this year in "The Spoils of Babylon"; where were you for that, E! and Complex? And is it really shocking that he's now been photographed on the set of a movie, in character?

Time treats us all differently, and I'm not immune to the curiosity factor of that. I can certainly cop to occasional bogglement that Rob Ford and I are of the same generation. But if you're publicly piling on people for changing – and especially piling on people for changing from children into adults – you are a mean, petty person. And while that may not be shocking, it sure is depressing.