Why do athletes keep avoiding punishment when women get hurt? 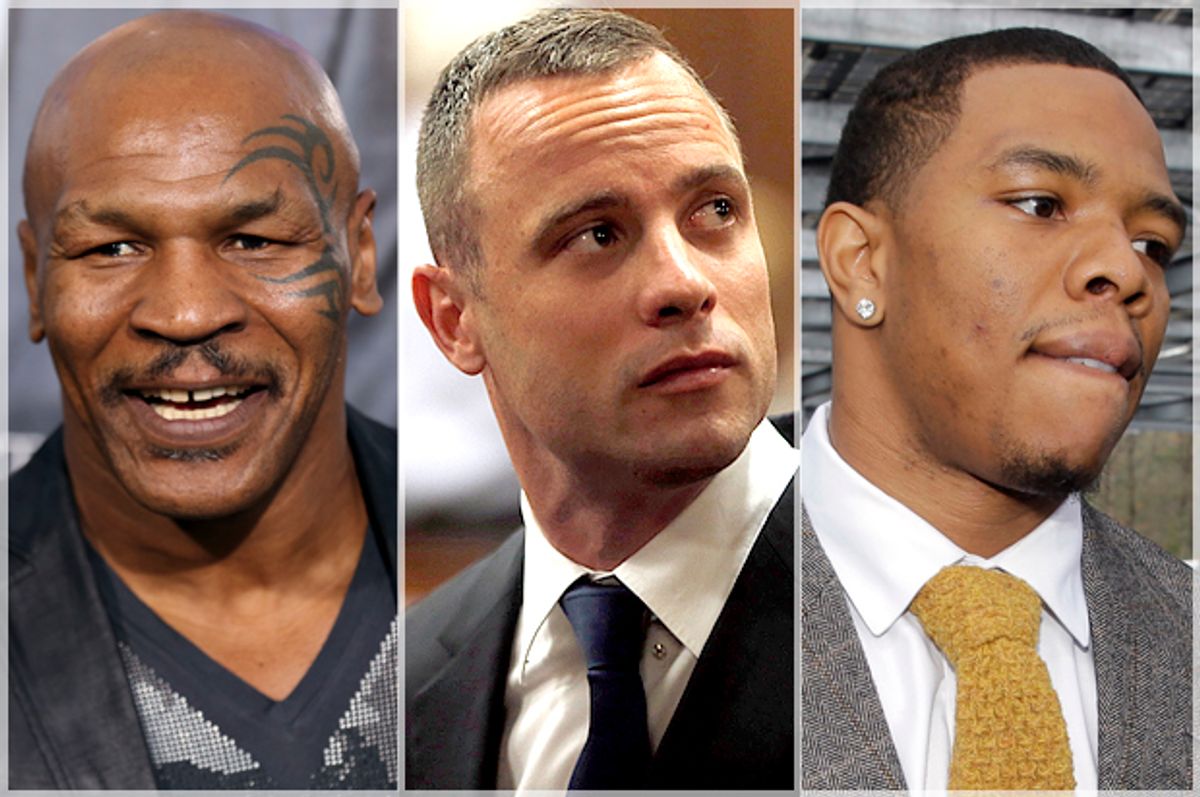 In Pretoria on Thursday, a judge brought the six-month trial of Olympic and Paralympic athlete Oscar Pistorius close to an end with a not guilty verdict in the murder charges stemming from the 2013 death of his girlfriend, Reeva Steenkamp. Though he still faces a ruling in one charge of unlawful homicide and possible prison time for it, Pistorius' future is looking reasonably bright for a man who shot and killed a woman.

Pistorius' defense has always maintained that the death of Steenkamp was a terrible accident, that Pistorius had acted on the mistaken belief that he was shooting an intruder. And based on the court's decision, that appears to be how he is viewed in the eyes of the law. But the story of Pistorius' fate, compared to that of the woman close to him, comes in a week in which the questions about male athletes, violence and privilege could not be more abundant or demoralizing.

Even if we accept that the verdict in his murder trial was fair and correct, Pistorius' history remains far from spotless. A 2012 New York Times profile described him as "more than a little crazy" and noted that "the people around Pistorius worry about his risk-taking." Last year, after the death of Steenkamp, South African police confirmed that they had previously been called to his home to deal with "domestic incidents." And earlier this year, Pistorius reached an out-of-court settlement with another woman over 2009 assault charges, after she claimed he'd broken a door at a party and hurt her leg.

The Pistorius verdict also comes just one day after Mike Tyson, displaying all the rage and entitlement of a man who'd doesn't like the world to be reminded of his misdeeds, flipped out during a Canadian interview in which reporter Nathan Downer mentioned that the former heavyweight boxing champ is also "a convicted rapist." "I don't know who said that; you're the only one I heard say that," Tyson replied, adding, "It’s so interesting because you seem like a nice guy but you’re really a piece of s—t." And by the way, the answer to "who said that" is the jury that convicted him in 1992 of sexually assaulting Desiree Washington, and sent him to prison for three years. Downer then publicly apologized via Twitter, saying, "Unfortunately my question hurt Mike Tyson's feelings. That was not my intentions. My apolgies [sic] for the language." Sure, because what really matters when a guy gets a public platform to promote his one-man show is to conspicuously not hurt his feelings by mentioning that he's a rapist.

There was also, just this week, the release of the video of the Ravens' Ray Rice punching his then-fiancée Janay Palmer earlier in the year. The league has vehemently insisted it didn't see the full damning footage until TMZ released it Monday, but an AP story this week indicates evidence that the video was received by an executive at the NFL in early April. And though Rice has now been released from the team and is currently suspended indefinitely from the NFL, the more than six-month delay between the incident and any decisive movement from the franchise – especially in light of lingering questions over how much it knew about the explicit details of it – seem to indicate a pretty casual attitude toward violence against women and impact on a player's career.

And as long as we're talking about football, let's throw in Florida State's newly announced investigation into Jameis Winston, stemming from a 2012 accusation of rape. An ESPN report last week notes that "School officials interviewed the woman for the first time in early August." It only took two years and an explicit, detailed exposé by the New York Times.

Oscar Pistorius is not Mike Tyson or Ray Rice or Jameis Winston. What happened to Reeva Steenkamp on that February night in 2013 is its own tragedy. But we have got to look at the bigger picture of what happens when a successful athlete is accused of a violent crime against a woman, because there's a pretty clear pattern that you only need to look over the past week to see. It's one in which it takes too much time and the intervention of TMZ to get any serious attention to a problem, one in which a convicted rapist gets an apology for being reminded that he's a rapist. And unless we stop treating athletes as invulnerable to consequences, we're sending the message to boys and men that the best way to get away with hurting women is to play a sport.