It's disgusting, and it's still about race: Southern Republicans simply don't want minorities to vote

The latest chilling example in Georgia is part of a long, shameful history of how Republicans win elections 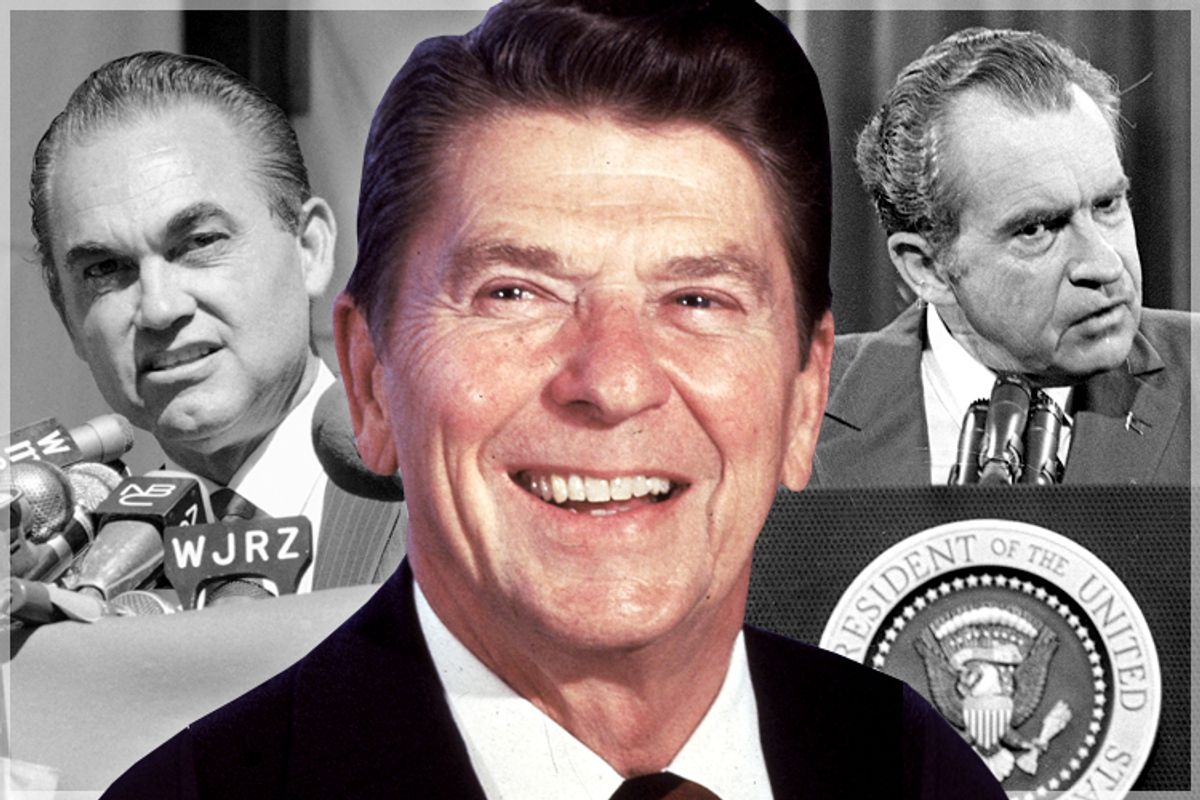 Sometimes conservative politicians, particularly those who hail from the South, accidentally forget to dog-whistle and they say what's really on their minds. It's always revealing.

Take the Georgia secretary of state, for instance, who just this week gave a speech about voting "integrity" and told his Republican audience, "the Democrats are working hard, and all these stories about them, you know, registering all these minority voters that are out there and others that are sitting on the sidelines, if they can do that, they can win these elections in November." That was actually a rare slip-up in an otherwise pretty slick speech where he obliquely referred to ACORN and its alleged misdeeds and bragged about how the state is making it really complicated to register online so as to root out (nonexistent) voter fraud, wink, wink. (That last seems like a dubious strategy for a party that is dependent on elderly, rural white voters ...)

But after you isolate all the clever obfuscation, you see that he is simply saying that Democrats are registering too many racial minorities and that will inevitably hurt the ball team. This is, of course, an old story that goes back to Reconstruction. In those days the Southern conservatives all gathered in the Democratic Party, but any party with which those particular folks identify gets upset at the prospect of racial minorities voting. Such things as "citizenship tests" and poll taxes are no longer available to them so they have to rely on subtler ways to ensure that this group of citizens are kept from voting their interests.

It used to be strictly African-Americans about whom these fine folks were worried but the modern GOP has been pretty concerned about the Latino vote for some time as well. As long ago as the early '60s, Arizona Republican activist (and future chief justice of the Supreme Court) William Rehnquist was involved in something called Operation Eagle Eye. This document in the LBJ library, which Rick Perlstein found for his book on the Goldwater campaign called "Before the Storm," lays out the strategy:

John M Bailey, Chairman of the Democratic National Committee, charged today that "under the guise of setting up an apparatus to protect the sanctity of the ballot, the Republicans are actually creating the machinery for a carefully organized campaign to intimidate voters and to frighten members of minority groups from casting their ballots on November 3rd.

"'Let's get this straight,' Bailey added, 'the Democratic Party is just as much opposed to vote frauds as is the Republican party. We will settle for giving all legally registered voters an opportunity to make their choice on November 3rd. We have enough faith in our Party to be confident that the outcome will be a vote of confidence in President Johnson and a mandate for the President and his running mate, Hubert Humphrey, to continue the programs of the Johnson-Kennedy Administration.

"'But we have evidence that the Republican program is not really what it purports to be. it is an organized effort to prevent the foreign born, to prevent Negroes, to prevent members of ethnic minorities from casting their votes by frightening and intimidating them at the polling place.

Republicans who buy the nonsensical insistence by vacuous right-wing operatives that Democrats are the real racists because the Southerners used to vote for them will be very confused by this. Obviously, the parties switched places over civil rights. But then you knew that, of course. In any case, these vote suppression tactics have been going on for a very long time. A certain type of conservative voter really does not want racial and ethnic minorities to vote, for some reason.

But there was one event in more recent history that really focused their attention and made them extremely nervous. It happened in the mid-1980s during the height of the Reagan revolution when movement conservatives were riding their greatest wave of success. That event was the Jesse Jackson campaign and his rainbow coalition. It was something of a precursor to the winning coalition that Barack Obama was able to put together 20 years later and spelled danger to the more perspicacious of Republicans. That's when they started to organize in a more systematic fashion.

Back in 2004, the Center for Voting Rights put together a report on the GOP's vote suppression strategy.  They interviewed many people involved in campaigns during the period, including Donna Brazile who had been Democratic presidential candidate Al Gore's campaign manager in 2000. She had worked for Jackson's campaign and saw that by 1986, the Republicans had started to initiate massive voter roll purges (of the kind that thwarted Gore's victory in 2000 in Florida). All over the country the Republicans were putting volunteers to work as they always had to ensure that the vote among their rivals, particularly in the minority communities, was kept as low as possible. But they soon discovered that they needed something more professional and so they created the Republican National Lawyer's Association, which the report describes like this:

A group of lawyers who had worked on the Reagan-Bush campaign in 1984 were behind its founding, and it was designed “to be a sort of Rotary Club for GOP stalwarts,” according to a contemporary article in Legal Times magazine. The RNC helped the association get off the ground with a $5,000 loan, although today the RNC claims no official connection with it. By 1987 the RNLA had active chapters in several states and the District of Columbia, and planned to hold its first annual convention early the following year. A lure for attendees, the planners hoped, would be continuing legal education credits and a possible appearance by Attorney General Edwin Meese III and President Reagan.

The RNLA turned out to be much more than a Rotary Club for GOP lawyers, however; it became the predominant Republican organization coordinating ballot security. By its own account, in early 2004 it had grown to “a 1,900-member organization of lawyers and law students in all 50 states.” Its officers were experienced lawyers who knew their way around Washington as a result of having served in Republican administrations at the national and state levels and in major K Street firms. Michael Thielen, its current executive director, who earlier worked for the RNC, describes the organization as follows: Since 1985 the RNLA has nurtured and advanced lawyer involvement in public affairs generally and the Republican Party in particular. It is accurately described as a combination of a professional bar association, politically involved law firm and educational institute. . . . With members now in government, party general counsel positions, law firm management and on law school faculties, the RNLA has for many years been the principal national organization through which lawyers serve the Republican Party and its candidates.

Their finest moment came in 2000 when the call went across the land for lawyers to converge on Florida to help litigate the disputed election. They were very good, having been schooled for a couple of decades in the dark art of election stealing. (And just as his predecessor had done several decades before, the future chief justice of the Supreme Court, John Roberts, did his part.)

Eventually the vote suppression effort broadened even further with new groups like ALEC at the state level, eventually  resulting in a 5-4 Supreme Court decision upholding the spurious voter ID laws (despite the fact that there is no evidence of systematic voter fraud anywhere in the country.)

The Georgia secretary of state, Brian Kemp, does not appear to be a current member of the Republican National Lawyer's Association. However, his former general counsel and chief legal advisor until 2013 is. And here he is pictured on the RNLA's Facebook page. And considering the RNLA's blog praises him to high heaven for admonishing the first lady for having the temerity to call out the fraud that is voter fraud, it's safe to say that Kemp is sympatico with their goals. And he is one of many Republican officeholders they have trained for a couple of decades now to keep that minority vote down as low as they can. For some reason they seem to think that racial minorities will never vote for them. You'd think it would occur to them at some point that their decades of vote suppression efforts might be one of the reasons.

Oh, and for those who insist that in his speech Kemp was only saying that Republicans should match the Democratic registration efforts, this week he announced his office was investigating alleged voter fraud by a group registering minority voters. The group was surprised since they had contacted the secretary before their voter drive to ensure they were following the law to the "t."

But Georgia is facing what might be a close election for governor and the U.S. Senate.  Republicans aren't taking any chances.