Robin Givens: "This is what happened to me" 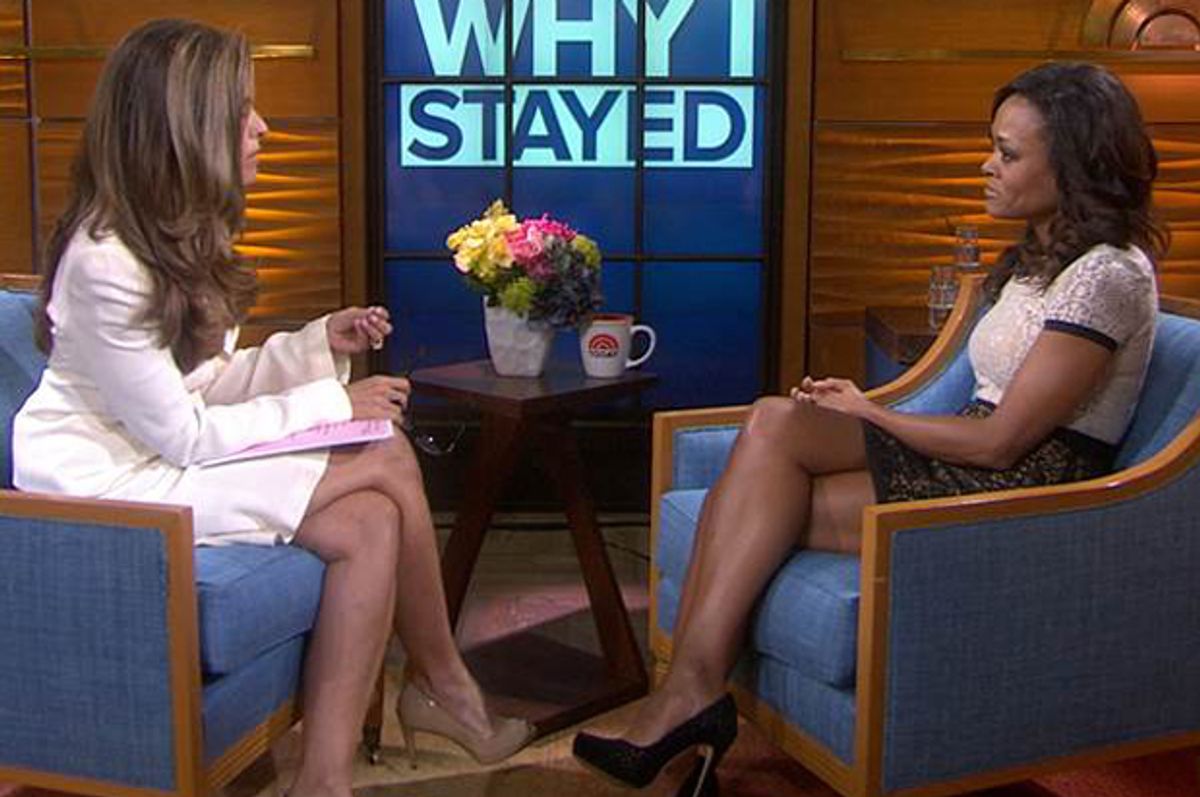 If you want to understand why a woman might not just find herself  in an abusive relationship, but staying in one, listen to a woman who says she's been there. Listen to someone like Robin Givens.

In a week in which plenty of football fans have publicly thrown their support behind ousted Ravens player Ray Rice, expressing sentiments like, "I just don't believe one action or mistake should define a person," a week in which Fox News' solution to domestic violence is to not commit it in front of a camera, it's pretty easy to feel demoralized. But there have been a few encouraging aspects of the whole depressing fiasco, notably the way it's opened up the conversation about the dynamics of abuse – why victims stay, and why they leave. And 26 years after their tempestuous marriage, it's put Mike Tyson and Robin Givens in the spotlight again.

Both the former champ and his actress ex-wife have been making the media rounds in the past few days, with markedly different results. During a Wednesday appearance on Canadian television, Mike Tyson lost his cool when interviewer Nathan Downer accurately referred to him as "a convicted rapist," replying to him that "I don't know who said that; you're the only one I heard say that," and calling Downer "a piece of s__t." (Downer later issued the mea culpa on Twitter that "Unfortunately my question hurt Mike Tyson's feelings. That was not my intentions.")

Tyson may not enjoy being reminded of his past, but another person well acquainted with his wrath, Robin Givens, is considerably less concerned about his possible hurt feelings. In an essay for Time inspired by the social media trending topics #WhyIStayed and #WhyILeft, she writes about how when she first heard of the Ray Rice incident earlier this year – and of his initial light two-week suspension -- she thought, "Great, here we go again. No one cares, he can do anything." Because she says she'd lived through it. "When I came to," she recalls, "a doorman was carrying me over his shoulder, out of my fiancé's apartment, and into a car." She says she was "embarrassed," and that she struggled with "inner turmoil and confusion." Then, as often happens in abusive relationships, "One minute you're running from him, the next you're protecting him. And being a black woman you feel you want to protect your man. You think, the black man in America has it so difficult anyway, so now you're turning them in. It feels like the ultimate betrayal." That this still goes on, with the degree of frequency it does, a generation later, seems an almost insurmountable cycle. But Givens believes there's hope in the fact that now more of these incidents are being documented on camera. Calling this a "watershed moment," she says, "No matter what people are told, it's hard for anyone to believe that a man could do this kind of thing unless they actually see it."

On the "Today" show Friday, Givens – looking solemn and emotional -- spoke more about the ways surveillance and social media are raising awareness of domestic violence, telling Maria Shriver, "We can't pretend it's not happening ... It's hard to be believed. Being believed is an issue  ... You don't want this to be true."

What makes domestic abuse – both physical and sexual – so particularly insidious is that it is so often difficult to prove. Without hard evidence, and in situations in which the victim him- or herself often feels ashamed and protective, it goes largely unseen. And what's unseen can easily be, for the rest of us who haven't firsthand experience of abuse, abstract. It's hard to reconcile the public and the private. But that's changing. In 2013, Sara Naomi Lewkowicz unveiled in Time a shocking and powerful series of photographs of a family in the throes of domestic violence, with the explanation that "Despite a movement to increase awareness of domestic violence, we still treat it as a private crime, as if it is none of our business."

That's why both the images of the Rice video and the words of individuals who've been in similar situations are so powerful and so necessary. Abuse thrives in secrecy. It counts on the complicit silence of victims. It presumes that a world that sees a placid façade won't notice the cracks. But we can't look away any longer. And maybe now, decades after Givens' own experience, things can start to get better. Because as she says, now, "This conversation will never be the same. You can't hide it so much anymore.''