As the "Ellen" show tries to wring every last drop of stardom out of "Apparently" kid, a call to stop the madness 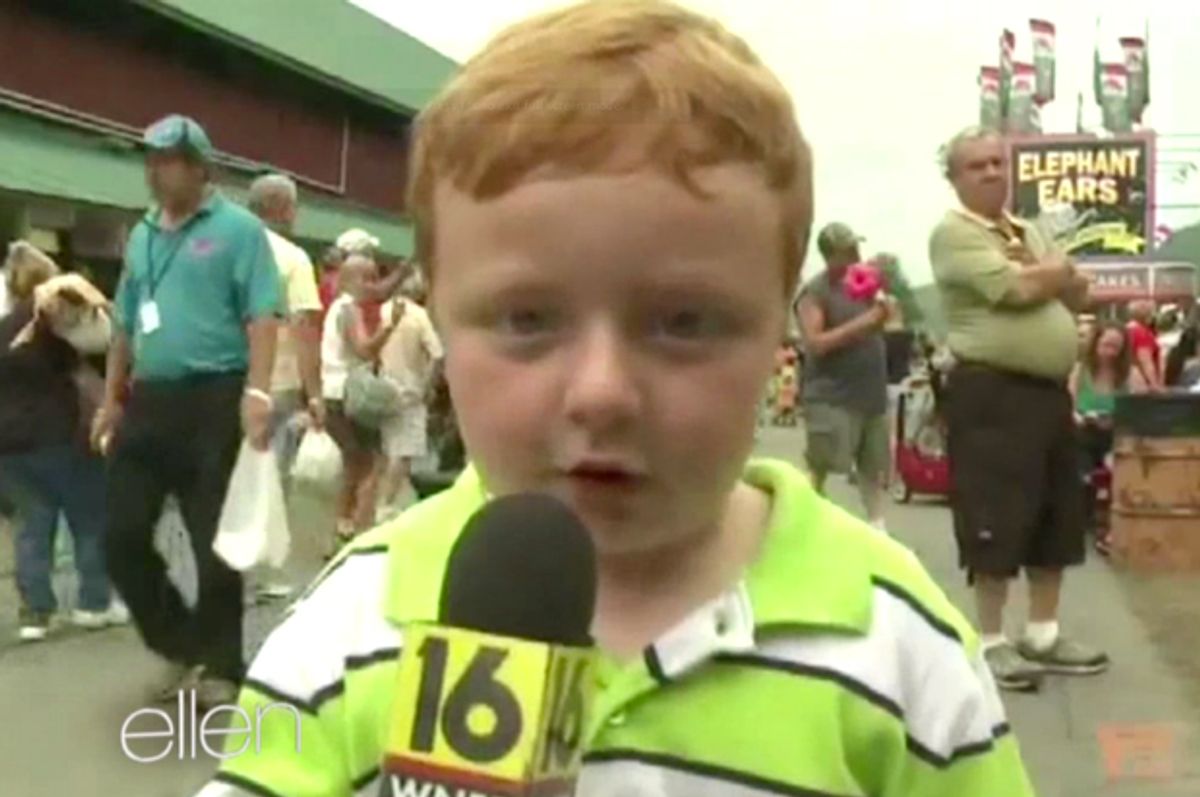 Ellen DeGeneres, after having launched British youths "Sophia Grace and Rosie" into the viral pantheon, did it again with "Apparently Kid," a child who used the word "apparently" a lot on a local news broadcast. Whatever it had been that was cute about young Noah Ritter (if that's your thing) was sapped of all spontaneity. The poor kid tried self-consciously to be entertaining, raising his arms and dancing around.

When Sophia Grace and Rosie appeared on YouTube, their performance of Nicki Minaj's "Super Bass" had felt like kids being kids. But on Ellen's couch they were antic and stagey, as though they'd been coached to keep the energy level up no matter what. The pair's performance, with one bopping silently as the other elided most of the R-rated words in Minaj's song, bore all the signifiers of "cute" (children in pink dresses acting precocious) with none of the actual, you know, cuteness. So let this be a warning to all talk show hosts: It's time to stop trotting out pint-size viral sensations for the benefit of your viewership, straining to wring from them every last drop of stardom.

A talk show is really no place for a kid. Even adult celebrities who are accustomed to attention turn annoying when given the opportunity to chat about themselves for 10 minutes. So why should we expect civilian children thrust into the spotlight by pure accident to do much better? And yet we keep trying. Ellen is probably the worst offender at the crime of putting kids on display and forcing them to attempt to recapture their lightning-in-a-bottle virality. If Sophia Grace or "Apparently Kid" were just a tiny bit older, they would surely be treated like Cecilia Cassini, the preteen designer whose staginess in describing her design career on "The Nate Berkus Show" got her pilloried. Or like teen movie critic Jackson Murphy, who came off like a bit of a know-it-all for his "Tonight Show" spot in 2012.

Kids should be kids -- and on YouTube or in a dopey local news segment, they basically are. But once there's a flight to a Hollywood studio involved, the temperature shifts. Ellen DeGeneres' show will always have guests acting over-the-top to get the audience's attention, but at least Julie Bowen is clear on what she signed up for.