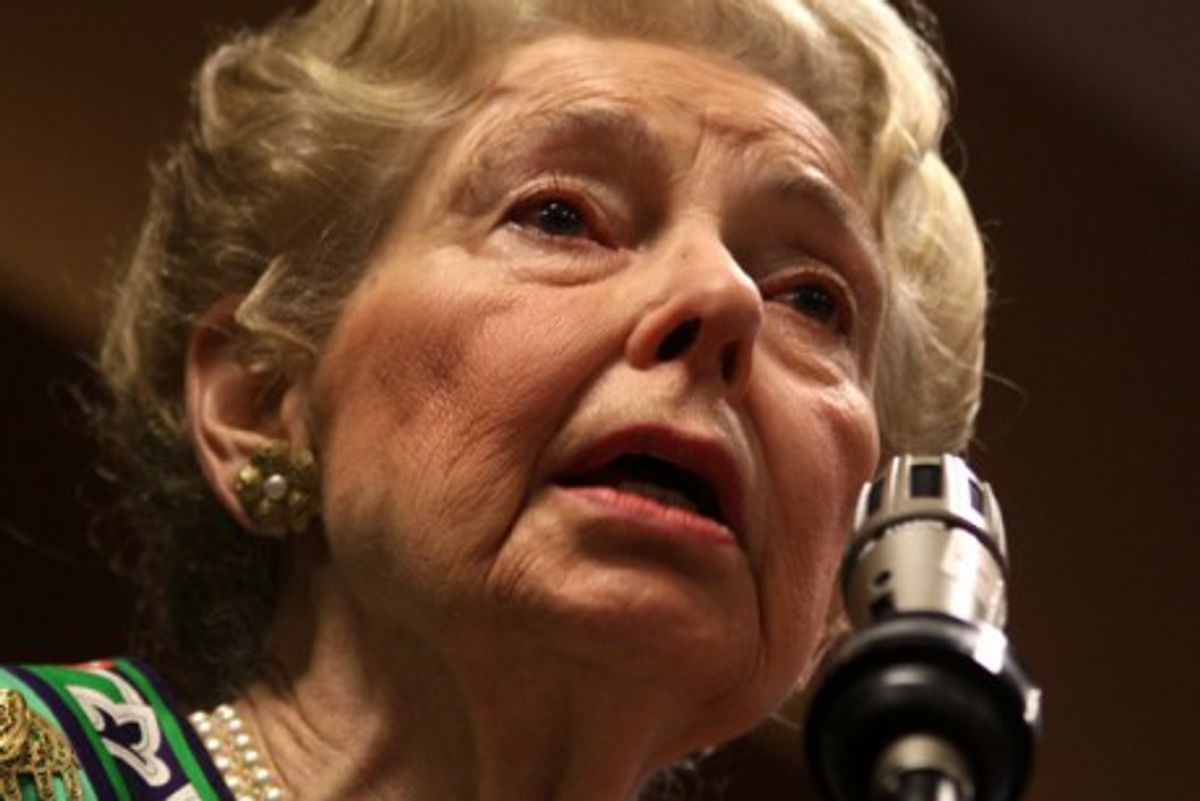 A lot of people assume the term "female misogynist" is an oxymoron. How can a woman be opposed to the fight to help women achieve equality? The sad fact of the matter is, as long as there has been feminism, there have been women who find it personally advantageous to reject feminism and instead argue for continuing social systems that perpetuate women’s inequality, male dominance, and even violence against women. (There were even plenty of women who were willing to argue against women’s suffrage back in the day.) Here is a list of nine women who have made a career out of opposing women’s struggle for social, political and economic equality.

1. Christina Hoff Sommers. Sommers is a pioneer in the art of arguing that it’s men who are actually the oppressed class in modern society. Her 2000 book The War Against Boys tried to argue, falsely, that feminists are ruining young men’s lives by oppressing them through the educational system. (Somehow those distressed young men continue to graduate and go on to have better job opportunities and make more money than their female peers.) She was most recently spotted offering her support to an organized online campaign to harass a young video game developer over her sex life.

2. Cathy Young. While Christina Hoff Sommers specializes in facetious claims about imaginary feminist oppressors, Young focuses on minimizing the problems of sexual abuse and harassment of women. Recently, she made a shoddy and dishonest claim that men get harassed more than women online, a claim that necessarily leads to the conclusion that women’s greater stress over harassment must be the result of their inferior constitution. Young also objects to the new movement to pass laws requiring men only to have sex with women who want the sex, on the grounds that men can’t be expected to handle something as simple as reciprocity.

3. Jill Stanek. Many women have found their calling in attacking contraception and abortion access, but Stanek, an ardent blogger, brings a hatefulness and obsessiveness that helps her stand out from an already unpleasant crowd. After getting old enough that unwanted pregnancy stopped being a personal concern, Stanek “discovered” that contraception has been evil all along, dedicating much of her blog to arguing that pregnancy prevention is a uniquely modern evil. Stanek also notoriously celebrated domestic violence, arguing that men should hit women who have abortions. “That spontaneous slap was the reaction of a real man who a woman had just told she aborted his baby,” she said of a notorious scene in Godfather II in which a gangster hits his wife. “Compare that to the modern-day cowardly male response, ‘It’s your choice. Whatever you decide, I’ll support you.’”

4. The Politichicks. Ann-Marie Murrell, Morgan Brittany and Dr. Gina Loudon are Internet video hosts who run a show called Politichicks and have a new book out arguing that women don’t actually want the equality feminists are fighting for. They laid out their philosophy recently on Fox & Friends. “Beyoncé’s argument,” complained the host, “is that it’s okay for women to be sexual beings just like men are sexual beings.” The Politichicks agreed that this was absolutely outrageous, arguing that feminists are actually “sexualists” and that feminist insistence that women like sex just like men do encourages violence against women.

5. Janet Bloomfield. Bloomfield is supposedly the PR representative for the anti-feminist website A Voice For Men, but her take on public relations is much different than the way most people understand the term, as she spends most of her time harassing and abusing other women online. Indeed, her Twitter harassment got so bad Twitter actually banned her account, though she immediately started a new one and began her harassment anew. Bloomfield’s hatred of feminists has also led to her making up fake quotes she attributes to feminists in order to make it look like feminists hate men. Despite this unhinged behavior, she has a lot of status in the misogynist movement, because she provides cover for men who want to deny they hate women.

6. Lila Rose. Rose concentrates most of her energies on demonizing Planned Parenthood in hopes of cutting off state and federal funding, so that low-income women lose access to affordable contraception and reproductive healthcare services. Rose’s strategy is to do “undercover” videos, which are usually deceptively edited, to build the claim that Planned Parenthood’s services are evil and need to be terminated. While a couple of employees have, in the many years of Rose’s activism, been caught on camera doing a poor job and were subsequently fired, most of the people Rose targets on camera are only saying “shocking” things if your audience already believes women should not have access to contraception and sex education. Her latest attempt at a “sting” involves activists secretly taping themselves asking sex educators questions about sexual practices like bondage. Audiences are supposed to be horrified because the educators answer the questions honestly instead of shaming the patients. Research shows that honest, non-judgmental sex education is far better than sex-negative programs that try to discourage sexual experimentation through shaming.

7. Phyllis Schlafly. Phyllis Schlafly is the OG (original gangster) of women who hate other women, spearheading the fight against the Equal Rights Amendment and helping invent the modern conservative movement in the process. Schlafly was successful in her fight to keep a ban on sex discrimination out of the U.S. constitution, but she didn’t just rest on her laurels, continuing the fight against women’s basic human rights to this day. She was most recently spotted telling women that the way to turn boyfriends who beat them into loving partners is to marry them, even though experts advise that keeping the abuser as far from the victim as possible is the best way to keep the victim safe.

What makes some women so nasty toward other women that they would actively work to deny women equal rights, or even access to healthcare and basic safety? For some, it’s religious conviction. Some like to imagine they’re somehow special and better than all other women. Some enjoy the easy attention they get from sexist men by bashing women and others enjoy the financial perks of being the woman who is willing to speak out against feminism. But regardless of their reasons, female misogynists are putting personal gain ahead of the health and wellbeing of average women, and for that they should be held just as accountable as men who attack the equal rights of women.