Planet earth vs. roads: The epic conflict that will define the future of the world

Roads are essential to human civilization, but they disrupt vitally important ecosystems. So what do we do? 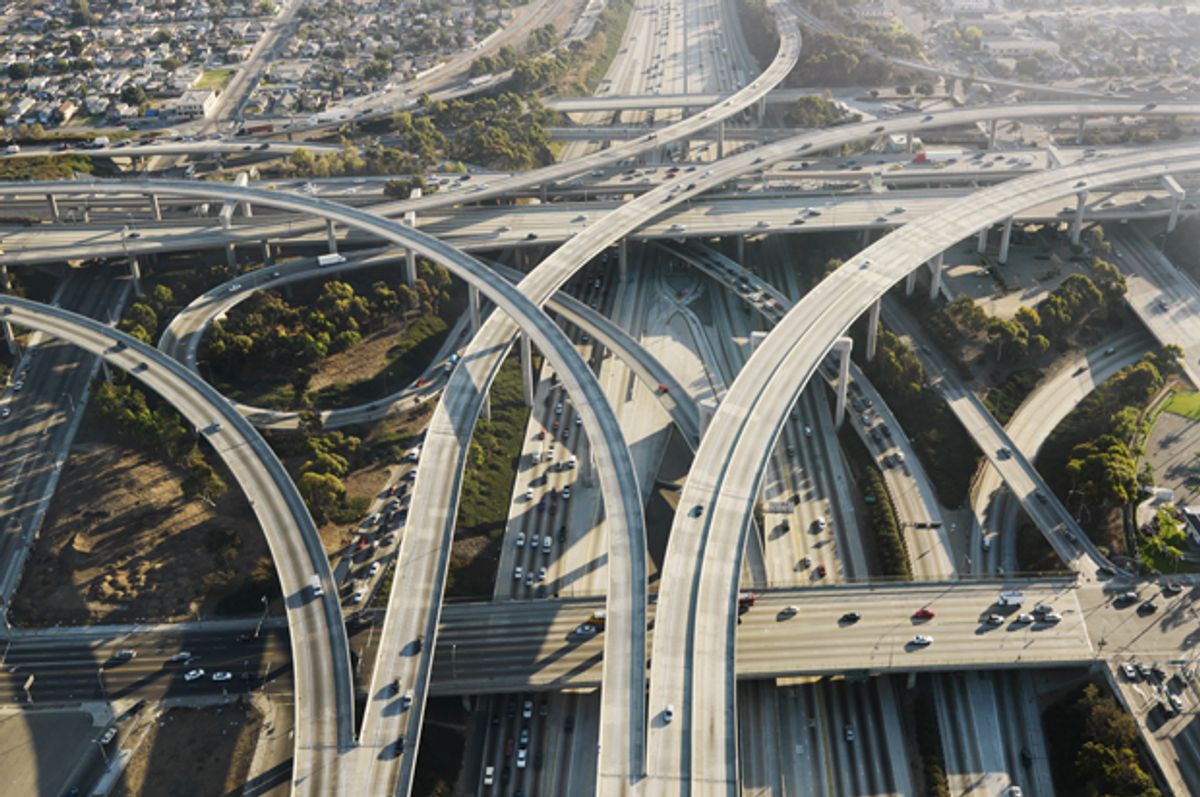 The mountain lions in the Santa Monica Mountains, to the west of Los Angeles, live in almost total isolation — though not of the kind sought by a Beverly Hills mom on a yoga retreat. Rather, these cougars, subject to a 54-year quarantine imposed by the 10-lane Ventura Freeway, suffer from genetic isolation. The population squished between U.S. 101 and the Pacific Ocean, according to a new study, shows “dangerously low levels of genetic diversity” and unusual, fratricidal social behavior.

Young mountain lions, like their human counterparts, tend to leave home in overwhelming numbers. But not here, where to researchers' knowledge, only one cat has successfully dispersed … to Griffith Park, in Los Angeles proper. The one cat that entered the area, back in 2009, single-handedly enhanced the genetic makeup of the population.

For wildlife, the freeway might as well be a vertical barrier; an interruption of the animal ecosystem on land as absolute as a dam in a river. The story of the Los Angeles mountain lions is a small example of how roads impact ecosystems long after they are built.

The best way to stop a road’s secondary effects — pollution, natural interference and, most of all, the destruction of priceless natural resources through sprawl — is, as environmentalists put it, “avoiding the first cut.” Roads beget roads.

But that is hardly a strategy. After all, the road (as much as its more celebrated partner, the wheel) is a founding element of human civilization. Without it, farming, trade, communication, the division of labor, and cities cannot exist. Roads don’t just symbolize human progress, they drive it forward.

This is obvious, but it’s not ancient history: The great age of road-building is only beginning. By 2050, we will have added 15 million miles of new road to the planet — a 60 percent increase in four decades over our current total, amassed over the past 5,000 years. Nine-tenths of that network will be built in the developing world – in the basins of the Amazon and Congo Rivers, and the jungles of South Asia and Oceania. In other words, an epic, intractable conflict between conservation and development is upon us.

A team of academics, led by the influential conservationist William Laurance, has proposed a game plan. In a paper published this August in Nature, a dozen researchers put forth what they call “a global strategy for road-building.” They have developed a world map to chart zones of road-building conflict, and, equally important, indicate which areas ought to be ceded to either nature or civilization.

“People have been thinking about the environmental impact of roads for a long time,” says Andrew Balmford, a professor of zoology at Cambridge and one of the paper’s co-authors. “What’s new here is thinking about laying it alongside economic benefits.”

First, the study maps the earth by environmental value, based on indicators of biodiversity, wilderness habitats, and climate regulation services of local ecosystems. A second map evaluates potential road benefits, based on low-yield agricultural areas, proximity to cities, and forecasts of consumer demand.

Combining these two maps produces a kind of global zoning code, splitting the planet into four sections: Conserve, Agriculture, Conflict and Low-tension. Areas of low tension, considered unimportant for either conservation or human settlement (principally the Sahara, Arabian, Gobi and Australian deserts), make up nearly a third of the Earth. Areas readily ceded to agriculture constitute another 13 percent. Conservation zones, with high natural value and low agricultural potential, account for almost half of the planet’s landmass, including large swaths of Canada and Siberia.

Sixteen percent of the globe, or about 7.7 million square miles, falls into “conflict” zones, valuable both for conservation and development. That includes 25 percent of Africa, and 16 percent of South America. Many of these areas are in and around cities, which tend to occupy ecologically valuable land and create lucrative development opportunities. Roads, in this case, are a stand-in for the clearing of the land and settlement that follow.

But that’s jumping ahead a bit: Many of the areas that the paper labels “Conserve” (like the Amazon rain forest in Brazil) are currently undergoing extensive development. The conservation of these areas is far from accomplished.

To make matters worse, national boundaries do not align with the global road map in productive ways. It’s easy enough to give Romania the environmental green light on an ambitious program of road construction. But telling Madagascar its virgin forests are too valuable to the global environment to be developed into farmland? That’s a harder sell.

Balmford insists the tradeoff need not be so stark. “The approach we’re developing might have the most effect if it helps governments put roads where such an increase in settlement would be less damaging rather than more damaging,” he says.

It’s a blueprint; a model that could be recalibrated to work on a smaller scale, where the right choice is not “good” but merely “less bad.”