Andrew Rannells: As a gay actor, I like to tell stories that are specific to my community

The "Hedwig" star on replacing Neil Patrick Harris, working with Ryan Murphy, and the new season of "Girls" 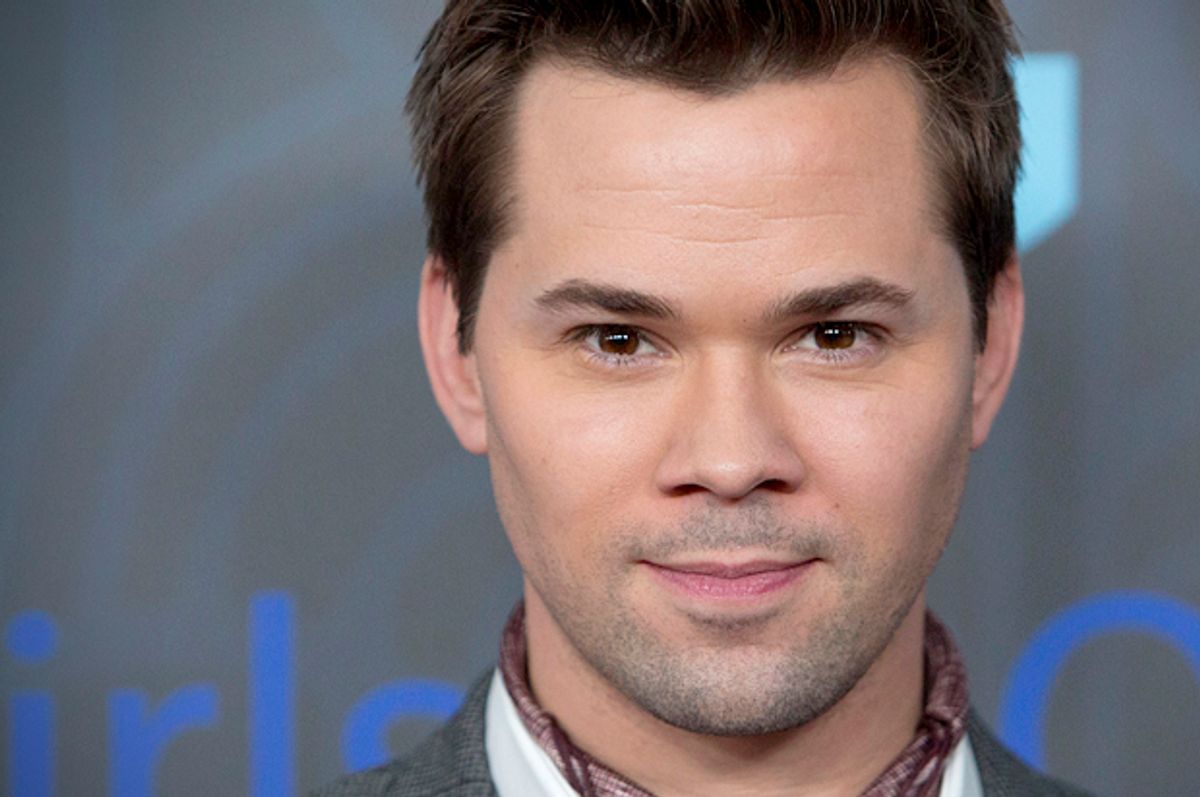 It takes a certain amount of guts to take on the role of Hedwig. The title character in John Cameron Mitchell's musical “Hedwig and the Angry Inch” requires an actor capable of not just being equal parts fearless, funny and vulnerable, he (or she) has to pretty much own the stage for the entire 100 minutes. Coming into “Hedwig” just a few months after both the show and star Neil Patrick Harris took home Tony awards, Andrew Rannells certainly had his work cut out for him. A sweet boy from Omaha Hedwig is most definitely not, so it was pretty amazing to see how fully Rannells transformed.

So the last time you were on Broadway you originated the role of Elder Price in “The Book of Mormon” for which you were nominated for a Tony. This time, you're replacing Neil Patrick Harris, who won the Tony for his performance. Can you talk a little about the difference between originating a role and coming in as a replacement?

I started my theater career as a replacement in "Hairspray," as Link Larkin. I did the same thing in "Jersey Boys." So I was familiar with the concept of someone finishes a show on Sunday and on Tuesday there's a new actor in the show ... there are certain stresses but there are certain benefits as well, because the show is sort of set and a lot of the work is done for you, so you don't have to go through all the technical aspects of it ... but obviously there's a creative freedom that's been taken away because you're shoved into this machine that is already working ... I was hesitant to replace, but then, this show, "Hedwig," is such a unique show in that it's really actor driven and that it's one actor essentially onstage ... doing this 90-minute monologue that you really get to drive and put your personal stamp on, so I was excited ... The amazing thing about this show is that it's going to be different with every actor who plays the part because it has to be.

So you've seen both the movie with John Cameron Mitchell  and Neil Patrick Harris' performance. What's your take on Hedwig? Do you think your take is different from theirs?

Yes, I guess. The [heart] of the story is very much the same and that's what I love about it. John [Cameron Mitchell] has created this beautiful story that is so universal and so accessible, to everyone really, because it's this very human story about figuring out who you are and what you want and how are you a complete person ... But he's built into the show a few moments where you get to improvise with the audience and show your own special take on who this person is, and that doesn't really exist in a lot of other shows. It's so exciting as an actor to do that every night because it's always a little bit different.

During “Sugar Daddy,” one of the numbers in the show, you go out into the audience and give someone a lap dance at one point. You also lie down on a few audience members, and I happened to be one of them! And my first thought was, oh my Gosh, he's very tall and strong and he's also very, very sweaty. Can you talk a bit about how you prepare for the role of Hedwig? It's not just how physical the role is, but also how brash and fearless and often angry Hedwig is.

It's really freeing and exciting to get to do every night, particularly those more rageful moments, because that's not something as a human in decent society that we're often allowed to do, just sort of lash out. I'm definitely a Midwesterner at heart who tries very hard to please everyone and make people feel comfortable so it's a really fun thing to get to be a bitch and get away with it ... And if I, Andrew Rannells, were onstage in my normal J.Crew getup I don't think I would be allowed to get away with that, but because Hedwig is so extreme and her appearance ... she's such a creature that she's allowed to get away with some crazy shit. [As for the physicality], it's a tough one, it's like a 90-minute mini-marathon. But, you know, for me it's the anticipation of it beginning that's the scariest part. Once it starts I love dong it and it moves so quickly. The numbers sort of fly by and then it's over.

I know you performed Hedwig before onstage in Austin in 2002. So has your take on the character changed during those 12 years?

I think the core of it is sort of the same – for me the story sort of lands in that last third when she gets into the whole Tommy Gnosis bit and how hurt she was. That, to me, is my favorite part to get to do. For me as a performer I just feel more comfortable onstage [now]. I was 23 at the time, I hadn't worked much, so the fact that I get to come back to this with a decade plus of performance and experience behind me is so amazing. And certainly not something that happens all the time that you get to revisit something you once did and the fact that I get to do it on this level is such a gift.

It was recently announced that Michael C. Hall will be replacing you as Hedwig. Do you have any advice for him?

I remember Michael when he was in “Cabaret” so I'm not going to have much to say to him in terms of advice because he knows what he's doing, obviously. The crazy thing about this show [that] there's no way to prepare for is the audience. I rehearsed as much as I could, and I felt as prepared as I could be, and the second you hit the stage in front of 1,100 people there's no way to prepare for that except to do it. In this show, in particular, the audience is such a huge X factor in how things are received. More so than other shows I've done before.

Back in January you and I were part of a Google hangout about the portrayal of LGBTI people in the media and you said that while you've been given the opportunity to play gay characters by straight people, you'd appreciate more opportunities to play gay characters written by gay people. And now, you have. Can you talk a bit more about why this issue is important to you?

I feel so fortunate to have gotten to work with Ryan Murphy who as a gay man really creates stories that speak to him but also end up being wildly universal ... his stories are very human and accessible ... and Ryan essentially told his story of going through the surrogate process and having a baby (on “The New Normal”) and I'm so proud that I got to be a part of that. And "Hedwig" is another great example -- John Cameron Mitchell creating this story that on paper seems so crazy and bizarre but is [really] so simple and beautiful ... I do feel as a gay actor that it's nice to tell stories that are specific to my community or my experience on earth, and a lot of times that will come from other gay people because that's the most authentic way to go about it.

Are there any types of roles that you wish you were offered but haven't been yet?

I feel really lucky. The past couple years I've gotten to do such different parts. It's been very fulfilling. I'm not dying to be an action hero or anything.

Speaking of those other parts, can you talk to us a bit about Season 4 of “Girls”? From what I've read it looks like Elijah has moved from being a recurring character to a main character.

That is correct ... Although I have to say that even though I was only recurring status before, Lena and everyone have always made me feel so incredibly included ... This is my first official season as a full cast member, so that was very exciting.

I'm happy to say that as far as Elijah is concerned he's still as flailing and directionless as ever...I get to go to some good parties with Hannah. Elijah and Hannah really get to tear it up...people say they love to see Hannah and Elijah drunk and high...and we get to do more of that next season.

You're also in Nancy Meyer's upcoming film, “The Intern.” Can you talk a bit about the film and your experience making it?

That was so incredible and came out of nowhere. I had auditioned for it a couple times and really thought it was such a crazy long shot and then I got it! I know Anne Hathaway ... but we never worked together so that was exciting. Obviously the chance to get to work with Robert De Niro is pretty nuts. To look across and be like, "Oh, I am doing a scene with Robert De Niro right now," was pretty crazy. And Nancy couldn't be more amazing ... she's such a prime example of people who write and direct and produce their own material. She's created such a specific world and brand so it's so inspiring to get to work with her. She really knows what she wants and knows how to articulate it.

Eric Sasson writes “Ctrl-Alt,” Speakeasy’s column on alternative culture. He is the author of "Margins of Tolerance." You can follow him on Twitter @idazlei or visit his website here.