Back off our beauty queens! 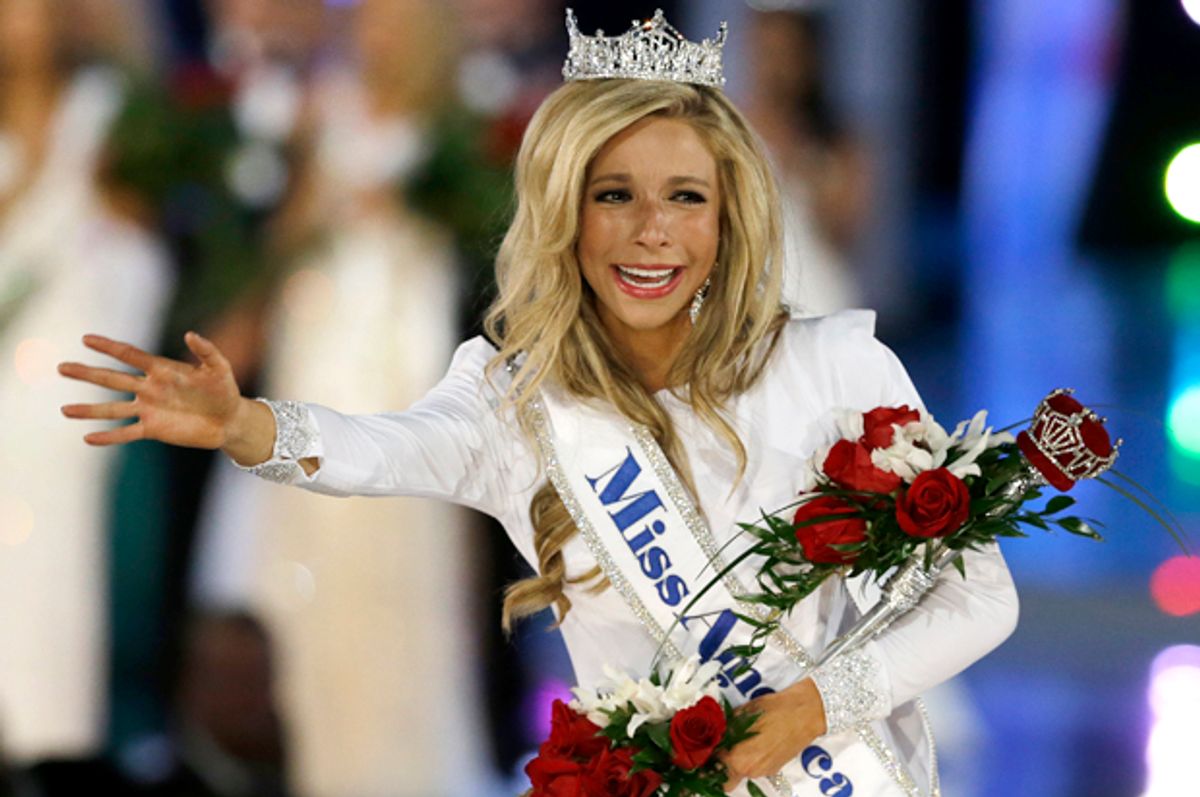 The Miss America pageant is a bizarre relic of another era, a time in which parading women around in high heels and bathing suits for inspection wasn't even questioned as a legitimate form of entertainment. It's dated and it perpetuates the sexist stereotype of valuing young women – literally crowning them as royalty – for their physical attributes, for their carefully cultivated veneers of toothy smiles and stiff hair. Yet it endures, in many ways more powerfully than ever. That's in no small part because it's successfully transitioned from something people gather to watch to something people gather to hate watch. And frankly, our queens deserve better.

Sunday's competition, which culminated in the coronation of Kira Kazantsev – a young woman who distinguished herself for her ability to bang on red plastic cups and her love of an author the pageant knows as "Jane Austin" -- was a typically awkward affair. Miss Nebraska caused a stir with a brief wardrobe malfunction. A nation shuddered collectively at Miss Ohio's ventriloquism act. We learned which contestants are afraid of frogs, and which have been attacked by cheetahs. If you were looking for a barrel to shoot into on social media Sunday, you would have been hard-pressed for an easier target.

Just a few years ago, pageants seemed on their way out. In 2010, EW wrote an elegy for the form, noting declining ratings and that "The pageant’s days of dominating water cooler conversations are long gone." But just a year later, it had surged back in the ratings. And ever since, it has provided plenty of water cooler moments, including last year's tattooed, rootin' tootin' gun-loving contestant. Social media has made Miss America, if far from hip, appointment television again. It's a self-conscious cornucopia of tweetable moments, an opportunity for people sitting in front of screens in their houses to share their mockery of pretty young women whose listed interests include dining at Waffle House. If ever there were a collective American Nelson Muntz moment, the Miss America pageant has become it.

It's easy to point and laugh at the contrivance of beauty pageants, with their pretty, perky contestants and their corny conventions. It's been seven years, and the phrase "Miss South Carolina" is still synonymous with a dumb answer of epic proportions. Last year, my colleague Laura Bennett noted that "pageant shaming has become a part of our viral culture," and in June, no less an authority than Germaine Greer stooped to pillory a British beauty contestant for being "conventionally good looking in the Barbie doll" manner.

Yet I'd like to point out that this year's winner, whose Solo cup skills are probably not making Anna Kendrick quiver in her boots, has used her platform to speak out about sexual abuse in the military, a topic generally not tackled in a context of sash-wearing and bouquet brandishing. She's been open about her own experience of domestic abuse, saying, "You just feel alone. You feel helpless. You don't feel like anyone could possibly understand." She doesn't have to do that. Miss Idaho, Sierra Sandison, proudly sports her insulin pump. Last year's winner, Nina Davuluri, became a lightning rod for a conversation about bigotry and beauty, and responded with class and grace. You can be lazy and laugh all you want, but these women are pretty cool. They're getting stuff done in the world, and I'd take their achievements over those of some rando Twitter troll any day. I don't entirely get the whole pageant thing either, but I don't get the elitist satisfaction that comes from group hatred even more. And sure, competitively twirling around in evening gowns is a little ridiculous, but in the end, so is sitting on your butt making fun of women on the Internet.