GOP's new partisan hit man: You may not know Kris Kobach -- but you should

He might be an obscure state official, but here's how Kris Kobach may control who runs the Senate -- and a lot more 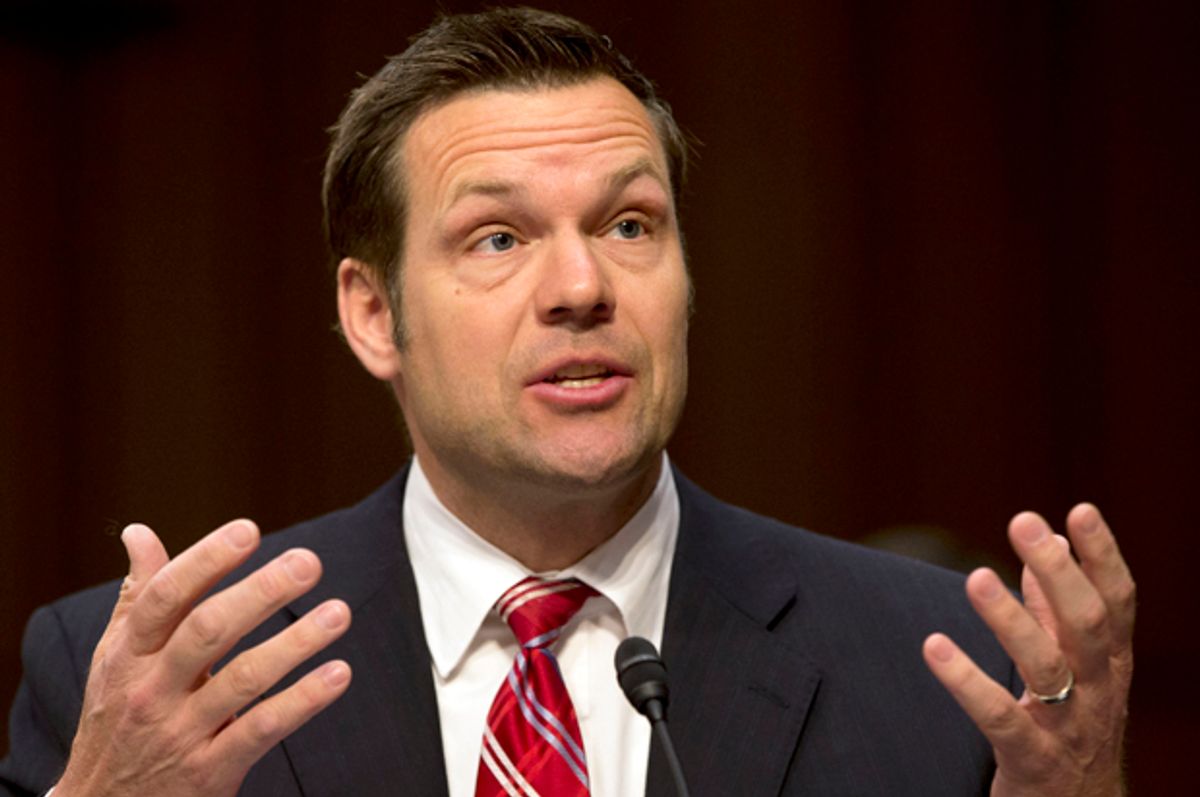 Following up on my post on Friday about the long illustrious history of conservative vote suppression it's interesting that one of the nation's foremost activists in the field should be in the spotlight going into the November election. Indeed, he's right in the middle of one of the most interesting races in the country.

I'm referring to Kris Kobach, the Republican Kansas secretary of state who was sued last week by the former Democratic candidate for the Senate who dropped out of the race in favor of an independent. If you haven't heard about this wild turn of events, in a nutshell, the Kansas GOP is imploding under the disastrous leadership of the ultra-conservative Gov. Sam Brownback. It's so bad that GOP leaders in the state are defecting from the party and it looks as though a former Democrat-turned-independent may just unseat long-term Republican incumbent Pat Roberts. Seeing the opening for an upset, the Democrats in the state persuaded their candidate to drop out and he agreed to do it. He followed all the rules for withdrawal, but Kobach's office says no dice: You're staying on the ballot whether you want to run or not.

According to Chad Taylor, the former Democratic nominee, he spoke with Brad Bryant, the secretary of state's deputy, and he was told that his letter indicating his intent to withdraw contained all the information the law required. Bryant said in an an affidavit that this was a misunderstanding:

I am aware of the allegations made by Mr. Taylor ... that Mr. Taylor asked me, prior to having the letter notarized, if the letter "contained all the necessary information." While I recall Mr. Taylor asking me a question of that nature later in our encounter, as described below, I do not recall him specifically asking me this question at this time and, in any event, I did not affirm to Mr. Taylor, at this or any other point during this encounter or otherwise, that his letter contained all of the necessary information to effectuate his withdrawal from the election.

That's very convincing. He also said that he might have "shrugg(ed) my shoulders as to indicate 'we'll see'" and seemed to imply that Taylor was making this up as a way to stay on the ballot without angering the "national Democrats" who Bryant claims forced him to withdraw from the race against his will.

According to election law experts, it's unlikely that any of the affidavits will have any effect on the Kansas Supreme Court's decision on this case. It's entirely possible that Chad Taylor will be forced to stay on the ballot and campaign for people not to vote for him.

Yes, this is a U.S. Senate race we're talking about.

The fact that this particular secretary of state is involved in such a controversy is unsurprising. Kris Kobach is one of the most virulent anti-immigrant activists in the land, with a special emphasis on phony accusations of voter fraud. He served in John Ashcroft's Department of Justice in the Bush administration as his special adviser on immigration and was instrumental in the implementation of the National Security Entry-Exit Registration System, the post 9/11 requirement that all Muslims and Middle Eastern citizens in the country on visas register and file their fingerprints with the government.

But he's best known as the godfather of laws such as Arizona's notorious SB 1070, the law that required local police officers to arrest undocumented workers for violation of immigration laws. Kobach originally proposed such a law on a national basis as a member of the Justice Department, but it was so controversial that it never became official policy.  Years later, as an activist anti-immigration lawyer, when Kobach was tasked with drafting the Arizona law with Sen. Russell Pearce, he cited his own defunct DOJ opinion as legal justification.

In 2007, Kobach become head of the Kansas state GOP and in a portent of things to come, he instituted a "loyalty" committee that ended up depriving several GOP officers of their voting rights. Why? Because they had once donated money to Democrats. When it comes to vote suppression, he takes no prisoners. So it was probably inevitable that when Kobach would once more run for office he would win the secretary of state job in the Tea Party wave of 2010 on a "voter fraud" platform. He convinced Kansans that they were about to be overrun with hordes of undocumented workers who would illegally vote -- for Democrats, naturally.

It is somewhat ironic that one of the people most alarmed by Kobach's loyalty test was none other than the senior senator from Kansas, Pat Roberts, the man Kris Kobach's office is pulling out all the stops to get reelected by hook or by crook. So far he has not complained that the secretary of state is tinkering with the electoral machinery for his benefit. And no one else should be surprised. Kris Kobach has spent over a decade preaching the spurious gospel of "voter fraud," advising Republicans all over the country about ways to make it difficult for Democrats to vote. It's not as if he's a stickler for democracy. However, it would seem that Kansas Republicans might be getting a little tired of this radical brand of politics and it will be very interesting to see if Kobach himself survives the purge. At least one poll shows his Democratic challenger ahead. Of course, any Democrat will have to have a huge lead in order to overcome the repressive voter registration laws Kobach has managed to get passed. But you never know; maybe the voters are finally figuring out that Kris Kobach is what's the matter with Kansas.