"She just needs to be quiet" 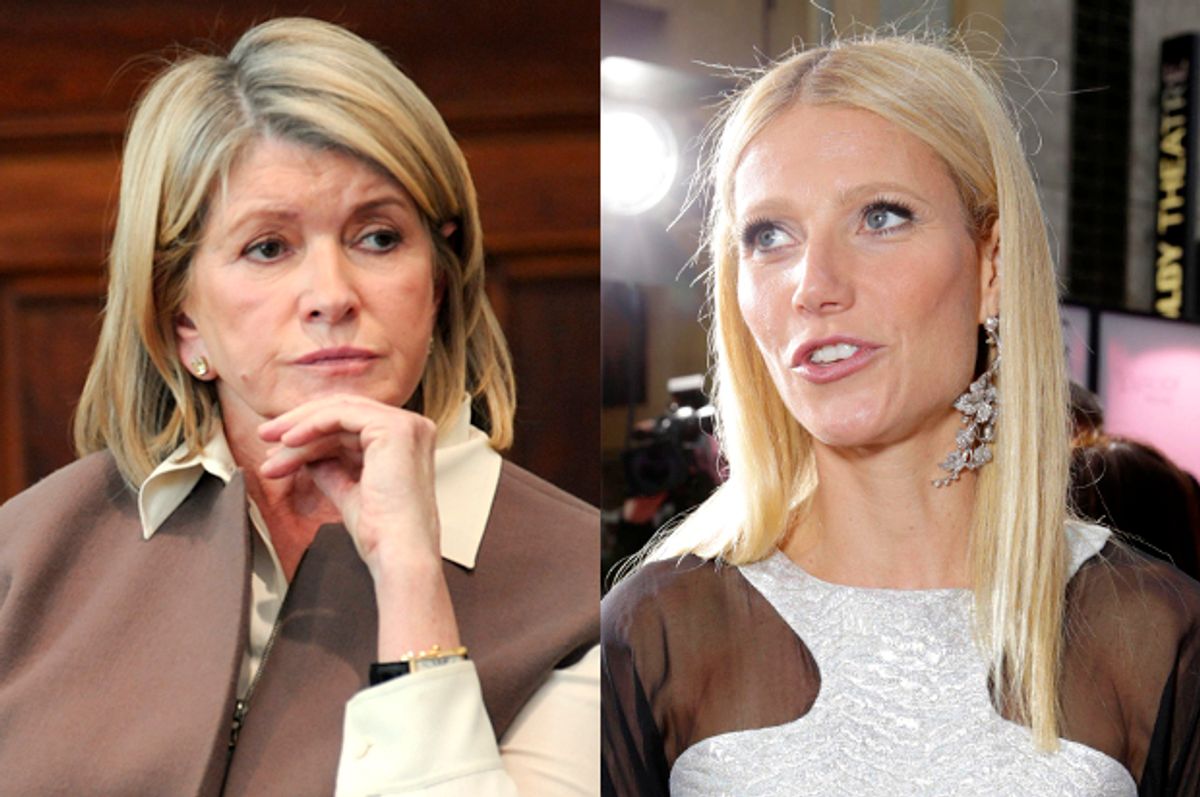 Maybe the lifestyle guru's recent comments regarding the pretender to her elegantly distressed throne were a little on the "Oh snap!" scale, but to be fair, when Martha Stewart issues a dis, she does it like she does everything else: impeccably. Page Six reports that speaking to Net-a-Porter magazine, Stewart sounded off recently on the goddess of Goop, speaking for the planet when observing of Paltrow, "She just needs to be quiet." She also reportedly added, "She’s a movie star. If she were confident in her acting, she wouldn’t be trying to be Martha Stewart." And I for one think it's nice someone out there still thinks Gwyneth Paltrow is a movie star. Stewart is also apparently underwhelmed by the newest contender in the lifestyle brand wars, Blake Lively. Her senior vice president, Kevin Sharkey says, "I don’t get the sense she’s credible. She’s enthusiastic, but she’s not credible." Lively's Preserve launched earlier this year, and features musings like "As the earth orbits the sun and spins on its tilted axis, waning in and out of its luminous exposure, we too adapt to the ebb and flow. This recurrent shift affects our day-to-day—the food we crave, the desires we entertain, the clothes we don—and more often our sense and susceptibility." Hahahhahaha. In other words, you can see why Team Martha is probably not crying in its malt liquor with anxiety about the competition.

Of course, the press, which hasn't used the phrase "side eye" since Taylor Swift and Katy Perry made a few passive aggressive comments last week, lapped up the quotes like they were tall glasses of lemonade with a fresh ginger syrup. While E! and HuffPo declared Martha "slammed" Gwyneth and Elle went with the "shade" description, Vanity Fair went so far as to say Stewart had "gone to war" with Paltrow, because apparently Vanity Fair doesn't know what war actually is.  So here's a reminder. It is entirely possible for a woman to have an opinion, even a negative one, about the work of another woman without it being a declaration of war. Oh, and also – Martha's right.

I wouldn't go so far as to speculate about Paltrow's acting career or what endeavors she prefers to give her attention to and why – even if her  line earlier this year about how "much harder for me" it is to be a working mother than someone who toils in an office did seem like a big pile of BS. But Paltrow's now done two cookbooks and been steering Goop for six years, and it is plain she is no Martha – or Ree Drummond or Rachel Ashwell or any other iconic lifestyle entrepreneur. She's a pretty blonde whose site hasn't posted a recipe in over two months.

On the other hand, Martha's fussiness, her zeal for perfection, are legendary. Just this weekend, I was at a dinner party in which her method for folding a fitted sheet was discussed with such reverent enthusiasm that the host excused herself to produce a fitted sheet and demonstrate it for the assembly. (I may not go to the wildest dinner parties.) But Martha, who on Monday announced on Twitter that "Kitchen week is here!" as if Kitchen Week is an actual thing, owns her fussiness. She finds it almost as hilarious as we do. When she did a Reddit Ask Me Anything this spring, she asked, "Where's Snoop? I have brownies FOR YOU!" and admitted she loves it when people say, "I'm the Des Moines Martha Stewart." Trust me, no one is the Des Moines Gwyneth Paltrow. Nobody wants to be.

If you aspire to be a lifestyle leader, you can't just observe that the seasons are changing or that there's a "modern" way to make a bed. You've got to give your audience that sense that you have a life, a real one that may be sometimes be silly and perhaps occasionally involve a little prison time. Martha has grown rich on the idea of her favorite, oft-used word, "perfect," but her acolytes enjoy her because she has a sense of humor about that impossible to attain ideal and her own quest for it. And if she thinks Gwyneth should pipe down and not even try, that's not Martha throwing shade. That's Martha being, as usual, right.