My ugly inner battle: How jealousy poisoned my friendship with John Green

I know I'm not the first writer to be wracked by envy. But still the "Fault in Our Stars" author's career haunts me 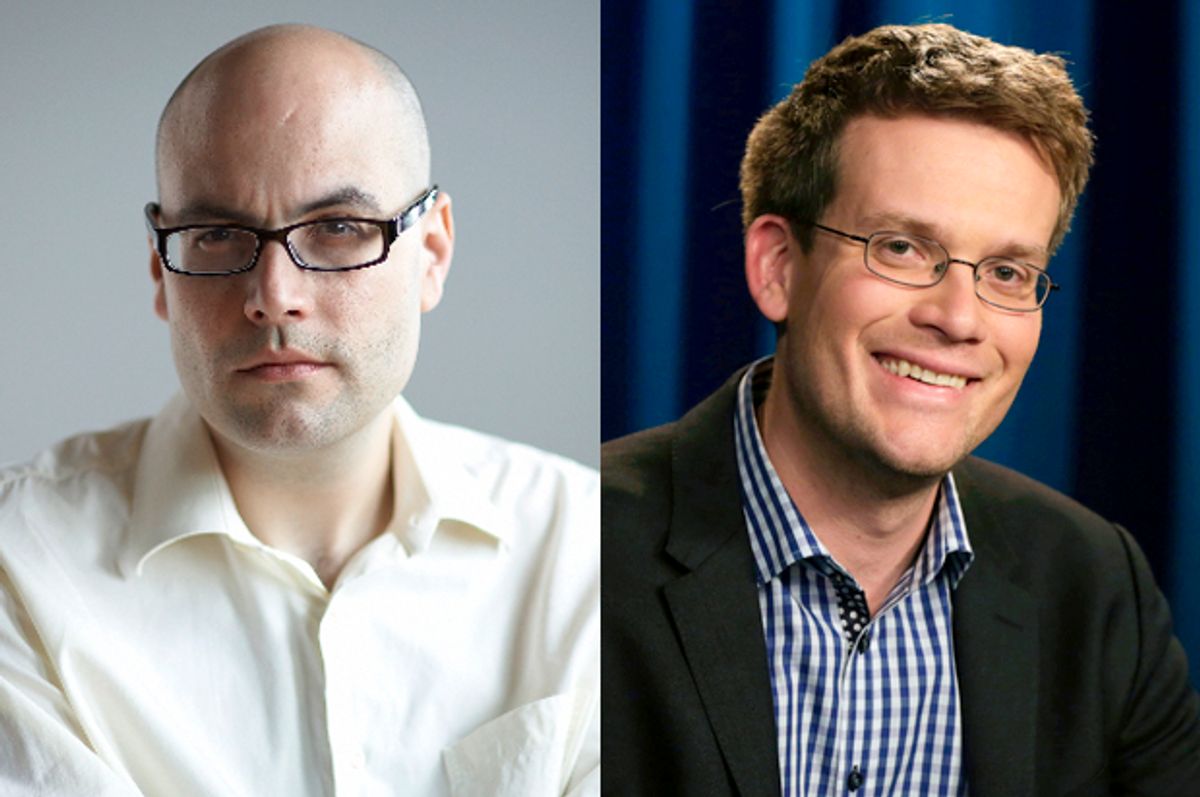 Over the course of my career writing about popular culture, most notably at the A.V. Club, where I was head writer for most of my 16 years there, I’ve oscillated wildly between the following two sentiments:

I know these extremes are familiar to many writers. But I still felt the high and lows intensely. It took me 17 years of writing professionally, four books, a whole lot of therapy and antidepressants, and a series of nervous breakdowns before I could reach a place where I felt like I was a pretty good writer who deserved most of the success I had achieved.

I was just starting to embrace the modest nature of my literary success when John Green happened. Of course, John Green didn’t happen all at once: John Green was a slow-building grass-roots movement that built and built and built before it exploded. It feels weird writing about John Green as a pop culture phenomenon -- one whose best-selling book became a hit movie that will be released on DVD tomorrow -- because for a long time, he was just my friend. He was just the unusually likable, sweet-natured guy who always seemed to read the same essay about getting a colonoscopy or prostate exam from a beautiful Indian woman at Funny Ha-Ha -- a reading series my friend Claire Zulkey runs at Chicago’s Hideout Bar, which began in 2004 and will soon be celebrating its 10th anniversary.

What I remember most about John from the days when we both read regularly at Funny Ha-Ha was his laugh. He had the most wonderful laugh, the kind of booming, unapologetic guffaw that stands out in a crowd. When you’re reading a humorous piece, laughter is what you feed on. It isn’t just nice, it’s essential, as life-giving as oxygen, even, and when I was reading at Funny Ha-Ha I took enormous comfort in knowing that John would be there near the front of the stage, laughing that big, glorious laugh whether my piece merited it or not.

I have been deeply nostalgic for those early days of Funny Ha Ha as of late. It wasn’t just a reading series: It was a community of writers who were all young and hardworking and talented and bright and full of energy and ambition. We were all going places, and it was apparent that John in particular was headed for big things. But I don’t suspect anyone could have envisioned just how far he would go, including John himself.

Even in his 20s, John had that wonderful quality of making insecure and painfully self-conscious people like myself feel not only comfortable in their own skin but also brilliant and clever and special. He had a genius for putting people at ease, for making you feel important, like you were doing something very right. He had a magnetism about him, an inner light. When John Green was laughing at something you wrote, it seemed like everything was OK in the world.

And after moving to Indiana, John Green’s career began to explode in ways I barely understood. He became a superstar of YouTube, making homemade videos with his brother that captured the world’s imagination. He became a star of Twitter and Instagram. His books began getting optioned for movies, most notably “The Fault in Our Stars.” Around the same time, I started publishing books myself, first a memoir (2009’s “The Big Rewind”), then a book of comic essays about failed films (2010’s “My Year of Flops”), then a coffee-table book with Weird Al (2012’s “Weird Al: The Book”) and finally 2013’s “You Don’t Know Me But You Don’t Like Me,” a Gonzo exploration of musical subcultures focusing on Insane Clown Posse and Phish.

While Green’s career skyrocketed, I struggled. I was thrown into a deep depression by the news that, despite a huge amount of press and attention, my debut memoir had only sold about 5,000 copies. For a long while, I imagined my fondness for John would protect me from the ugly poison of jealousy, and that’s what jealousy is: an ugly poison. I told myself that if it had happened to anyone else, someone less worthy or likable or kind, I might be jealous, but not when it happened to John. How could I be deeply envious of someone I had only positive feelings toward, someone who deserved that astonishing level of success as much as anyone possibly can? Even now, I see my envy as a warped form of respect, as a toxic form of flattery.

I did not want to concede my intense jealousy because I did not like the feelings it brought out in me. I did not like the way it made me feel resentful, petty, insignificant and small. I hated the way it made me feel grubby and desperate, opportunistic and scheming. My spirit, if you will, was gracious and happy for John, but my ego, the infernal ego, cried out, “Why not me? Haven’t I paid my dues? Haven’t I written lots of books? Why can’t I be even a fraction that successful? And why doesn’t he use his enormous power and visibility to help me, despite the terrible job I did keeping in touch?”

Of course I know damn well why not me. John wrote a timeless story of tragic romance that connected on a deep and powerful level with a mass audience. I wrote a book where I traversed the country in Greyhound buses and took drugs with Juggalos. There’s a reason one of those books blew up and became a best-seller and hit movie while the other is a cult book still in search of a cult.

I realize I'm far from the first writer to feel this way; there's a whole literature of envy. The New York Times Book Review's Bookends column recently asked its columnists point-blank whose writing career they most covet. But there's something about coming of age professionally with someone, sharing their early striving, that emboldens you to compare yourself to them eternally. And there's something, too, about the particular shape of Green's ascent -- his YouTube stardom and his YA empire -- that felt to me like he'd cracked some code to the zeitgeist while I struggled on the fringes.

This is the sick thing about success in the literary world, amplified in an age in which social media is a rabbit hole of unhealthy self-comparison: John Green did not inspire a tidal wave of ugly emotions among his fellow writers by doing anything wrong. On the contrary, he pissed other writers off by doing something very right, by writing a great book and then being the best possible ambassador for it. I cannot even imagine what it’s like to have to deal with the mental energy of tens of thousands of would-be peers all desperately wondering, “Why not me?” about your book sales, movie, online following and general cult of personality.

This Friday, Green will be returning to the Hideout in triumph to read as part of the 10th anniversary of Funny Ha-Ha, which will reunite the original lineup for its very first show. The lineup will include myself, humorist Mark Bazer, best-selling author Kevin Guilfoile, author Amy Krouse Rosenthal, Claire, her talented filmmaker husband, Steve Delahoyde, and last, but not least, John Green. Ah, but maybe he isn’t even last after all, because there will be another presence at that 10th anniversary as well: John Green’s fame, power and success, which will surely tower over us all.

I am both excited about the evening and anxious about it in a way I would not be if Green hadn’t rocketed so far out of my stratosphere and into the realm of giants, into the lands of the Stephen Kings and Nicholas Sparks. What do you say to a casual friend who has become one of the most successful writers in the world, a writer so successful Maya Angelou had to die in order to slip ahead of him in the Amazon rankings for even a single day? What do you say to a guy whose movie wipes the floor, box-office-wise, with a $200 million Tom Cruise science-fiction extravaganza? Do you say, “Hey, how did that book with the girl with cancer do?” or, “Hey, I heard they were making a movie about the book about the girl with cancer. Did that ever happen? If so, how’d it do, did it get released theatrically?” Or do you go the honest route and confess: “You have absolutely no idea how nakedly I envy your incredible success and wish I possessed even a sliver of it, while still knowing how profoundly you deserve it?”

Nathan Rabin is a staff writer for the Dissolve, and the author of four books, most recently "You Don’t Know Me but You Don’t Like Me."