Miss America, Janay Rice and our long history of conflating glamour and violence

From "Hunger Games" makeup to an "ANTM" corpse photo shoot, violent narratives have never been made to seem sexier 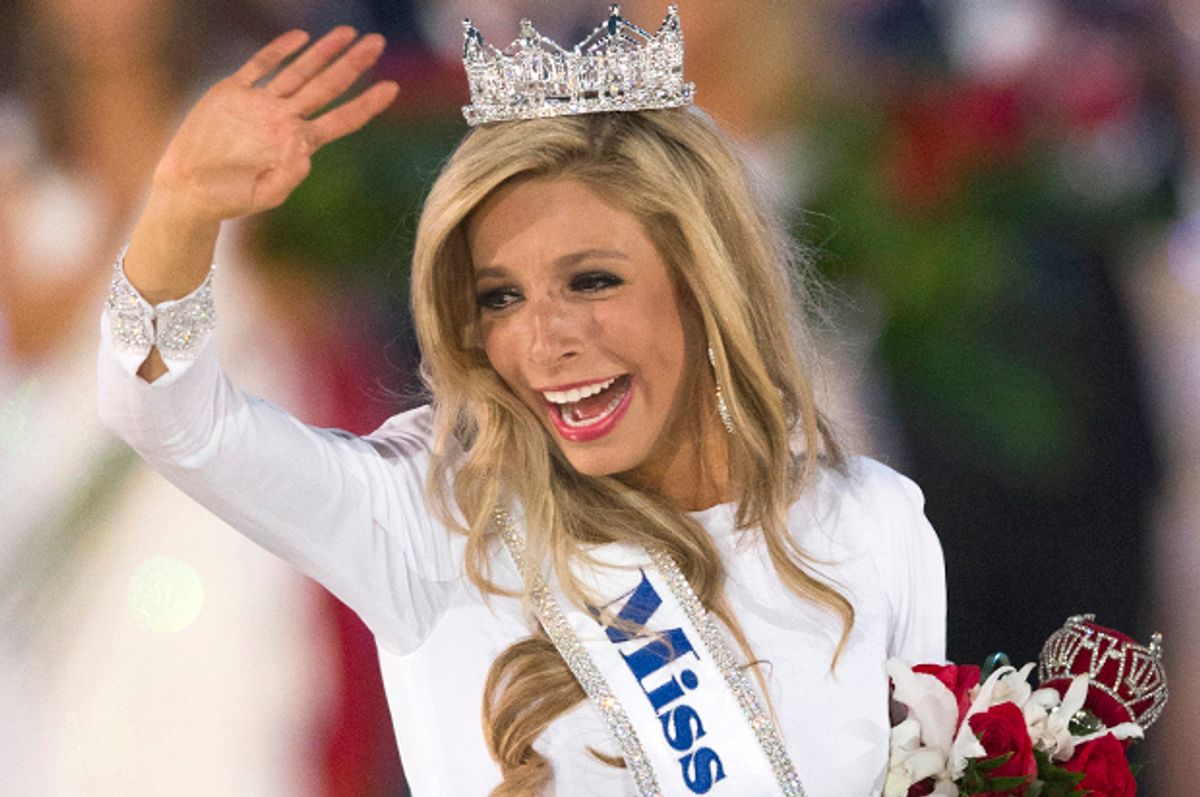 Kira Kazantsev, our freshly crowned Miss America, happens to be a domestic-violence survivor. Her public-service platform involves working with a DV advocacy group called Safe Horizon. Kazantsev wasn’t the only contestant at Sunday night’s pageant to speak out on the issue of domestic violence; two others made it the subject of their platforms. Less helpfully, pageant judge Kathy Ireland phrased a question about domestic violence to Miss Florida this way: “As a woman, what do you think of [Janay Rice’s] decision?”

That same Sunday, ESPN’s Hannah Storm spoke out against both Rice and the NFL’s ass-covering on his behalf, emphasizing that the story has brought up “impossible” questions from her football-loving daughter and wondering “What, exactly, does the NFL stand for?”

Many viewers applauded Storm for speaking out, calling her words “passionate” and “emotional.” But at least as many evinced a chilling and deeply cynical take on Storm’s emotional monologue, the Miss America pageant's treatment of the issue, and the Rice story itself. Comments included: “Why did she marry him after he did this to her? Is it some kind of poor-me, trapped victim mentality … or was it his salary?”

It's a sad coincidence that Saturday, Sept. 13, marked the 20th anniversary of the Violence Against Women Act, the first piece of federal legislation drafted to specifically address sexual assault, domestic violence and rape as crimes. First introduced by then–Delaware Sen. Joe Biden and passed in 1994, it marked a significant change in how — at least in theory — America thought about domestic violence in particular. Rather than a private family matter best left up to the individuals involved, VAWA recast it as a systemic issue that deserved not only federal funding and resources, but a new public understanding. At the time the act was introduced, Biden recalled this weekend, the prevailing attitude of its critics was that official legislation on domestic violence would undermine that perpetual fave of patriots, the sanctity of the American family.

But recent events suggest that in the 20 years since VAWA, public understanding of domestic violence hasn’t evolved as much as we might hope. The official line on domestic violence may be one of zero tolerance, but the comment basements below NPR headlines tell a different story — one where the NFL has no business meddling in the “personal business” of players, and Janay Rice married the man who beat her up because his fame and wealth made it all, apparently, worth it. At the cultural intersections of money, fame and gender roles, we’re still working from conflicted scripts. And looking beyond Rice to the larger popular culture, it’s clear that one of those scripts involves the conflation of violence against women with beliefs about visibility, fame and glamour.

Let’s take the men, fictional and otherwise, who embody some of American popular culture’s most indelible images of masculinity: Tony Manero and Michael Corleone, Gordon Gekko and Don Draper, John Lennon and James Brown, Evel Knievel and Floyd Mayweather Jr. In their stories, power has always,  to some degree, involved the mistreatment of women, whether it’s emotional manipulation like lying, cheating or gaslighting, or out-and-out physical violence. As viewers, our sympathies are engineered to be with  these figures, and thus it’s generally their female companions who are the receiving end of distrust and even hatred: Witness, in just the past few years, the vitriol aimed at "Breaking Bad’s" Skyler White or "Mad Men’s" Megan Draper. In such a context, the anger at Janay Rice for daring to appear in public as a victim makes a sick kind of sense: She wanted the power and the glamour of aligning herself with his fame, so how dare she complain now? (The fact that the couple met pre-fame, when they were still in high school, is an inconvenient fact that tends to go unmentioned in this and other stories of famous men and their abused partners.)

The idea that violence is something that women tacitly sign up for when dating or marrying a professional athlete, particularly one in an inherently aggressive sport, is a central tenet of victim-blaming. TMZ’s release of the full Rice video came roughly a month after tattoo model and former porn star Christy Mack was beaten nearly to death by her ex-boyfriend, a professional MMA fighter with the kicky moniker War Machine. As with Janay Rice, victim-blaming came fast and unyielding when Mack tweeted photos of her bruised, swollen face. Aside from taseteless-but-predictable facial jokes, there were fauxlisophical musings about how anyone who hooks up with a professional ass-kicker will probably get their ass kicked sooner or later.

But it’s the associated glamour and material comfort of such relationships that seems to really whet the ire of onlookers. If the collective id that flowers in tweets and online comments tells us anything, it’s that there’s a particular dearth of concern for (and sick satisfaction gained from) women who are presumed to have either married for status or come by it honestly in the course of a relationship. It’s why the Real Housewives franchise is framed as schadenfreudelicious must-see TV. It’s why Anna Nicole Smith’s story, start to finish, was made out to be as slapstick as it was tragic. It’s why, back in 2003, Kobe Bryant’s gift to his then-wife Vanessa of a $4 million purple diamond made the term “apology ring” happen. By the reasoning of an alarming number of people, mistreatment and even violence are simply the price these women have tacitly agreed to pay for reflected glory and material comfort. The fact that, as far as we know, none of them agreed to any such thing is beside the point.

But it’s not just online denizens and celebrity rubberneckers who have conflated glamour and violence in the cultural imagination; this has run deep for decades. In connecting the dots between money, power and abuse of women, it’s crucial to look at one place where an unequivocal vision of violence against women has flourished for a decade or more: high-fashion advertising and editorial that portrays beautiful, desirable women as abused ornaments and corpses.

The dead-model fashion ad is often greeted, when a particularly egregious one hits the Internet, as a horrific new trend. But in fact it’s been a staple of the genre for decades, defended as “edgy” even as it’s settled into cliché. Marc Jacobs’ recent campaign featuring Miley Cyrus sitting moodily next to a bloodied female fashion casualty recalls Jimmy Choo’s 2006 offering, in which Quincy Jones leans, shovel in hand, against an open car trunk containing a dead blonde. Cesare Paciotti’s 2005 ad where a woman is splayed backward against a couch as if she’s been strangled perhaps inspired the 2008 ad for men’s suit-maker Duncan Quinn, in which a bra-and-panty-clad woman is indeed strangled by a man who looks directly into the camera. Was the woman so desirable and glamorously shod that she provoked a crime of passion, or was she simply a sexualized thrill kill? Who cares — she died young and left a sexy-ass corpse whose attire (what’s left of it, anyway) can be purchased at Saks Fifth Avenue or Bloomingdale’s.

It’s not an accident that these shots aren’t used to advertise, say, low-fat yogurt or Spanx. The female-death fashion moment is one that’s located firmly in the rarefied realm of $850 spike heels and $100-an-ounce perfume. And yet the idea, often used to defend such ads and editorial, that high fashion must be able to push the proverbial envelope falls flat when you consider that "America’s Next Top Model," a show whose target audience is tween and teen girls, used the dead-model gambit as the basis for a challenge in 2006. If brands were honest, they’d say what their ads already do: The confluence of sex, glamour and violence works in advertising because it’s already been subtextually accepted in the larger culture.

And this acceptance starts young in consumers of pop culture, shaping their beliefs about how relationships, sex and love are created and, in a capitalist culture, transacted. Jennifer Pozner, a media critic who does numerous media-literacy workshops and presentations that center on advertising, reality TV and celebrity culture, has written and talked at length about the impact of what she calls the “beautiful-corpse” episode of "ANTM" as well as the long-running show’s other disturbing messages.

“['America’s Next Top Model'] has glamorized a whole range of violence against women,” Pozner notes. “There was one episode where the girls were dressed as the seven deadly sins and posed in coffins in open graves. And there was a season where Tyra [Banks, the show’s host and mentor] told the girls that the best modeling tip was to ‘pose with pain.’ She gave a variety of different scenarios, like ‘You’re on a date with a guy and he chokes you.’ That’s an incredibly specific but also subconscious message about what girls should allow in their lives.”

When you start looking at the larger culture, the subtextual equation of beauty/desirability and violence comes into stark focus. Cover Girl’s "Hunger Games" makeup collection. The romantic comedies that update "Taming of the Shrew"-like story lines to showcase an uppity career gal who only finds love when she’s faced with a smarmy misogynist played by Gerard Butler. The glamorous dames of comic-book lore who’ve met untimely ends in refrigerators and beyond. Pop icons paid handsomely to perform for the dictators of countries known for unspeakable violations of human rights. These are all connected, pieces of a puzzle in which violence of varying appearances and degrees is acceptable in the service of a glittering, prosperous whole.

None of this undermines the success of the Violence Against Women Act, of course; as New York Rep. Louise Slaughter, one of its authors, recalled this week, VAWA can be credited with a significant drop in reported incidents of domestic violence and an increase in much-needed resources for individuals and families. But the act was never meant to address popular culture or media. We’ve long believed that there was no need for it to; after all, movies and TV and sports and comics are just entertainment, right? And yet, recent events have shown us quite indelibly that discussions and beliefs about acts of violence increasingly reflect what popular culture teaches us. Changing policy is a start, but changing how we think about the seductiveness of violent narratives — and the impact they can have on real life — would be a smart next step.