Fox has a new way to scare its old white audience: Not just drug mules but terrorists are coming up from Mexico 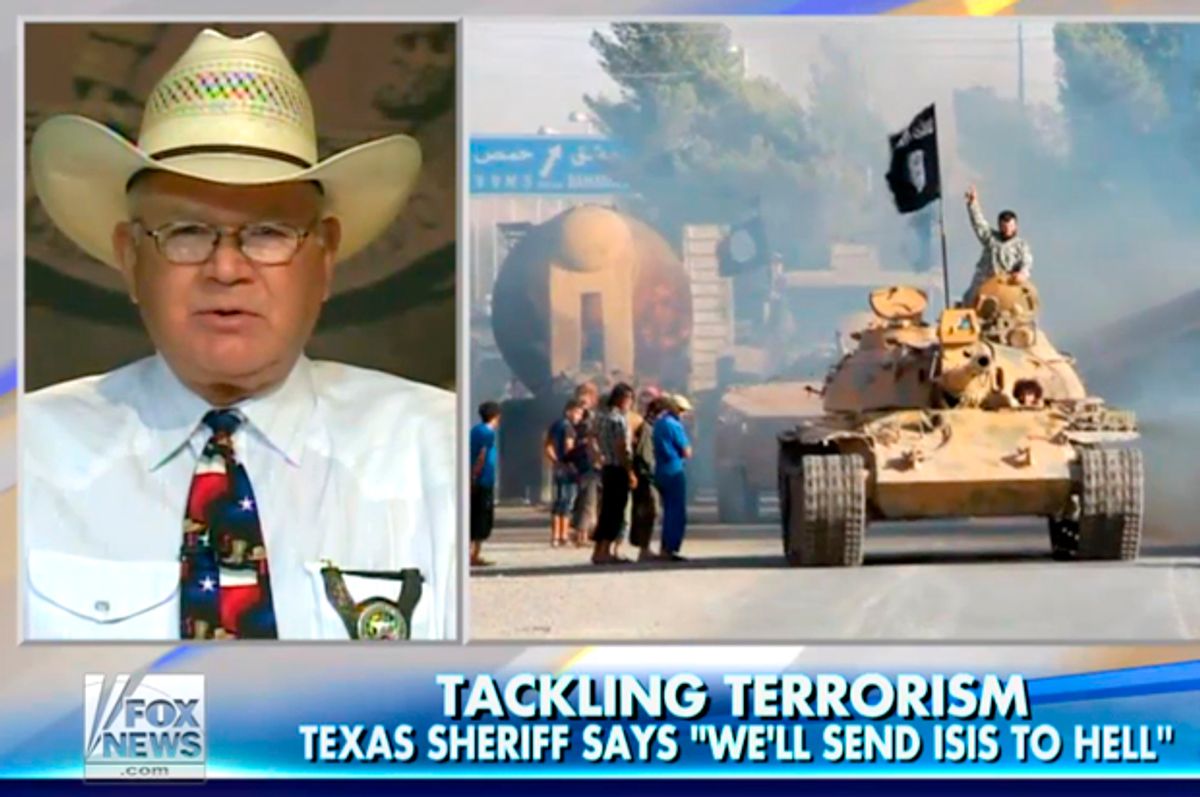 Beheadings aren’t enough, apparently. Right-wing promoters of eternal war have a new way to scare Americans into fighting ISIS: insisting the Islamic terrorists are sneaking into the “homeland” via the dangerous southern border that a feckless President Obama refuses to secure.

This fixation has migrated from the fringe of the fringe over on Breitbart.com, which shamed itself in July with headlines announcing that border officials had found a “Muslim prayer rug” at the Arizona border that turned out to be an Adidas soccer jersey. In August, Breitbart protégé James O’Keefe, the goofball behind the ACORN sting and other dumb stunts to entrap evil liberals, snuck across the border in a ludicrous Osama bin Laden costume, to “prove” America’s worst enemy could penetrate our weak southern flank, even though he’s dead.

When Taylor insisted officials “have the intelligence and the capability at our border” to block terrorists from crossing, McCain shot back: "Well, you know it’s interesting because a American reporter named James O’Keefe dressed as Osama bin Laden walked across the border at the Rio Grande river undetected. Does something like that concern you?" Taylor said O’Keefe was not “undetected,” and that border officials saw him and his crew, but McCain wasn’t satisfied.

Now it’s a full-blown panic. The Drudge Report’s top headline hypes “ISIS at the border?” even though the New York Times story it links to explains how the U.S. is working hard to debunk this conspiracy, though it can’t work faster than Fox News is hyping it.

Fox and Friends hosted Midland County Sheriff Gary Painter Monday morning, who claimed he’d found “Muslim clothing” and “Koran books” on his side of the border. Painter continued: “So we know that there are Muslims that have come across and are being smuggled into the United States. If they show their ugly head in their area, we'll send them to hell. I would like for 'em to hit 'em so hard and so often that every time they hear a propeller on a plane or a jet aircraft engine that they urinate down both legs. When you do that, then you've accomplished a lot."

The wingnuts at Judicial Watch are claiming ISIS is already in El Paso and that Fort Bliss is in danger. For weeks they’ve been warning that “chatter” has led government officials to secretly warn of “an imminent terrorist attack on the border.” No matter how much government officials deny there’s any evidence of such a plot, let alone any internal warnings, Judicial Watch keeps peddling the stories.

“President Obama or his administration should acknowledge this dire threat on the border, whatever its political ramifications are for the debate on immigration,” Judicial Watch president Tom Fitton told the Times. But the White House ignores the threat, he says, because it  “goes against the narrative that the border is secure” and we “don’t need to worry about illegal immigration.”

Fitton helps explain why the story is such Fox-bait: It’s a two-fer, letting the network channel its aging white audience’s fear of dirty, drug-running, gang-banging, Ebola-carrying future Democratic voters from Mexico and Latin America into a fear of ISIS, and whip them into a war frenzy. It’s no stretch to believe that the president they hate is working to help his two favorite constituencies – Muslim terrorists and illegal immigrants – by leaving the border open.

In response to similar headlines on right-wing sites like Washington Free Beacon, which also twisted Taylor’s testimony, the Department of Homeland Security issued a statement declaring, “There is no credible intelligence to suggest that there is an active plot by ISIL to attempt to cross the southern border.” But that hasn’t stopped the right from fomenting its "ISIS on the border" panic. Look for Sheriff Gary Painter to become a Sean Hannity regular sometime soon.