The 10 most trollish T-shirts ever sold

Urban Outfitters, with its faux blood-stained Kent State sweat shirt, has plenty of company in the retail world 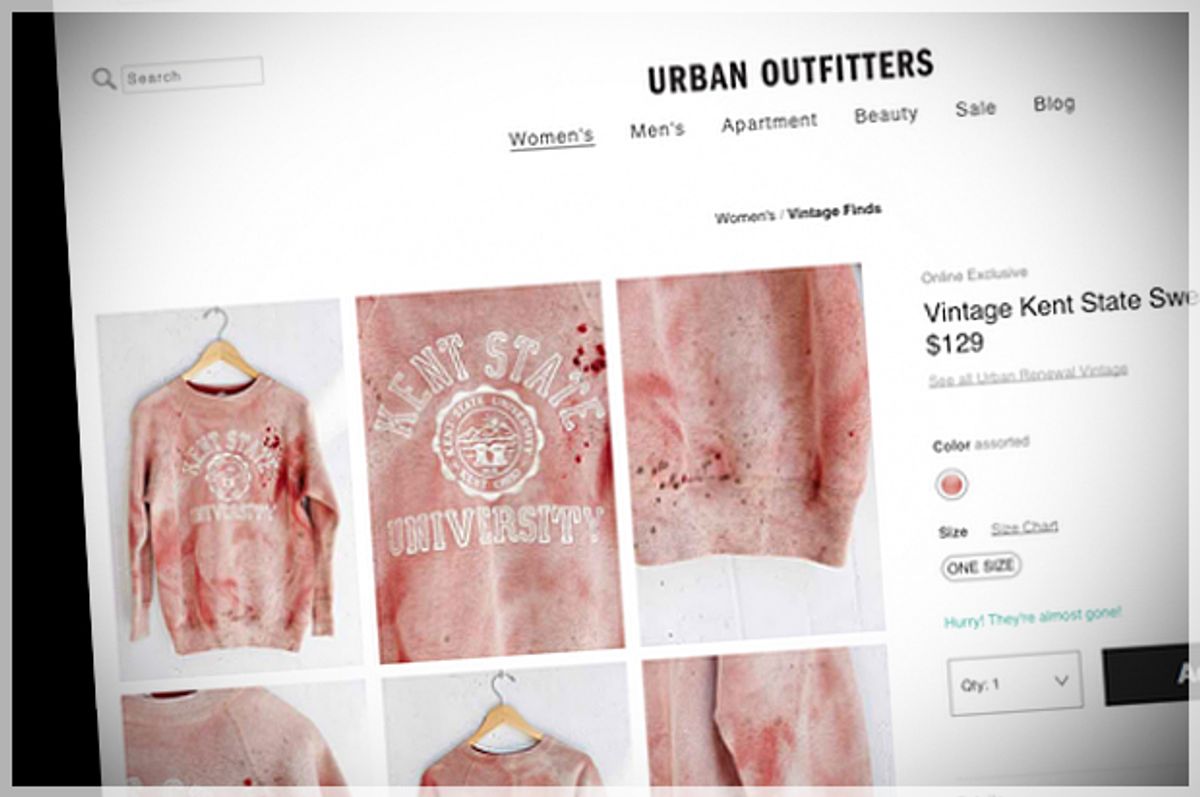 At this point, Urban Outfitters' business strategy is trolling us:  making headlines for a "vintage"-faux blood-stained Kent State sweat shirt that is clearly making light of the Kent State massacre. After getting a ton of bad P.R., the retailer issued a statement apologizing (was it worth it? We won't know until next quarter ...) but this shirt is just one of many poor fashion decisions that retailers have used to boost sales. Here's a sampling of the worst the Internet has to offer:

Spencer's Gifts offers a true smorgasbord for the casual misogynist -- here's one sample: Actress Sophia Bush described the "Eat Less" slogan on this women's T-shirt like this: "It’s like handing a suicidal person a loaded gun. You should know better." She boycotted the store and launched a campaign against the shirt, which Urban Outfitters eventually pulled from its site. How could Zara fail to realize that this shirt resembles the insignia that Nazis made Jews wear in World War II? (As a side note, Urban Outfitters has of course also produced its own Star of David shirts). This company that prides itself on making offensive shirts

Unlike most of the other shirts on this list, you can still buy these, and the creators are oddly proud of how offensive they are: Teenagers have sex, and it can be totally healthy, good, safe sex, but this American Apparel tee from the Dov Charney era is frankly borderline pedophilic and rapey. And their sexist shirts

Abercrombie, a company that has prided itself on controversy and faux-exclusivity, has also pushed come sexists shirts. Here's one of a sampling of many: "Keep Calm and Rape Off" by Solid Gold Bomb

This shirt, sold briefly on Amazon by third-party vendor Solid Gold Bomb, appeared alongside shirts of the "Keep Calm..." meme, including the charming "Keep Calm and Knife Her" and "Keep Calm and Rape Me." The slogans were the product of an auto-generator, but somehow passed unnoticed by human detection until Amazon shoppers saw it and complained: