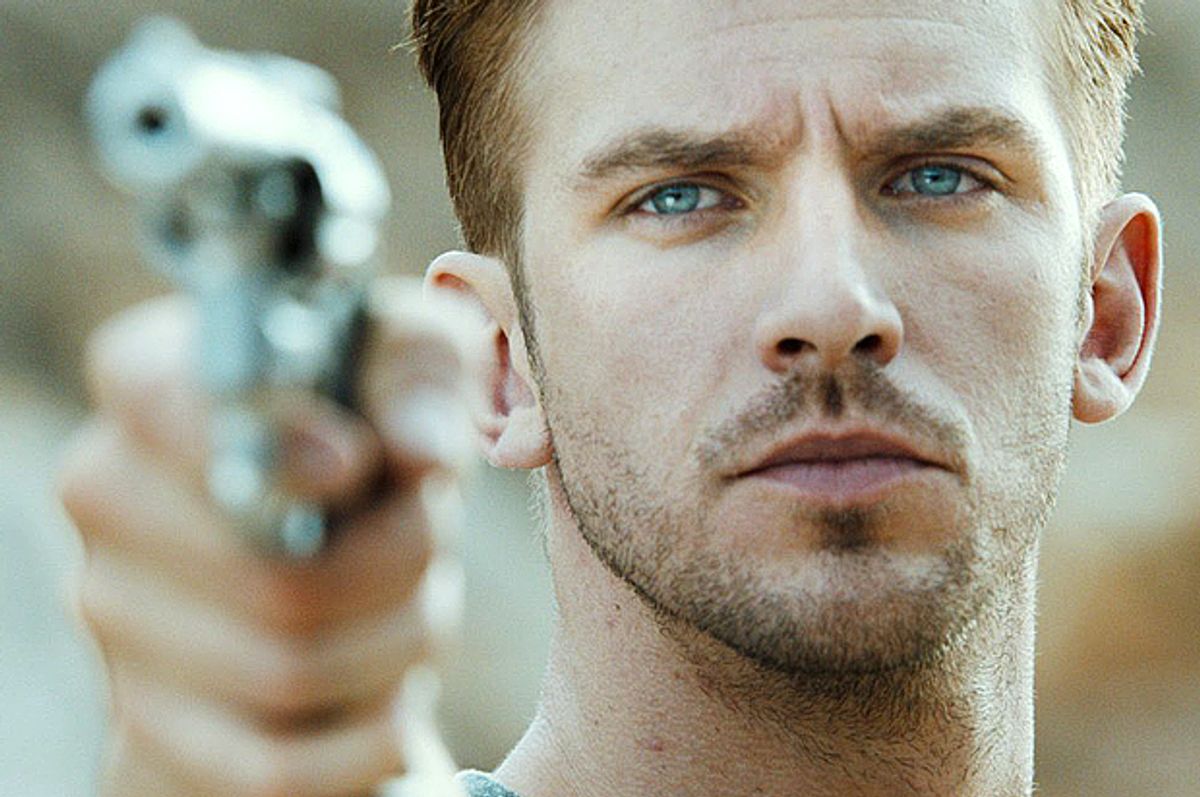 Dan Stevens in "The Guest" (Picturehouse)
--

Those who show up for director Adam Wingard’s low-budget indie thriller “The Guest” because it stars Dan Stevens, former heartthrob of “Downton Abbey,” may well find themselves perplexed. Still, if they stick around – and if they have the right sensibility for this black-comic, ‘80s-flavored B-movie – they’ll see a terrific performance at the heart of a witty, gruesome entertainment that hardly puts a foot wrong. I don’t know if we can call “The Guest” a good movie, since Wingard and screenwriter Simon Barrett have a lot invested in seeming disreputable. But I enjoyed it from beginning to end, and if you’ve been lamenting the dearth of violent genre movies that don’t assume the audience to be morons, you will too.

As for Dan Stevens, I say huzzah and well done, old chap. And also: Damn! He certainly puts his good looks and abundant charm to use as a mysterious war veteran who pays an unexpected visit to the family of a fallen comrade, but he has moved about as far away from Julian Fellowes’ aristocratic period drama as he possibly could. David (if that’s the character’s real name) has an unplaceable Middle American accent, with a slight twang that could be Missouri or Oklahoma or just years in the United States Army. I utterly forgot that Stevens was English while watching the film; his physical and verbal language are completely natural, with none of the overacting or ostentatiously flattened vowels that so often accompany Brit-doing-Yank.

And then there’s the fact that David’s pleasant, respectful demeanor, his easy smiles and his “sir” and “ma’am,” completely disappear any time he’s alone. He talks his way into the living room and the confidence of grieving mom Laura Peterson (Sheila Kelley) and then her boozy, frustrated husband, Spencer (Leland Orser), protesting all the while that he doesn’t mean to impose and won’t stay longer than a day or two. Those two both give strong performances even if they seem to be in different movies, which may be the point. Orser plays an emasculated and small-minded dad out of a sitcom, while Kelley is all internalized emotion and squelched desire. Her yearning for her dead son is what David preys on, so to speak, but she’s more than a willing participant.

After Laura shows her guest to the bedroom of her late son, Caleb, with whom David supposedly trained and served in the Middle East, David sits on the bed in the dark, his eyes glittering, and all that gentleman-soldier affect falls away. And out in the audience we grab each other and exclaim, “Holy crap! That guy’s crazy!” But Wingard and screenwriter Simon Barrett handle this ancient fairy tale – for that’s what it is – about the unexpected guest with surprising delicacy. Or let’s say surprising delicacy amid the bloodshed, sight gags and deliberately tinny guitar-rock soundtrack.

David may indeed be nuts, and as he apologetically tells Laura during a scene of extended mayhem late in the film, he has not been fully honest with her about who he is, or the nature of his past association with Caleb. But the question of whether he’s evil, and who or what he represents, is largely left up to us. As in the old stories, inviting the guest into your home is a fateful decision, one that indicates you want him to bring all the things he carries, whether you know it or not. Indeed, David repeatedly offers to leave during his first day or so in the Peterson house, and there’s no reason to doubt his sincerity. But he’s not the kind of guy who’ll turn down hospitality that is freely offered, and his military honor won’t let him forget that he now owes the Petersons a debt.

Most of David’s adventures in the Petersons’ bland suburban town are best left for you to discover. Let’s say for now that Barrett’s screenplay balances difficult notes of action thriller, horror movie, teen comedy and black-hearted farce with aplomb. David takes Caleb’s younger brother, the awkward and victimized Luke (Brendan Meyer), under his wing, administering the traditional beatdown to the bullies who torment Luke and instructing him in the fine art of psychopathic payback. As for Luke’s big sister, Anna (Maika Monroe), she doesn’t trust David from the start, and actually phones the military to find out whether he is who he says he is. She still can’t keep her eyes off him when he comes out of the shower, and in his own way David has Anna’s best interests at heart. That boyfriend of hers, Zeke (Chase Williamson), is a drug-dealing lowlife; if he ends up framed for a crime he didn’t actually commit, there’s a certain rough justice at work.

None of those things is a big spoiler, I promise. The point is that David functions partly like a tornado and partly like a wish-granting genie; he’s a gleeful force of chaos and destruction who seeks to enact all the Petersons’ unconscious desires in reality. Ultimately we get a concocted back story that more or less explains what’s going on, with the always enjoyable Lance Reddick (of “The Wire,” “Fringe,” etc.) as a special-forces officer tasked with hunting David down. I’m honestly not sure any of that exposition is necessary, except that it sets up a full-scale military firefight in and around the Petersons’ ranch house, one that eventually encompasses most of their town. It also establishes, in case we had any doubt, that David can’t help being who or what he is. In his own dispassionate and disconnected fashion, David feels bad about the wholesale slaughter that comes with him. If I wanted to accuse Wingard and Barrett of making a point, I might say that the United States military feels the same distant regret about the innocent villagers in Wherever-istan who are unfortunate enough to get blown up by drones aimed at “terrorists.”

Wingard finishes with a masterful hide-and-chase sequence that is both lyrical and ridiculous, as David and his surviving pursuers play cat-and-mouse inside a “Halloween maze” constructed for a high-school dance. I want to claim that no movie has ever before referenced the ‘80s teen slasher-film tradition and Orson Welles’ “The Lady From Shanghai” in the same scene, but that probably isn’t true. (Don’t get me started on the Tarkovsky references in “Jason X” from 2002.) Similarly, you could describe the blatantly sequel-friendly “false ending” of “The Guest” as an homage to shameless crap movies of yesteryear. But maybe it’s just what it appears to be: a plea for some producer to give these guys more money to bring back Stevens’ indestructible super-soldier for another round of massive comic-karmic payback. Either way works for me, and either way “The Guest” ought to be a sneaky surprise hit.