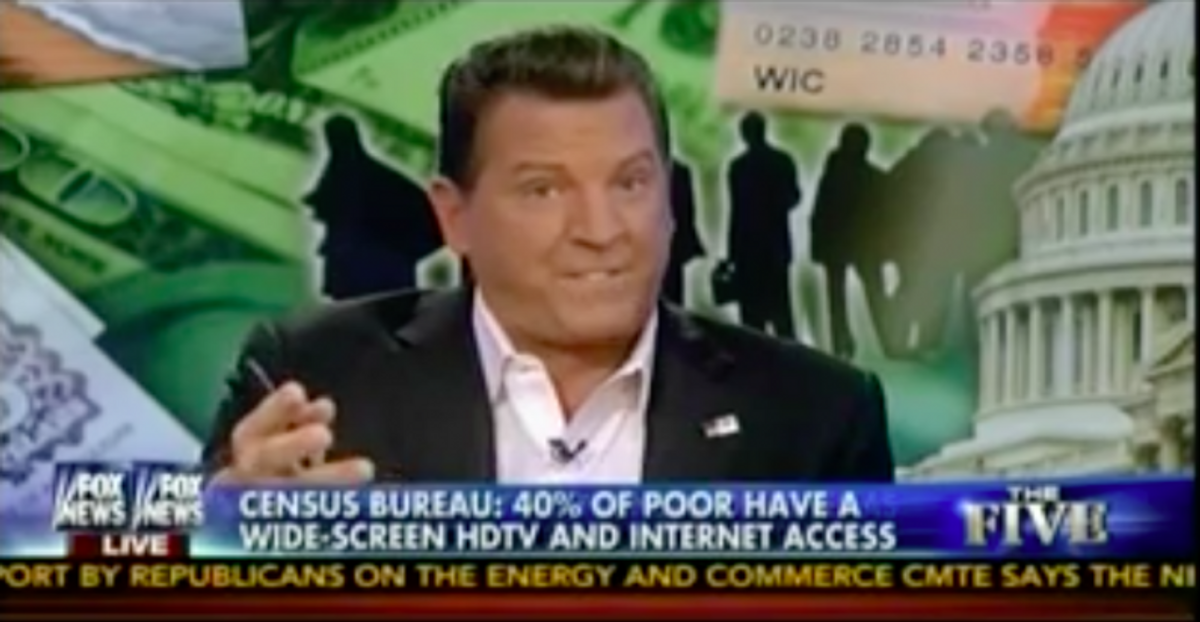 On Tuesday's edition of Fox's "The Five," the hosts had a meaningful discussion about poverty and the U.S. government's insistence on providing welfare for people who aren't even poor to begin with!

"This war against poverty was plotted to continue indefinitely, so the census counts a family as poor but excludes the government spending that they get, the programs they get from that actual income," said Greg Gutfeld. "So what happens is it guarantees that programs will grow while poverty is unchanged because you're not counting the money they're getting. It's not a war on poverty, it's actually a zombie that you can't kill ... Stop throwing money at it, this is crazy!"

Eric Bolling responded: "They track the poverty level, they come up with their numbers that this is poverty, and if anyone falls below that poverty line they continue to give them stuff, and then they keep lowering that bar. So as the economy gets bigger and better, the bar goes down. That's why when we started there were somewhere around 20 million people on means-tested poverty programs and now there are 45 million people that fall under the poverty number."

Meanwhile, the text below the Five's talking heads seemed to question whether or not these millions of Americans receiving welfare benefits actually were really poor. They said: "The Typical Family That The Census Identifies As 'Poor' Has AC, Cable TV, And A Computer," and "40% Of Poor Have A Wide-Screen HDTV And Internet Access."

Media Matters pointed out that these chyrons referenced numbers from a Heritage Foundation report that claims "that the actual living conditions of the more than 45 million people deemed 'poor' by the Census Bureau differ greatly from popular conceptions of poverty [because many 'poor' people have] consumer items that were luxuries or significant purchases for the middle class a few decades ago."

Surely, Fox News and Heritage Foundation realize that advancements in technological innovation mean that these "luxuries" cost a fraction of what they did decades ago, and are actually necessities in a modern world, with the U.N. classifying Internet access as a human right.

The Center for American Progress responded to the Heritage Foundation's report, pointing out that these "amenities" are actually worth very little money, but a whole lot in being able to live a productive life. "To avoid a real discussion of these issues," the article says, "the Heritage Foundation craftily creates indexes that rank households on skewed measures of 'amenities' that suggest that no further federal action is needed to buoy the standard of living of poor and working-class families. Such indexes are heartless and foolish. Heartless because they ignore the fact that it takes much more than a few appliances to support a family. And foolish because they lend credence to the calls for cutting the supports that research has shown are necessary for every child to become a healthy and productive adult."