"This isn't literary": Alison Bechdel, Roz Chast and why it's so hard for us to take comics seriously

At every literary prize I've judged, I've heard some juror complain that they don't know how to evaluate comics 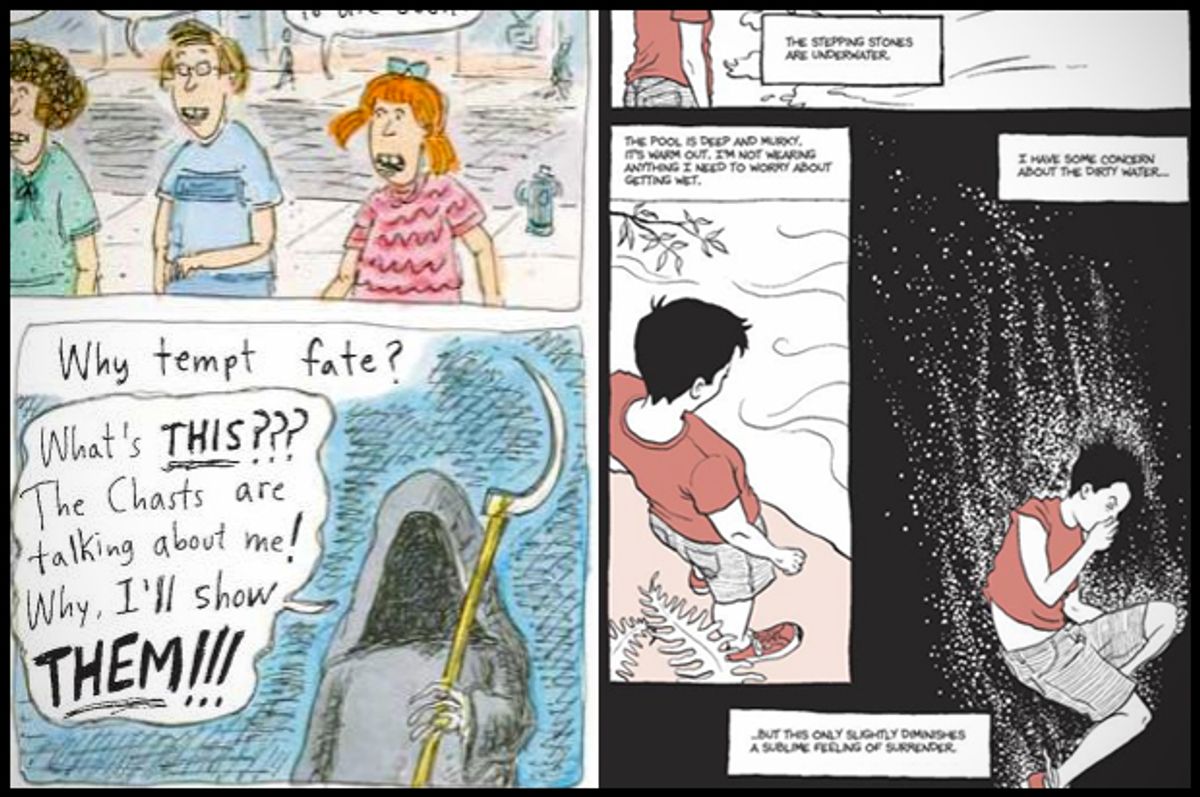 Details from Roz Chast's "Can't We Talk about Something More Pleasant?: A Memoir" and Alison Bechdel's "Are You My Mother?" (Bloomsbury USA/Mariner Books)
--

Yes, major literary prize announcements are usually greeted with a fair amount of criticism, often deserved, but in recent times, I’d argue, more than the honor they confer, the conversation such awards bring is much more important or at least as important to the culture. Most of the time, there is a good amount of second-guessing, and a few good digs, some ridiculous accusations, and at some point the discussion gets around to “who really should have won.” And in the case of the MacArthur, there are the usual “Hey, I didn’t get one” Facebook posts you see each year, which typically neglects the arduous selection process and the accomplishments of the winners.

There’s also a lot of criticism for the nonfiction long list of the National Book Award this year, pointing out how many good books by women were ignored this year, and it’s certainly justified — by any accounting, Eula Biss, Leslie Jamison, Roxane Gay, Jennifer Percy were all robbed. But so was anyone who wrote narrative nonfiction. There is only one narrative nonfiction selection on the list, and that is Roz Chast.

Her inclusion on the list, and Bechdel’s award, would be remarkable for any number of reasons. We could begin by talking about how any kind of creative work by women is usually undervalued. We could talk about how Bechdel is an out lesbian, and even with her recent mainstream success, began her career making comics that appeared in feminist journals like Off Our Backs. We could talk about how Chast is known primarily as a humorist, a regular contributor of comics to the New Yorker — this is an elite category. But it is elite within a neglected category.  Everyone will tell you how hard it is to be funny, and yet no one wants to give you a prize if you are. Likewise, most people will tell you they can’t draw, and yet will turn right around, and dismiss the value of a comic. So much so that I would like to draw your attention to another conversation, the one that precedes the giving of such awards, and how it goes, approximately, if comics are involved:

“I don’t know why this is here.” “I don’t know how to evaluate this.” “Shouldn’t comics have their own category?” “This isn’t literary.”

As a frequent juror on prizes, colonies and fellowships, I am, it could be said, so tired of this, that in fact, I will fight you for Roz Chast’s right to be on this list. I will fight you for the right for Bechdel to get that MacArthur. In a ring, covered in grease, MMA style. That is how sick of it I am.

I’ll begin with that frequently kicked term, "literary." What is literary? Well, for the sake of this piece, and those juries, probably the least snide definition I can offer is that it is writing that offers quality of insight into the human condition. And humor, I think we can say, is deeply literary. The novelist Jess Walter tweeted a quote by Milan Kundera just the other day that I think brings it home: “The tragic brings us consolation. The comic is crueler: it brutally reveals the meaninglessness of everything.”

So, give it a shot. Have you ever tried to make a comic? Please, do, and then tell me how easy it is, and how childish. Give it a shot. Show me your award-winning comic that you dashed off in an afternoon — because that is essentially the heart of the accusation from skeptics who try to preclude their inclusion in the serious awards. They believe, without any proof, that it can be done quickly. The truth is that drawing is perhaps the only thing harder than writing, and telling stories out of the mix, even harder than both. You are looking for a balance, one I think Marjane Satrapi described best, when she said, “I write what I can’t draw, and I draw what I can’t write.” The best of these works give us stories in a way that other mediums cannot. They do not supplant other kinds of storytelling but create a new place for stories to be told, stories that could not be told any other way.

Some of the problems comics face in being taken seriously does come from the creators themselves — some of whom are uneasy with being taken seriously. Some of the best deride the term "graphic novel" at any opportunity, which is partly why I’m using the word "comics" in this very piece. And some of the problem certainly comes from the way in which comics are one of the earliest forms we encounter, and we are encouraged, despite decreasing evidence, to believe comics are for children, and should not be read by serious adults. Way before people scoffed at you for reading YA, they scoffed if you read comics. And this is a uniquely American provincial take, to be sure — cultures around the world all take comics seriously. We as Americans do not. Not yet.

It may be that we are in a critical interregnum, that in a few years, all of these prizes will have specific categories for graphic memoir, graphic novel, graphic journalism; but for now, we have this.

If you look at the careers of both women, though, they might deserve many more awards than this. They have had to succeed as humorists, as memoirists, and then as comics creators, facing down armies of skeptics of every stripe to get this far. With this kind of notice, Bechdel and Chast have moved the needle for all of these forms, not just comics, as a whole, and whether you make comics or not, read them or not, this is something we all benefit from. If I were making a cartoon for the end of this, it would be their faces with the caption, “You’re welcome.”

Be sure to thank them.