NRA's Ray Rice outrage: Condemns his abuse, still wants violent men like him to own guns

A new video out from the NRA accuses gun reform advocates of hurting women. Laugh or cry -- your pick 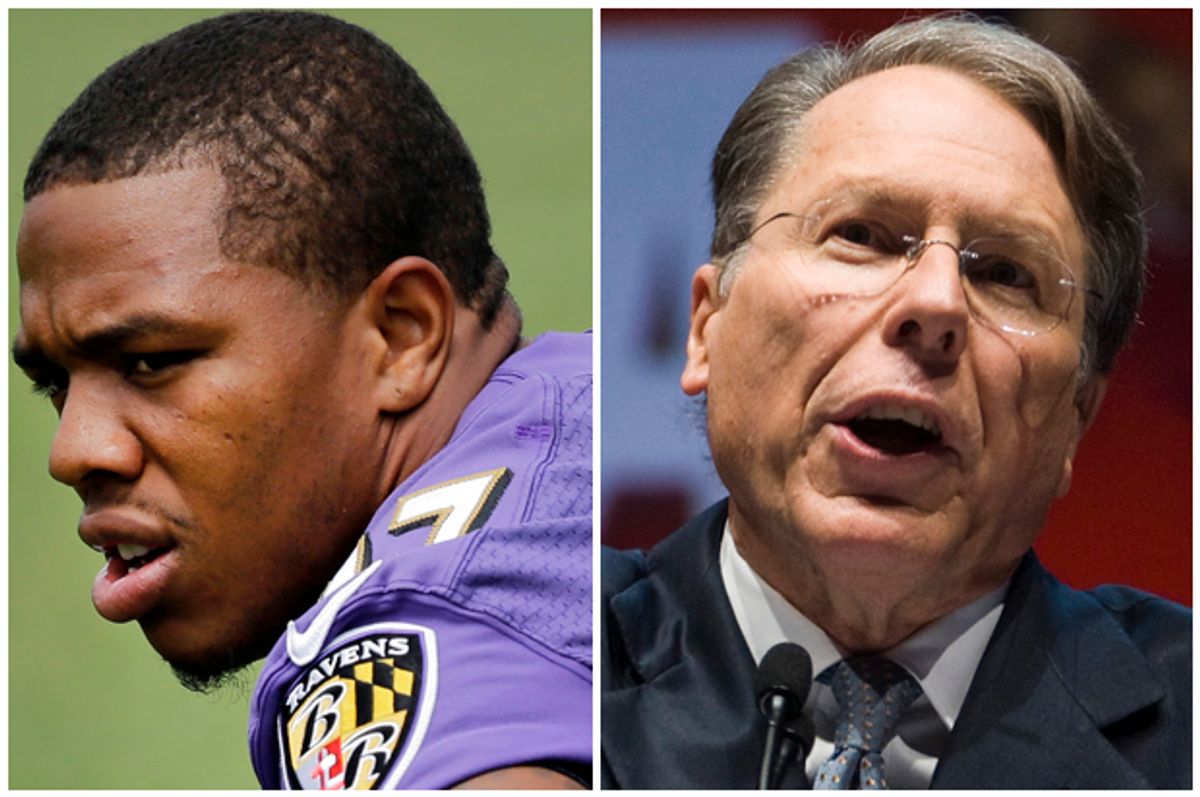 The National Rifle Association has slithered into the conversation about Ray Rice and intimate partner violence. In a video released this week, NRA News commentator Colion Noir argues that people who support gun reform are "providing an example to young men that it's okay to beat women as long as you can throw a football."

It takes him a minute to get to this point, so let's talk about what comes first. Noir draws a comparison between Atlantic County prosecutor James McClain's treatment of Rice and his treatment of Shaneen Allen, a black single mother who is facing three years in prison for a gun violation.

McClain allowed Rice to avoid prosecution on felony assault charges by entering a pretrial diversion program, a move that has been widely criticized among anti-domestic violence advocates. But Allen -- who has a valid license to carry a firearm in Pennsylvania, but was arrested for bringing it into New Jersey, a state that does not have a reciprocity agreement with Pennsylvania -- was denied pretrial intervention. (Allen was pulled over during a traffic stop, and voluntarily told the officer that she had the gun in her car. New Jersey prosecutors are now reviewing the charges, and Allen may be allowed to enter a pretrial diversion program.)

So there is a very serious point to be made here about mandatory sentencing requirements, and how the application of those requirements is raced and classed in our judicial system. As Radley Balko pointed out at the Washington Post, available data shows that black people are much more likely to be charged and convicted of federal gun crimes that carry mandatory minimums. "They were also more likely to be hit with 'enhancement' penalties that added to their sentences," he explained. "In fact, the racial discrepancy for mandatory minimums was even higher than the aforementioned disparity for federal gun crimes in general."

Now Noir and the NRA could have left it at that, pointing to the system that threatens to jail a single mother for a nonviolent offense while allowing a man who committed a very violent offense to avoid prosecution. Instead, Noir grandstands about the NRA's concern for women, accusing gun control advocates of "perpetuating the very cycle that contributes to the violence in this country, all the while providing an example to young men that it's OK to beat women."

A few things Noir failed to point out while expressing his deep concern for the safety of women and their families. Earlier this year, the Senate Judiciary Committee held a hearing on domestic violence and guns in order to debate strengthening restrictions that keep guns out of the hands of domestic abusers. Current federal law prevents some people with histories of domestic violence from owning guns, including people with felony convictions and domestic abusers subject to permanent protective orders. But convicted stalkers, people subject to temporary restraining orders and domestic abusers in dating relationships are still allowed to own deadly weapons. And the move to close the holes in current policies is actually pretty uncontroversial, even among some gun owners.

But not among the NRA's leadership. The NRA is fighting very, very hard to keep guns in the hands of men who abuse women. As Dana Liebelson at Mother Jones pointed out in a piece on the push for stronger restrictions, the NRA argued in a letter to lawmakers that such legislation "manipulates emotionally compelling issues such as 'domestic violence' and 'stalking' simply to cast as wide a net as possible for federal firearm prohibitions."

Noir also failed to mention that nearly 60 percent of women killed by a firearm in 2010 were murdered by a current or former intimate partner, and that the presence of a firearm during a domestic violence incident increases the likelihood of a homicide by 500 percent. And according to recent data from the Violence Policy Center, "Black women are murdered by men at a rate more than two and a half times higher than white women," and at least half of these murders were a result of domestic violence, according to executive director Josh Sugarmann.

But perhaps the most egregious omission from Noir's commentary is the fact that men like Ray Rice -- abusers with no criminal conviction to speak of but a clear and dangerous willingness to use violence against their partners -- are exactly who the NRA is fighting to keep armed and deadly right now.