As we enter the home stretch, campaign ads aren't getting any less dumb. Let's make fun of them 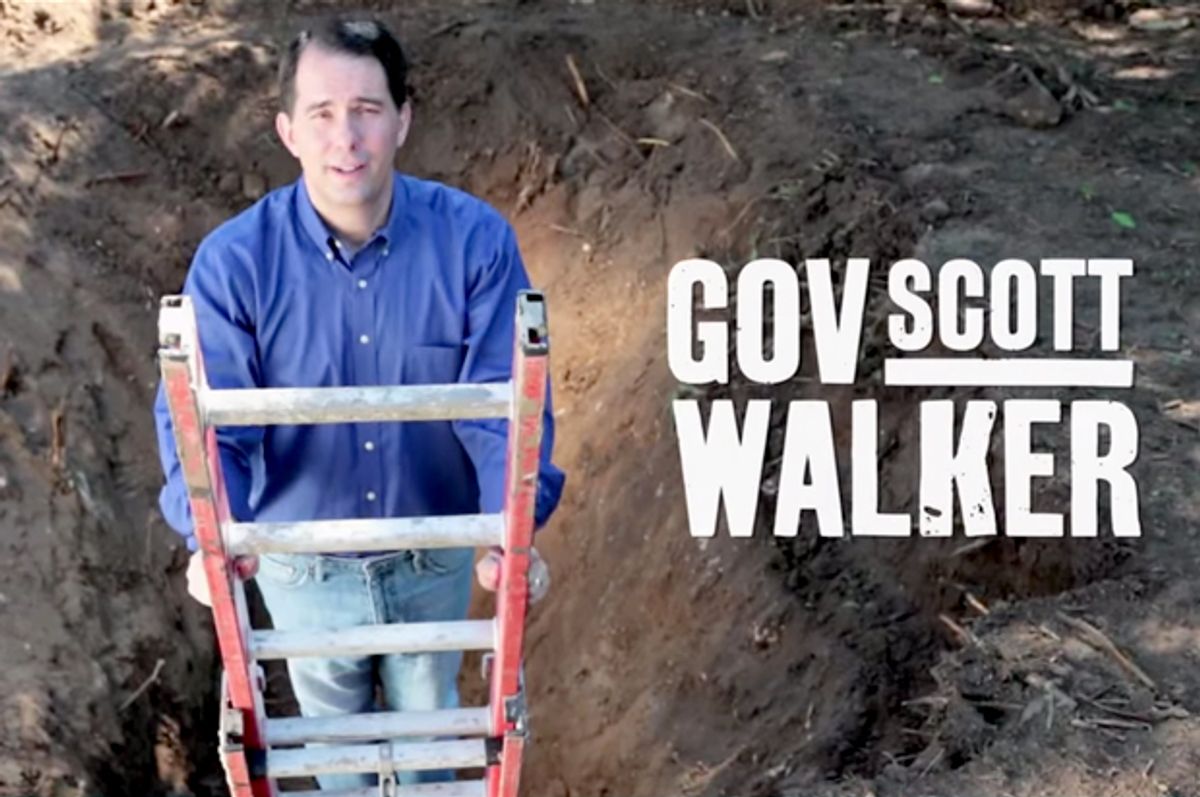 It's mid-September in an election season, and campaigns, super PACs and their classier older brothers in "social welfare," 501(c)(4) nonprofits, are spending untold millions of the dollars acquired via spam emails to produce candidates' "personal branding statements," aka television ads. They are mostly all terrible. Wouldn't you like to see them? Salon's General Election Stupid Ad Watch is here for you: We watch the ads so that you don't hav ... we watch the ads so that we can then aggregate them and you can watch them, on the computer. Let's catch up on the latest phase of the Great American Dumbing Project.

Here is Wisconsin Gov. Scott Walker going lo-fi and climbing a ladder out of a hole. Dimensionally, it's much like the hole in which he buried a century's worth of hard-won labor rights a few years ago. Why is he in a hole? According to Scott Walker, this hole represents the state of Wisconsin's finances when he took office. It's taken a term's worth of hard work, he says, to climb out of that hole. This hard work is represented by him climbing a few rungs of a ladder. Just look at that hand-eye coordination, as he climbs while looking into the camera. His opponent, Mary Burke, probably can't climb a few rungs of a ladder, because she is a girl Democrat.

Oh my God, this one.

A little background: Earlier this year, Sen. Mark Begich of Alaska released a typical red-state Democrat ad promoting his work of crapping all over environmental regulations. He brags about how his "years-long fight for Arctic drilling produced historic permits despite objections from the Department of Interior, EPA, NOAA, national Democrats and the White House." A true liberal lion. But whatever.

That ad prompted the one you see above from the campaign of his opponent, Dan Sullivan. It features some Xtreme snow bro, a four-time X Games medalist. The backwards hat, scruffy hair and bouncy guitar riffs indicate that Cory Davis doesn't get busy, he gets biz-zay. "I know something about snow machines," Davis tells us after establishing his credentials. He accuses Begich of "pretending to ride" a "snow machine" in his ad. "I'm tired of the phony politicians and Mark Begich’s laaaaame tricks." (Yes, he really does hold that "a." Cory Davis has had it up to here with these clowns in Washington.)

Well, Mark Begich just wasn't going to let this stand. And so he's validated a terrible ad's terrible effectiveness by getting defensive in response. He wasn't "pretending to ride" anything -- lives went on the line to make that ad! It was like the making of goddamn "Apocalypse Now" out there!

In an interview, Begich described the lengths to which he went to shoot the spot.

“One guy for example, wore an AR-15 around his shoulders because the area we were going to is where polar bears are, and he wanted to make sure we weren’t going to be attacked,” Begich said. “To say that I wasn’t on that snow machine riding it? I rode it for a long time out there and in weather that was very cold that day to the point where I frostbit part of my ear.”

What snowmobiles are to Alaska's Senate race, rifles are to Kentucky's. The ~$20 million or so bout between Alison Lundergan Grimes and Sen. Mitch McConnell has descended into a televised war about who does gun stuff better.

Earlier in the week, Grimes released an ad where she shoots guns for a while, declares that she is not Barack Obama, and tells Mitch McConnell that he doesn't know how to handle a gun properly. McConnell's campaign responded quickly with the little number above, in which he says, umm, yes you are Barack Obama, you love everything Barack Obama does, such as taking people's guns away and full communism. Then the ad flashes an image of Barack Obama shooting a rifle much like Alison Lundergan Grimes shoots a rifle. As in: They were both stunts, designed to TRICK the viewer and CONCEAL their gun-grabbing proclivities. Whereas Mitch McConnell holding a rifle at CPAC was not a stunt, or something. Tens of millions of dollars in this race, folks.

Here's a normal ad featuring normal Colorado women talking about normal issues in a normal kitchen with normal mugs of coffee. It was assembled by the normal Karl Rove's normal "social welfare" nonprofit, Crossroads GPS. Just some gals gabbin' about the latest politics stuff, in Colorado. "Unfortunately, after 15 years in Washington, political scare tactics are all Mark Udall has left" is a typical piece of normal conversation that one of the normal women (she is furious) says to her normal friends. Another normal woman (also furious) complains that "Udall voted against Keystone." The Keystone XL pipeline's proposed path doesn't run through Colorado, but it probably does affect the financial interests of roaming normal billionaires who cut Karl Rove fat checks to channel the angst of normal women.