The centrist advocacy group has big plans for '16: A bold menu of vague concepts that everyone already agrees with! 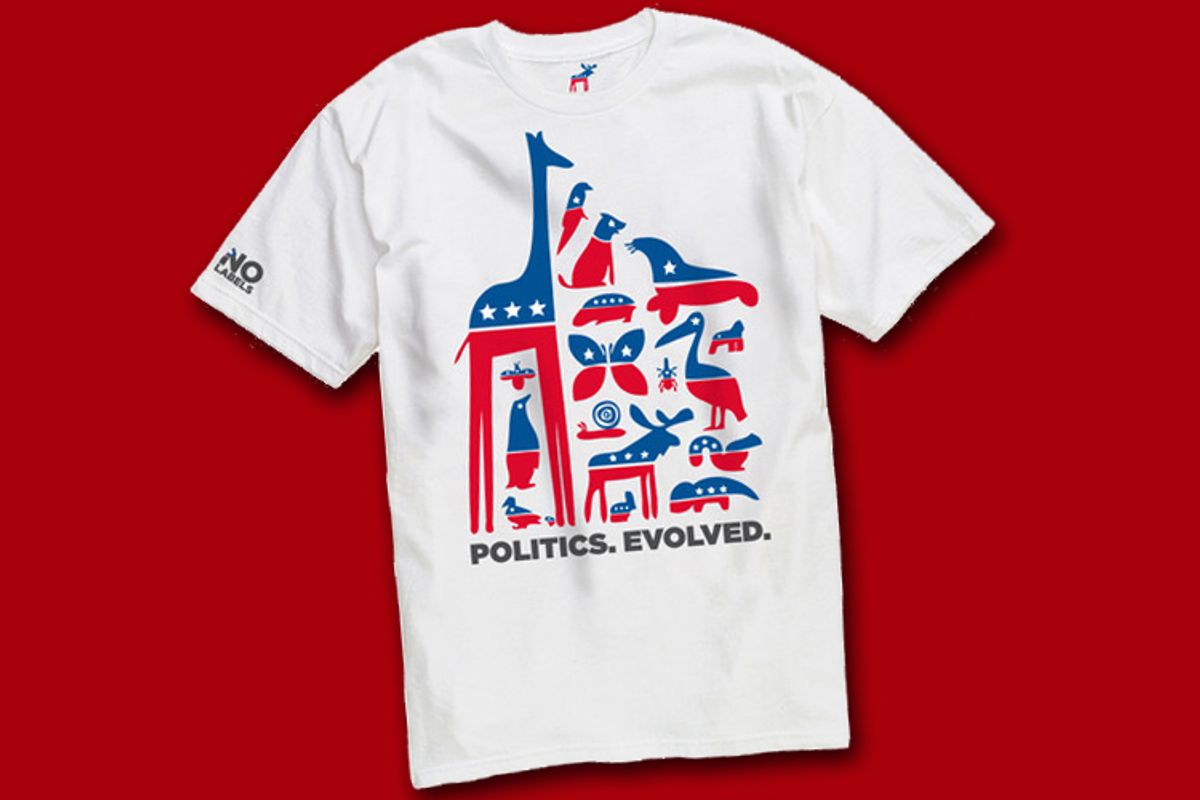 Members of faddish political sensation No Labels, the simultaneously right-leaning nonpartisan advocacy group, gathered in Washington yesterday to begin drafting a document called the "National Strategic Agenda." It is designed to be a 2016 policy platform for The People, when what it will mostly represent is the centrist deficit-cutting policies favored by rich people who don't understand politics.

If the idea of a National Strategic Agenda representing the interests of rich people sounds chilling in a "late-1940s cold-blooded CIA document outlining the strategy for post-war imperialist agenda" sort of way, that's understandable. But don't worry, it's just another exercise in vanity, like most things are. No Labels has money, and a plan. "The organization," Real Clear Politics reports, "is putting together an agenda and vision for the country; wooing big-dollar donors; building grassroots support; and planning visits to early-voting states, complete with surrogates to articulate their ideas."

One of these does not fit with the others.

It's perfectly reasonable to believe that an outfit like No Labels would gather big-dollar donors around an agenda that suits big-dollar donors' policy preferences and then spend a lot of the big-dollar donors' money purchasing television ads in and sending big-dollar donors' centrist friends to early primary states, to prattle on about deficit baselines and how we need to "come together." It's that thing about "grassroots support," though. Is No Labels going to be able to earnestly attract swarms of human volunteers to attend political events in Iowa and New Hampshire? Will they chant nonpartisan slogans like, "What do we want? Budget solvency! When do we want it? In the medium-term fiscal horizon!"

We'd pay to witness such an entertaining sight, but it's not likely to happen unless people are being paid to say it. Because the organizing principles that No Labels decided yesterday it wants presidential candidates to adhere to are so vague that they're things each party already wants, but has different plans for approaching. There is no way to de-"politicize" issues on which the two parties are organized around completely different principles.

Here, according to the Associated Press,are No Labels' big policy goals that apparently required a day's worth of conferencing to nail down:

—Create 25 million new jobs over a decade. —Secure Social Security and Medicare for another 75 years. —Make the United States "energy secure" by 2024. —Balance the federal budget by 2030.

No Labels expects to flesh out these goals over the course of the next year, and one suspects that as it does so, its solutions will gravitate somewhere near the center-right of the political spectrum. For now, though, these four goals -- more jobs, ensure the solvency of the major social insurance programs, ensure "energy security," and balance the budget eventually -- are ideas that won't require much pressure for presidential candidates to subscribe to. They all already do, just in different ways.

Every president of either party for the past 40 or so years has included a plank in his State of the Union address about how he''ll make America "energy secure," uhh, by some point. Democrats will talk up investing in alternative energies, Republicans will demand more drilling. And the question of how to balance the budget over the medium- or long-term encompasses questions about everything else. Democrats will point out that it's largely a matter of reining in medical inflation. Republicans will say it's about cutting "entitlement" spending and reducing taxes to bring in more revenue, because we are always and forever on the downward slope of the Laffer Curve.

No Labels settled on these goals "based on 90 town hall-style meetings in early nominating states." One town hall, or simply a light scanning of common sense, would've done the trick -- they're all goals that people across the spectrum don't object to. The reason they don't happen isn't (just) because politicians enjoy "bickering." It's that people have different theories of how to approach them, based on their own priorities and theories of politics.

If No Labels wants politicians to "get things done," it would be better off looking at reforming the structures of governance -- making the legislature more or a parliamentary body so that leaders are able to enact the reforms on which they were elected, for example. But it's easier to just claim that all of Washington's problems are because politicians are weird.