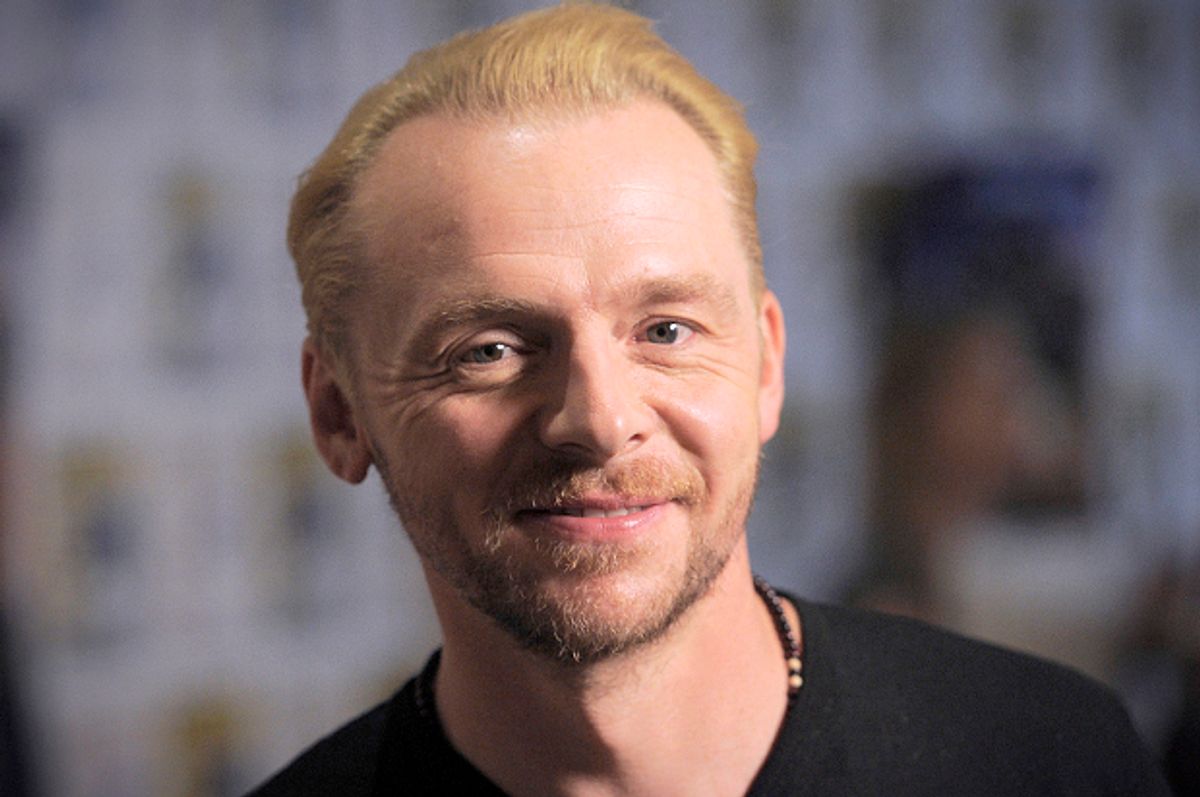 Ok, I’ll admit it: I had a small spiritual awakening after viewing "Hector and the Search for Happiness." Call it a momentary lapse of cynicism, but I fell for this story of a spiritually exhausted London therapist (Pegg) on a globetrotting odyssey to uncover the root of happiness. Sure, it’s a privileged white male "Eat Pray Love" fantasy, but the film ultimately succeeds, largely due to the winning performance of Simon Pegg. Taking a step outside his self-aware, savvy geek persona, Pegg plays Hector as a clueless geek, a man so entrenched in his aesthetically perfect life that he has developed blinders to his patients, the outside world and his wife (Rosamund Pike). The journey of self-discovery is alternately comic and threatening, as Hector attempts to experience everything removed from his safely cosmetic existence.

Directed by Peter Chelsom, based on the bestseller by Francois Lelord, "Hector and the Search for Happiness" has allowed Pegg to ponder happiness in his own life, and the weighted history of his "Three Flavours Cornetto" trilogy.

What attracted you to this story?

I had a kickoff dinner for something I was doing with Frank Darabont, and sat next to the casting directors and was chatting away with them. They suddenly looked at me kind of strangely and said, “You know what? You should talk to Peter Chelsom about a film.” I knew Peter from "Hear My Song" and "Funny Bones," which were two films that he made when he was a filmmaker in the UK. I immediately was interested and went away, read the script and liked it, and then Peter and I had dinner and got along, and that was all she wrote.

What did you relate to in Hector? He’s quite the bumbler initially, but eventually finds his inner badass.

I liked him as a character because he was almost the polar opposite to some of the characters I’ve played in the past. I’ve played some characters who are sort of the perennial child, who grow up and can’t migrate into adulthood, where Hector is someone who has gone into adulthood and shut the door quite early. He has no connection with that inner child and his younger self, and can’t access it. For that reason, he can’t be happy because there is a definite correlation between knowing ourselves as children and adults as a route to being happy.

I found Hector reconnecting with his inner child, and as a result, everyone else in his life, very moving.

When we’re kids and young, we set so many of our emotional parameters. We learn about loss, joy and love and all of those things. Our opinions are shaped at a very early age, so it’s important to stay in touch with those early appraisals of those things because it helps us in later life.

A nice perk of the film must have been the globetrotting, but I have to assume that everything didn’t run smoothly.

[Laughs]. In a film of this scale, even though it wasn’t a huge budget, we still went to all of those places and were contending with various setbacks and had to think on our feet a lot of the time. I’m a firm believer in that being a very positive thing. I don’t think you should have it easy when you’re being creative. The enemy of creativity is calm. You always come up with your best stuff when you’re up against the wall. I think sometimes you get movies that have gigantic budgets that end up being beige messes because everything was handed to everybody and they did what was on the page.

What was your favorite location? Are you a traveler personally?

Very much so. I do like to travel and I’m lucky because I get to travel a lot for my job. I think my favorite location was South Africa. I felt a huge connection to it. I felt very lucky to be there and as someone who watched that society from afar as a kid — I wore my anti-Apartheid badge and didn’t eat grapes — it was amazing to go there and see the aftermath of that situation, which is not entirely different to what it was when it was actually in operation. Apartheid is a political system but it’s also a social system. The social system carries on way after the political system is gone. It was amazing in terms of the film to see people living in extremely difficult conditions but, nevertheless, experiencing happiness. The people living there knew what happiness was because they felt the opposite. Their daily life was very much about the opposite, so when they were happy, it was very genuine.

You worked with locals?

We worked with a lot of locals. We filmed in a village that had no water or electricity. We went in there and got everything working for them. We connected everything up to a generator and a lot of the scenes with big crowds of people were real people helping us out. It was incredible. There was an extra that we picked as the Mom of a guy who was being operated on, and we just said, “Can you just sort of be worried?” She suddenly became this mother who was fretting about her child. We all looked at her like, “Where did she come from?” It was amazing. Sometimes supporting actors are biological scenery. They’ll be there and do a job but some of the people in South Africa were just born to it. It was something else.

You had to go to some pretty heavy places emotionally. How did you prepare yourself mentally?

I’m not a huge method actor. I subscribe to the Laurence Olivier school of “Just act, dear boy.” When you’re doing stuff when you’re being threatened, your life’s being threatened or you’re feeling extremely emotional, you have to psych yourself up. I’d have to take some time to get ready to do it, and not just drop into it. Peter Chelsom always made it very easy for me to do. He’d make sure the conditions were right. He was very sensitive to the environment I was in, and how that would help me get into character. He’d play music before the take or help me find the point I was supposed to be at. It was really helpful. The scene where I’m being threatened with a gun, I’d been away for 10 days because I had to do "Star Trek" press. I came back my first day to South Africa to this abandoned house in Gordonia, South Africa and had to go straight into work, into the deep end. It worked.

What would you describe as the lesson of the film?

The dictum in the movie that speaks the loudest to me is that avoiding unhappiness is not the route to happiness. I think a lot of what we do in society today is avoid unhappiness. We do everything we can to stave off unhappiness. We self-medicate with consumer goods and “Eat this, watch this, wear this.” All these things that people think will make them happy and they don’t. They’re all quick fixes. They’re all the same as alcohol or drugs. They stave it off for a little bit, but it’s a temporary thing.

As an actor and a human being, what brings you happiness?

Reaching middle age and understanding the universe a bit better, and since the birth of my daughter, I’ve managed to get things in perspective a bit more. It’s helped me to understand the universe and my place in it — what I am and what I’m for. All that stuff has been very key for me. It defined me and helped me to appreciate things. Because of that, I can enjoy other stuff. When I first got to Hollywood, I was doing "Mission Impossible 3" and I wasn’t personally in a particularly happy place. I wasn’t able to enjoy it that much. I was thinking, “I’m in a Hollywood movie. I’m gonna be in a film with Tom Cruise. It’s everything I ever wanted,” yet I’m essentially feeling awful. I wasn’t capable of enjoying myself because I wasn’t happy on a more important level. Not the kind of happiness that material success brings, but a personal happiness. That’s what you need to be happy elsewhere in life.

Have you ever felt burdened by the tremendous legacies of "Spaced" and the Edgar Wright trilogy? There’s such intense fan loyalty there.

Yeah absolutely. It’s a back catalog that defined me and that I’m very, very proud of. I hope that people will permit me to diversify and do different stuff. I’m really glad that’s there because it’s something that I’m incredibly proud of and will go back to. Edgar and I are already talking about our next film together, and Nick and I are always trying to figure out ways that we can work together because then we can hang out also. If when I leave this planet I’m only remembered for "Shaun of the Dead," I’ll be happy. It’s always important for us to never rest on our laurels, to always try and push things forward and do stuff that is important to us. I think "The World’s End" is the best of the three because it’s the most sophisticated. It should be, because we’re older and better filmmakers.

Hector And The Search For Happiness Movies Simon Pegg