We really must remember the epic failures of George W. Bush

The New York Times wants us to forget how we got here. The real problem is that Barack Obama stopped reminding us 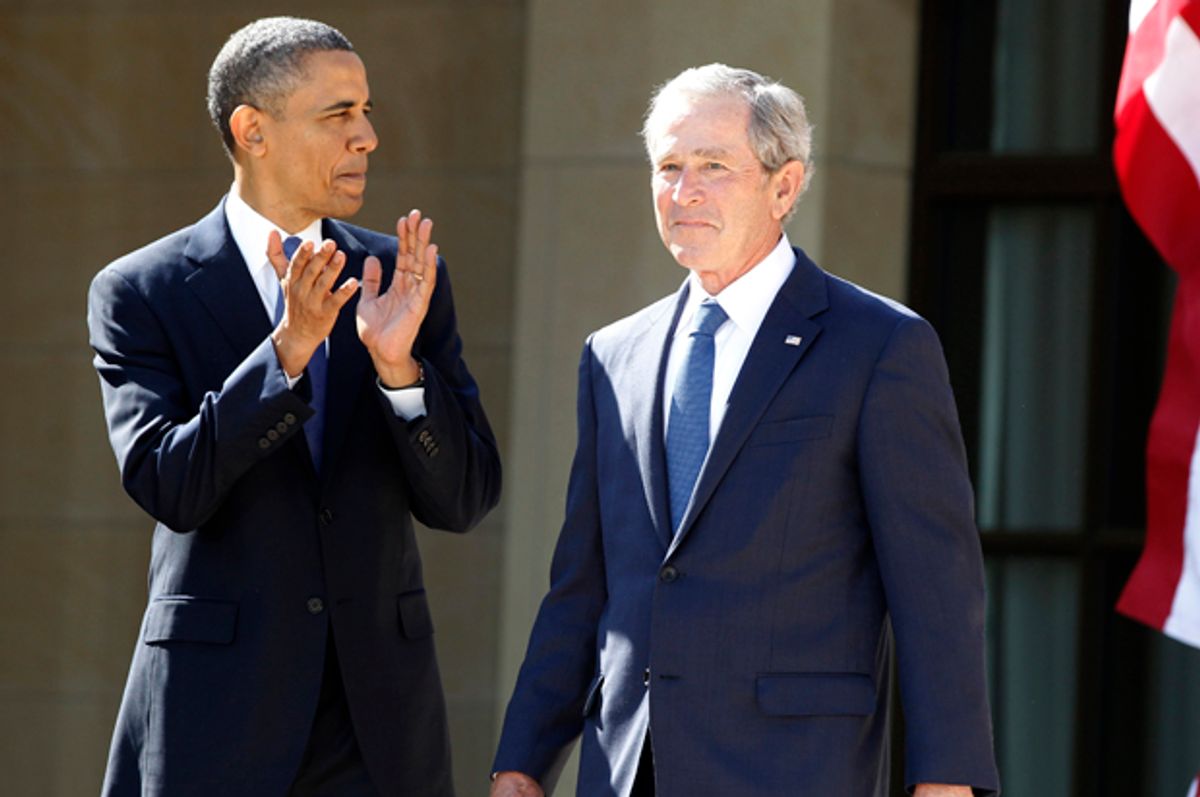 Frank Bruni is mad. The New York Times columnist thinks it’s high time that Obama’s defenders stopped blaming George W. Bush for all the problems in the world. Sure, Bush made a mess of things, but that was like six or seven whole years ago. “Whenever Barack Obama seems in danger of falling, do we have to hear that George W. Bush made the cliff?” Bruni complains. And to be honest, he’s sort of got a point — though not the one he thinks.

Here’s how Bruni puts it:

It happened with the economy. For the president’s staunchest defenders, legitimate questions about whether the stimulus was wisely crafted and whether Obamacare was rushed took a back seat to lamentations over the damage that his predecessor had done. Obama wasn’t perfect, but at least he wasn’t Bush.

But the real problem here was not that Obama supporters attacked Bush. It was that Obama himself did not.

The stimulus was poorly crafted — more than a third of it was composed of tax cuts (the ill-considered be-all and end-all of Bush’s earlier $170 billion stimulus program), which delivered far less bang for the buck than additional spending would — and a prime reason for that was Obama’s desire to partner with Republicans, rather than blaming them for the disaster he’d inherited from Bush. A fat lot of good that did him: He got zero votes from House Republicans in return.

An even worse problem was that the stimulus was too small — about half the size that it needed to be, as Paul Krugman noted at the time. But Obama was not about to blast Republicans like Susan Collins and Olympia Snowe for demanding that the slightly larger Democratic House-passed package be scaled back. He praised them for their bipartisanship! And why not? Even as the economy was worsening week by week before he took office, Obama was preoccupied with plans for a “fiscal responsibility summit” to strike a “grand bargain,” cutting Medicare and Social Security in return for modest tax increases — something totally at odds with how he had run for office.  There were multiple signals from the very start that Republicans weren’t going to cooperate on anything, but still Obama refused to place blame where it unmistakably belonged.

When it comes to Obamacare, Bruni’s sense of the problems involved is even further off the mark. Obamacare wasn’t rushed, it was nearly stalled to death by bad-faith Republican negotiations in the Senate.  Obamacare’s origins trace back to the Heritage Foundation, including the individual mandate. It was modeled more specifically on RomneyCare. The bill itself included hundreds of GOP proposals, and Obama bailed on the key Democratic proposal, the public option, falsely claiming he’d never campaigned on it.  There was absolutely nothing of a partisan rush job about it.

Nothing about healthcare reform had much of anything to do with Bush, of course. But that’s no reason to let Bruni’s myths go unrefuted. More to the point, it underscores the broader problem with Obama: He repeatedly bends over backward searching for “common ground” with Republicans, only to get the rug pulled out from under him. Once again, it’s not that Obama’s supporters criticize Republicans too much; it’s that Obama himself criticizes them far too little.

Of course, what’s got Bruni really steamed at this point isn’t domestic policy:

And with the Middle East, those defenders sometimes turn Bush’s epic mistakes into Obama’s hall pass. Perhaps he hasn’t figured out what’s right, but he isn’t guilty of the original wrong, which is constantly being litigated anew, as if a fresh verdict on the events of 2003 could alter the challenges and stakes of 2014.

On Tuesday there was another spasm of this. As Congress debated the escalation of airstrikes against Islamic extremists, Rep. Lloyd Doggett, D-Texas, digressed to inveigh against “the wholly unnecessary Bush-Cheney invasion of Iraq,” a bell that was rung 111/2 years ago and can’t be un-rung now.

While it’s true that we can’t undo Bush’s mistakes, that hardly means it’s foolish to keep them in mind. It would be foolish to forget them, after the terrible price we’ve paid -- and at the same time when the architects of that disaster are urging another mission in the Middle East to "destroy" ISIS.

And yet, as with domestic policy, Obama’s most significant mistake has been his reluctance to break sharply with previous Republican policy, call out their failures, and hold them responsible.  War crimes have not even been investigated, much less punished — only those who sought to expose them have been prosecuted. Yet, holding our own accountable for their misdeeds would work wonders for regaining trust throughout the world.

Obama dropped the “war on terror” language, but retained the underlying framework of a multi-continent “long war” lasting generations, if not forever — as has only just now become obvious to some. Yet, that war is largely self-sustaining. The longer it continues, the more casualties it claims, the more potential combatants there will be.

Obama closed down the Iraq War on virtually the same terms that Bush had come to, and he kept much of Bush’s national security team in place, most prominently his secretary of defense. He significantly increased and extended the war in Afghanistan, for reasons that remain obscure to this day.  While he made a significant gesture of policy change with his Cairo speech in 2009, his failure to follow through has left the Arab world more distrustful of us than ever — and with good reason.

But merely going through the litany of mistakes repeated only gets us so far. To really see what’s wrong with Bruni’s complaint, we have to get a clear view of what’s wrong with U.S. foreign policy, not piece-by-piece, but as a comprehensive whole.

Eventually, Bruni descended to the point of babbling:

The IRS scandal was not as bad as Watergate….

The bungled rollout of Obamacare was not as bad as the botched response to Katrina.

It’s apples and hurricanes, but they’re put in the same basket, in a manner that recalls a child trying to evade punishment by ratting out a sibling for something worse.

For the record, it was Republicans — led by Charles Krauthammer — who claimed that the IRS scandal was worse than Watergate, and every time Obama so much as sneezes, we’re told that it’s his Katrina.  It’s not just Obama’s supporters who call bullshit on this, and there’s nothing childish in doing so.  But it does distract from the real grown-up work at hand, which, among other things, is to find our way again after decades of being our own worst enemies in the Muslim world.

One example: U.S. meddling in the Middle East includes the overthrow of the Mosaddegh government in Iran in 1953. Then, as now, we were only thinking of short-term problems, as they appeared to us. Yet, the reason why Iran is such a thorn in our side today is a direct result of having overthrown Mosaddegh, the kind of leader we would gladly pay a king’s ransom to see come to power today.

Few Americans have any idea of who Mosaddegh was. We have no inkling of why our relationship with Iran is so troubled. And because we know nothing, some of us are easily convinced Iran’s hostility toward us is irrational, or else is because they are evil.

Yet, these are simply reflections of our own ignorance, and our ignorance is the most dangerous enemy we face. The bravest thing we can do is face up to that enemy, and admit that we have a lot we need to learn. We are so used to telling other people what to do. We’re the know-it-alls. No one exemplified that better than Bush/Cheney did. And that’s precisely what’s most wrong with us today. Not with Obama. With us.