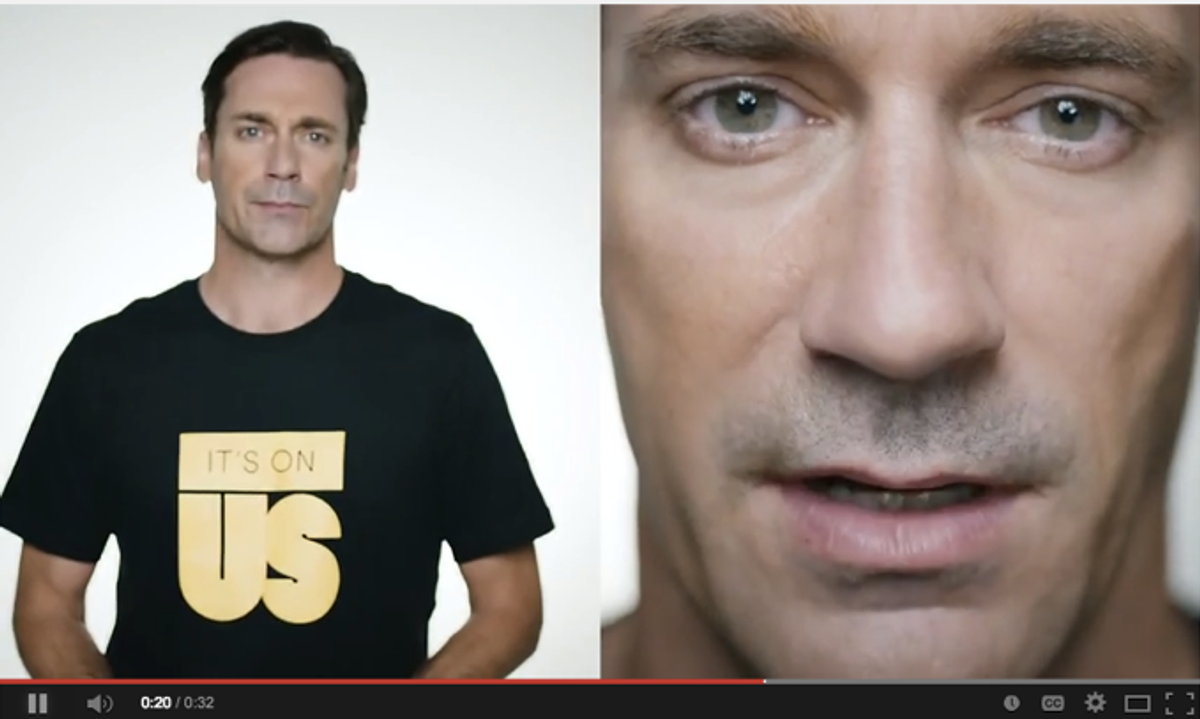 The White House is making men the focus of its latest initiative to address sexual violence on college campuses. "It's On Us," which launched Friday morning, aims to "fundamentally shift the way we think about sexual assault, by inspiring everyone to see it as their responsibility to do something, big or small, to prevent it," according to a fact sheet on the campaign.

And by "inspiring everyone," the White House seems to mean educating men. This is all too often the piece that gets left out when we talk about violence prevention, but it's one the Obama administration has taken on in pretty blunt terms. I mean, Vice President Joe Biden sounds straight up Riot Grrrl when he talks about victim-blaming. "I can’t say often enough it doesn’t matter what coat she was wearing, whether she drank too much, whether it was in the back of a car, in her room, on the street, it does not matter," he said in April. "It does not matter if she initially said yes and changed her mind and said no. No means no, wherever it is stated."

And just this month, Biden made the same point about domestic violence:

It's never, never, never the woman's fault. No man has a right to raise a hand to a woman. No means no. [...] The one regret I have is we call it domestic violence as if it's a domesticated cat. It is the most vicious form of violence there is, because not only the physical scars are left, the psychological scars that are left. This whole culture for so long has put the onus on the woman. What were you wearing? What did you say? What did you do to provoke? That is never the appropriate question.

Someone get this man a Huggy Bear T-shirt already.

The initiative, which is primarily focused on bystander education among men, has celebrity partners like Kerry Washington, Jon Hamm, QuestLove and Connie Britton, who are all featured in a PSA on how to identify dangerous situations and intervene safely.

(Per celebrity PSA usual, this means looking very serious and repeating the campaign slogan while staring directly into the camera):

Which is good, of course. It's good to get the message out that men and boys have a responsibility to educate themselves and other men about healthy sexuality and preventing sexual assault. And this messaging has been entirely shaped by the White House's engagement with student activists, who have been driving this movement forward.

The structural reforms that are being rolled out as part of this effort are just as crucial, and how well schools change their policies regarding sexual assault will be the difference between a victim finding justice or schools letting perpetrators slide. In addition to the Friday campaign launch, the Task Force also released new best practice documents to shape how schools handle sexual assault cases. The documents aim to strengthen the role of Title IX coordinators, bolster victim support services and shape sexual misconduct policies. There's also a funding boost -- $6 million to 18 colleges, according to the fact sheet -- "to develop comprehensive campus sexual assault prevention and response programs." The Task Force also intends to implement its recommendations in K-12 schools.

The overall message, according to one administration official who spoke to the Washington Post, is that sexual assault "is not only a crime perpetrated against a victim, but it’s a cultural problem in which we all have a role to play."