Barack Obama's worst defeat: How the president defined dovishness down 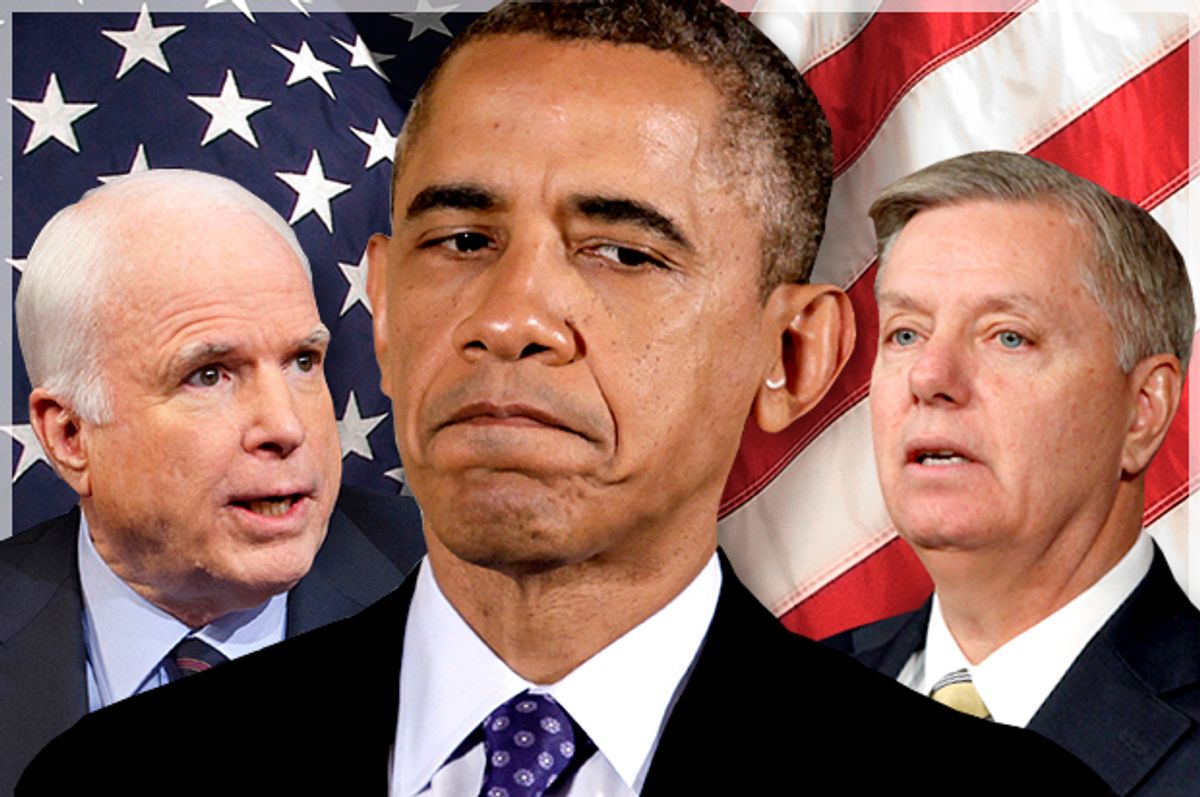 During his first presidential campaign, Barack Obama promised so much — and his supporters’ expectations were so unrealistic — that it can sometimes feel pat to note the many ways the Obama presidency has fallen short of its lofty expectations. Every politician over-promises, after all; and anyone swept up by a presidential campaign as idealistic as Obama’s in 2008 is bound to find themselves ultimately disappointed. But even if the trajectory of the president’s career is familiar, his first presidential campaign was so uniquely romantic, so willing to describe voting for Obama with the moralistic language of national self-redemption, that the consequences of his failure are not.

To get a sense of how Obama’s failures will reverberate beyond his time in office, look at the debate over the looming war on ISIS (aka ISIL), the Islamic extremist group that has established dominion over a large chunk of war-ravaged Syria and tottering Iraq, slaughtering and brutalizing most everyone it can in the process. Despite being widely perceived as “reluctant” to launch yet another combat operation in the Middle East, President Obama — who was voted into office in large part due to his perceived interest in dialing back his predecessor’s war on terror — announced he would be initiating a multinational and multipronged campaign to “degrade and destroy” the group. Having thrown its lot in with those who’d describe ISIS as the biggest threat since Saddam Hussein’s weapons of mass destruction, the administration has spent the time since trying to keep the military from forcing it to send ground forces to Iraq if airstrikes on ISIS don’t do the trick.

Considering neither the American people nor the nominal leadership of Iraq want American soldiers to return to the country, that’s a worthwhile goal. I certainly hope in the event a U.S. pilot is shot down that the president channels Reagan in Beirut rather than Johnson in Saigon. But before we get too excited about the White House’s modest attempts to slow the rush to full-scale war, let’s take a moment to reflect on an unpleasant reality: During the first major test of his ability to calm American society and arrest the momentum of another national episode of Islamist-inspired hysteria, the best Obama’s been able to do, thus far, is resist the insane idea of deploying ground-level troops. For a guy who campaigned on — and as recently as last year was still talking about — ending the U.S.’s “perpetual wartime footing,” redefining dovishness as little more than an aversion to “boots on the ground” is bitterly ironic.

If President Obama actually believed in his own rhetoric and strategy, of course, the story would be different. Obama has long maintained that he’s no pacifist, even going so far as to devote his speech in acceptance of a wildly premature Nobel Peace Prize to the virtues of humanitarian intervention (previously known as war). If he truly considered ISIS a problem from hell, and he truly agreed with neoconservatives like Sen. Lindsey Graham and Sen. John McCain, who describe the group as an “existential threat” that could have us “all get killed,” I’d be much more sympathetic. I’d still side with the vast majority of experts who say these claims are absurd, mind you; but I’d at least believe Obama’s motivations were noble, however misguided. It’s possible to be wrong for the right reasons.

Thing is, precious little that Obama’s said in public, or in off-the-record conversations with sympathetic journalists, would give a close observer reason to believe his decision on ISIS is any more principled than his recent one on immigration. In a New York Times report on an off-record meeting the president had with a select few media members before his ISIS speech, participants say Obama discussed the “fascinating” experience of being in the midst of rush to war and offered a few “doth protest too much”-type assurances that he would not let the war fever’s “momentum” affect his decisions. Moments before going in front of millions of Americans to describe his plan to “degrade and destroy” ISIS, the president, according to those at the meeting, described the Islamic group as “a problem for the next president, and probably the one after that.”

And in a testament to Obama’s enduring ability to be “a blank screen on which people of vastly different political stripes project their own views,” as he once put it, some who joined the secret meeting later described Obama’s thinking on ISIS as “ambivalent,” while others said he “appeared at peace.”

Viewed in conjunction with the subtle recognition during his speech that American intelligence agencies “have not yet detected specific plotting against our homeland,” the president’s supposed internal “peace” takes on an ugly, cynical hue. Almost six years removed from vows to end “dumb” wars and push back against the hysterical and irresponsible politico-media culture that makes them more likely, Barack Obama has seemingly now resigned himself to accept that George W. Bush’s war on terror will never end — certainly not during his presidency, and probably not during the next two after, either. For a generation of voters who believed Obama when he said the power to constrain American militarism was within their grasp, the president’s near-total failure will bring anything but peace.