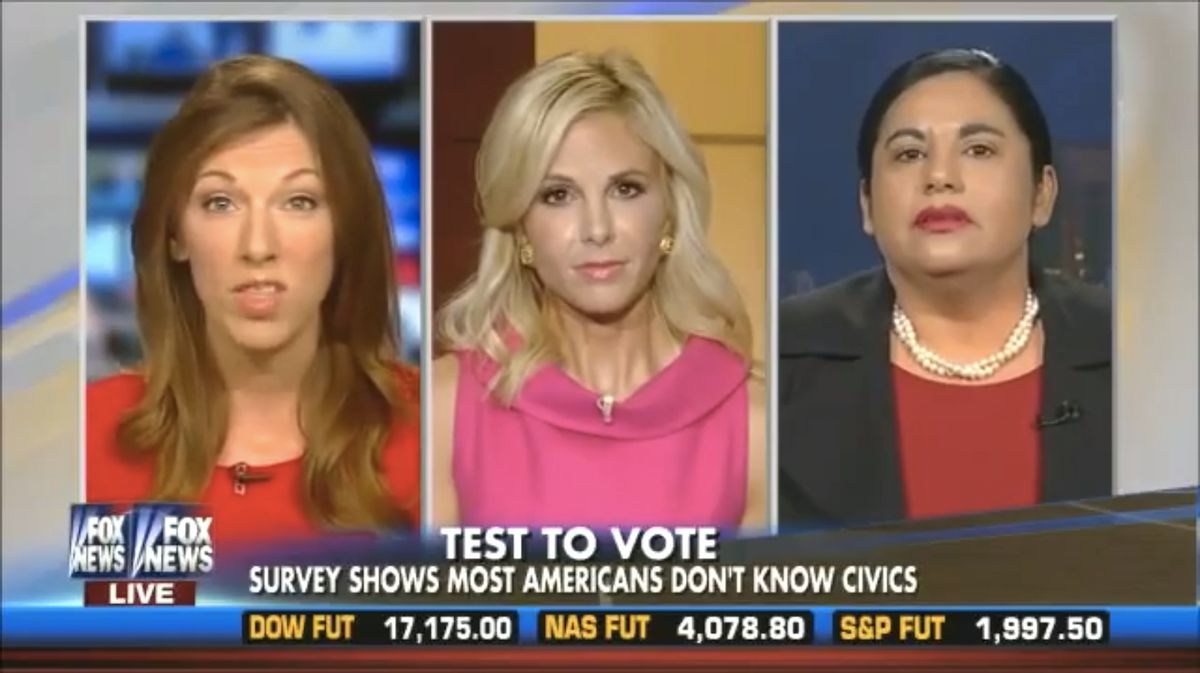 On Monday morning's edition of Fox & Friend's Elisabeth Hasselbeck hosted a discussion about the merits of making voters pass citizenship tests before they could graduate from high school or exercise their civil right to vote.

Utah Civics Education Initiative co-chair Lorena Riffo-Jensen, an immigrant from Chile, advocated getting children involved in civics: "I think, personally, that anything you can do to ensure that our young people, our families are involved in civics, learning the history of our country is a positive. And furthermore, how can you go into planning what the generation will do in the future if you're not prepared and understanding where we have been? ... You cannot be engaged without having the full knowledge and understanding of your nation."

Hasselbeck responded, "It's a more meaningful measure when you vote perhaps too."

After an extremely polite conversation about why more civics education is needed (of course it is--a total overhaul of the educational system is needed), Hasselbeck invited viewers to weigh in on the conversation. Should voters have to pass a citizenship test before they can cast their ballot? After watching this segment, everyone would probably say yes. What could possibly be the problem with more education and smarter voters?

The problem is one that Fox completely omitted, an argumentative tactic that has served the network well. There actually has been such a test, a so-called literacy test, which was eventually banned by the 1965 Voting Rights Act. The test was theoretically to be given to people of all races, but was disproportionately given to black potential voters in order to disenfranchise them. A few of the tests are available, and the wording of the questions are deliberately confusing and obtuse in such a way that even highly educated people would not necessarily do well.

Not as appealing now, right?