Rory and Lorelai's rosy vision of motherhood: How "Gilmore Girls" haunted me

My relationship with my mom fell apart; theirs flourished. And yet somehow I couldn't stop watching 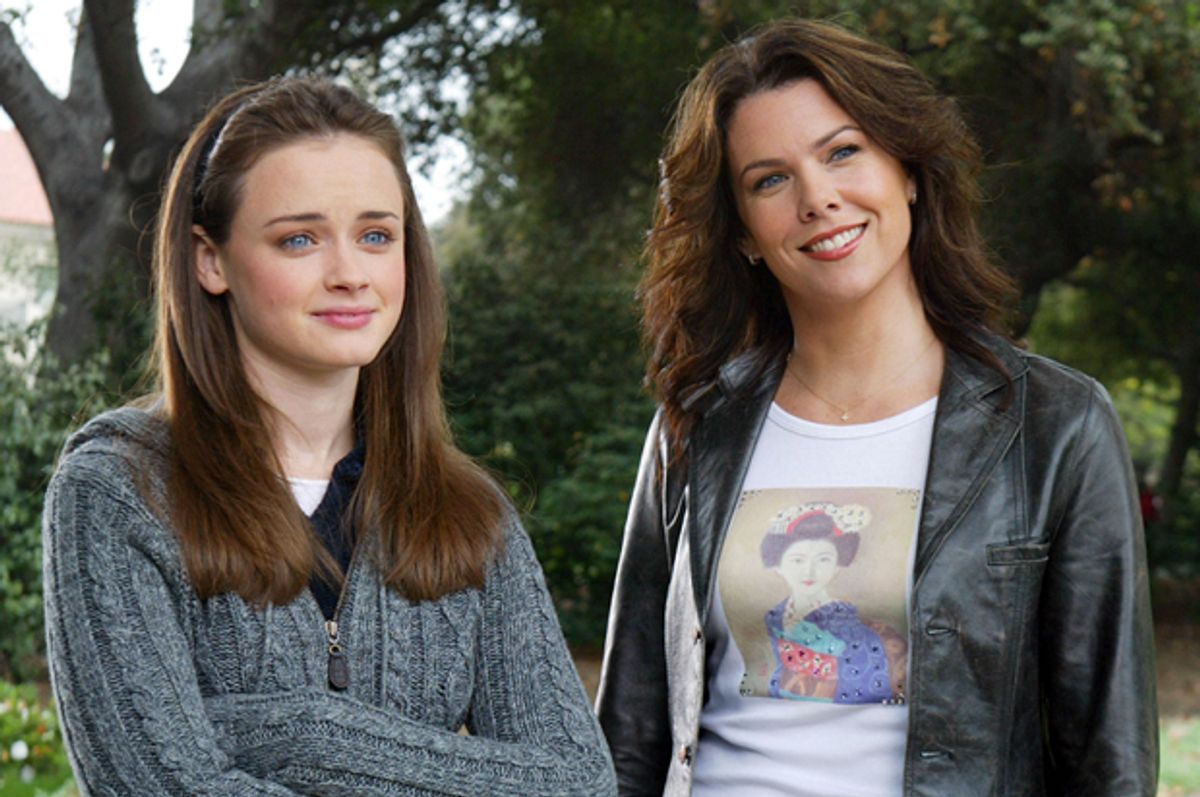 Alexis Bledel and Lauren Graham in "Gilmore Girls" (The WB)
--

As of Oct. 1, Netflix will start streaming all seven seasons of “Gilmore Girls.” I’m prepared to spend a good chunk of October with my laptop propped on top of my fridge, binge-watching Stars Hollow goings-on while I overcook chicken quesadillas. It promises to be a different viewing experience entirely than the standing date I held for most of early teenagedom with ABC Family “Gilmore Girls” reruns, 5 p.m. every weekday, in the living room of the house where I grew up. The changes are technological, of course, but also geographical, temporal — I’ve moved; I’ve gotten older. And in these intervening years, I’ve also stopped speaking to my mother.

As a high schooler, I was really feeling Rory Gilmore. We had plenty in common: Like me, Rory was a voracious reader and movie-watcher as in love with the highbrow stuff as she was with cult and camp. We were both trying our luck at the thoroughly mixed bag of white teen girlhood in a small Connecticut town. We shared college ambitions and the tendency to drop "Heathers" references.

I wasn’t quite as quick, as driven, as masterfully attuned to the pop cultural machine as Rory, but there was enough there for me to identify with her, week after week, despite all that made us different. I didn’t have wealthy grandparents to put me through private school, nor would I ever be able to stick out more than a date or two with someone as softly and uninspiringly Wonderbread as Dean. But it was the show’s most significant relationship at which I lost Rory entirely.

"Gilmore Girls," as the title suggests, is above all about Rory and her mother, Lorelai. The show thematically ebbs and flows with the tides of Rory’s principal boyfriends (sweet, hopelessly boring Dean; smart, cool-guy dirtbag Jesse; rich, cool-guy dirtbag Logan), just as it’s anchored by flanneled and unflappable Luke behind the counter at his diner, and eventually in Lorelai’s arms. But all the romantic relationships — from the one-timers to the season-spanning — serve as relatively extraneous subplots to the true love story of mother and daughter.

I watched from my living room floor as Lorelai and Rory crawled into bed together with a favorite film and Chinese takeout. The shared bed is an old-reliable of "Gilmore Girls" motifs; most often, it was Lorelai wrangling her way into Rory’s. I watched them talk about school and work and the town where they lived, late into the night. I watched them grapple with heartache in each other's arms.

While watching, my own mother would be upstairs in her bed, alone, which was where she could most frequently be found any time after it hit late afternoon. I hadn’t crawled into her bed, or she into mine, since I was little kid, ravaged by a young chronic worrier’s nightmares.

Lorelai and Rory stroked each other’s hair, wrestled, high-fived; these casual, easy expressions of intimacy weren’t the sorts of things I recognized when it came to my mother’s body in relation to my own. This was how my mother touched me, or almost touched me: with a hand shoved in front of my face to keep me quiet during family therapy sessions; with five fingers getting themselves tangled in my crazy-colored hair, and tugging. For the most part, she stuck to interacting with me from a safer, verbal distance: threatening, in order to avoid child protective services, to run away with my brothers to South America and leave me to fend for myself; questioning the whorishness of a skirt on my way out the door to school.

This may seem like a silly, extreme comparison to draw for those "Gilmore Girls" critics who argue that the Lorelai and Rory relationship is unrealistic, more buddy-buddy than mom-child. They’d probably claim Lorelai sets a standard for mothers that no one, let alone a mother like mine, could possibly hope to meet: She’s too cool, too pretty, too lax; all fluff and bravado without enough of a firm, guiding hand.

(If a mother and daughter being best friends comes across as unrealistic, perhaps it’s because our wider cultural script reads that way. Imagine a television landscape similar in tone to one in which a mother and daughter toss a football, wrestle and crack open beers, all while Mom encourages kid to go forth and get laid. Sounds like best-friendly activities, right?)

Lorelai was definitely Not Like Other Moms, or at least not like the others on television. She wasn’t wholesome, sexless, house-ridden, dull; nor was she half-nightmare, half-absentee. She indulged in occasional, weird flings with Rory’s quasi-deadbeat dad, with whom she’d had Rory when they were still teenagers; she had a well-developed relationship with her best friend and business partner (played by pre-"Bridesmaids" Melissa McCarthy); she wore tight jeans. But what made her seem the most bizarre when shuffled among the druggy, sex-fiend fuck-up TV moms and the sweet, cautionary,  archetypically aproned TV moms was that Lorelai treated Rory with the respect of an equal. This — more so than the takeout, the bed-sharing, the jaunty rapid-fire dialogue — this was what I loved, and envied, most.

Rory had her shit together. She got great grades and did laundry. With her best friend, Lane, she talked about music and literature as often as she talked about boys. Her feet were planted firmly on the ground. She didn’t seem to need anything close to a helicopter parent.

But because no teenager is completely autonomous, and because every teenager is at least a little bit of an idiot, Rory wasn’t without total need of guidance. Sleeping with a married ex-boyfriend, for instance, was probably not the best idea. She fucked up sometimes — as did Lorelai. As do humans. But the show didn’t hold too much sense of the weighty generational divide between all-knowing adults and clueless teens. Teenagers like to think they know everything, when, of course, they don’t — but they do know a thing or two, especially ambitious, kind, curious ones like Rory. She was afforded, by her mother, a fully realized sense of herself. And vice versa.

I was never really capable of thinking about my mother as a person. She was someone from whom I fruitlessly sought approval at best, my flat-out adversary at worst — an annoyance, an obstacle; never a person. And that’s unfair of me. If I owe her anything, it’s the recognition of her basic humanity, especially now that I’m far enough away from our days of living tangential lives to appreciate that there clearly must be more to her than mothering.

There is more to Lorelai, as Rory well knows, than mothering. And her motherhood itself is, a lot of the time, of the vegging-out-with-your-best-friend variety. As a teenager, that was something I obviously found extraordinarily appealing. But now, as a childless 20-something, what the hell do I know about appropriate boundaries and successful parenting tactics? An early-2000s dramedy shouldn’t purport to be pedaling parenting advice — and so it didn’t, does not. "Gilmore Girls" was a fun, sentimental piece of serialized fiction. I found value in it nonetheless.

Unlike when Rory and Lorelai temporarily stop speaking after Rory’s stealing-a-boat-and-dropping-out-of-Yale fiasco, I’m not expecting my estrangement from my mother, now a couple years in the running, to end anytime soon. And that’s a good, happy, healthy thing for me. When "Gilmore Girls" starts its Netflix stream next month and I kick off my marathon, maybe I won’t again experience the cognitive dissonance of feeling at once jealous of a relationship I couldn’t have, and hopeful that such a relationship is perhaps possible for someone, somewhere. I can appreciate the characters, and the world into which they were written—nothing more (well, maybe a bit more), and nothing less.

Shannon Keating is a writer living in Brooklyn. Read more from her at about.me/shannonkeating and follow her @__keating.