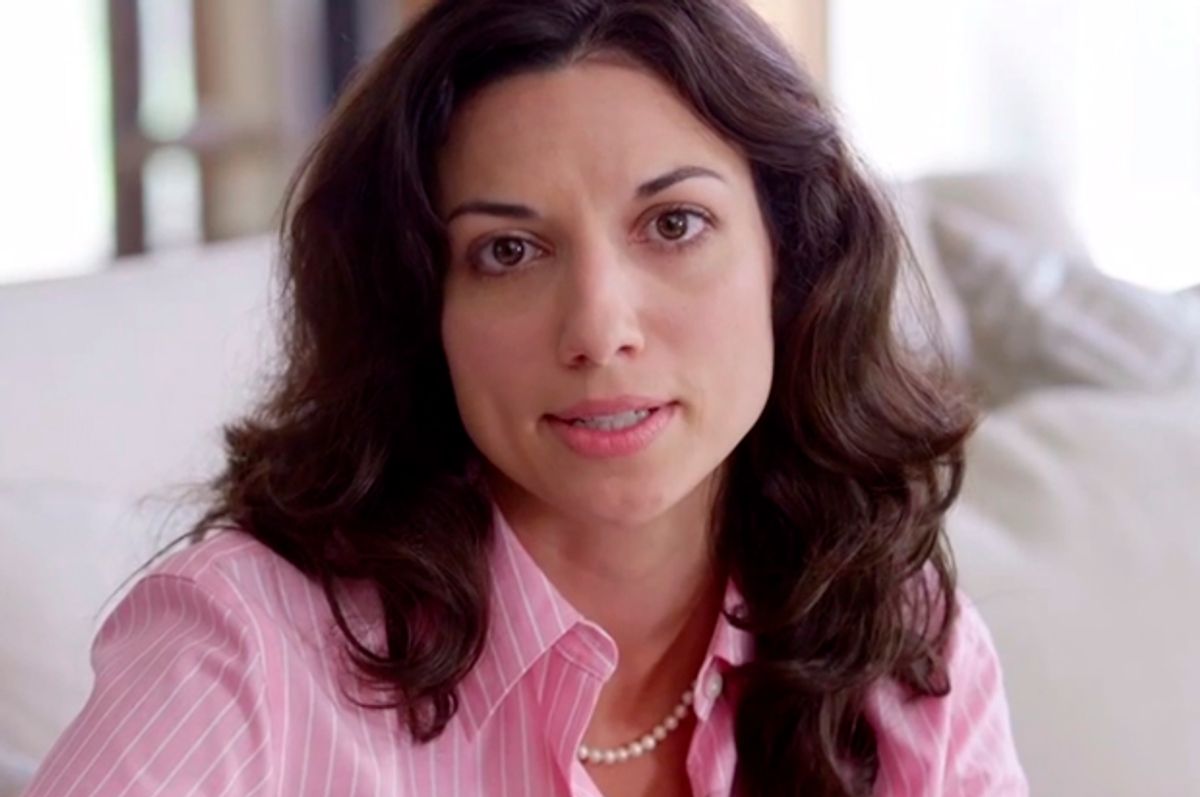 Republicans are relieved that so far, there’s no Todd Akin in the 2014 election cycle. Yet even without a clueless GOP candidate blathering about “legitimate rape,” the party still trails Democrats among women voters, even in races that feature female GOP candidates, and it could cost them a chance to take back the Senate. So Americans for Shared Prosperity is riding to the rescue with an ad so condescending to women it might have been made by Todd Akin. It rivals that "Creepy Uncle Sam" ad that backfired on the Koch brothers' Generation Opportunity.

In the 60-second spot, which ran on the Sunday shows as well as reportedly in Colorado and North Carolina, a lovely, latte-skinned young woman in a pink shirt and pearls is sitting on her white sofa, complaining about a man she met online: "In 2008, I fell in love. His online profile made him seem so perfect. Smart, handsome, charming, articulate." We see her MacBook screen, and there he is: the cad she calls “Barack,” President Obama.

Yes, admaker Rick Wilson and Americans for Shared Prosperity believe the way to convince women to vote for Republicans is to compare the president to a bad boyfriend. Obviously they think we’re idiots who put romance before reason, even in politics.

Naturally it diminishes Obama, too: Our first black president is just another pair of pants, a smooth-talking liar who let us down. But hell, he is kind of cute, which is obviously why he won the women’s vote over John McCain and Mitt Romney.

The ad is clearly targeting the most loyal Democratic constituency: College-educated and unmarried women voters who may or may not be white. (Barack’s soon-to-be-ex-girlfriend could be Latina.) Creepily, the language makes it sound like not merely an unhappy relationship but an abusive one. He’s spying on her emails and text messages -- an NSA reference, I guess – and she only “stuck with him because he promised he'd be better."

But don’t worry: They try to get some politics in there, too. "He thinks the only thing I care about is free birth control, but he won't even let me keep my own doctor," the fed-up woman tells us.

That’s another fail: Republicans deny it, but in fact women voters care a lot about “free birth control.” An October 2012 poll found that women backed Obama’s contraception policies 56-35 percent; USA Today called it “the president's strongest issue by far.” A third of women said the issue was “extremely important” in their vote, twice the number of men.  And two-thirds of women voters opposed Hobby Lobby’s attempt to evade the contraception mandate, though the Supreme Court sided with the corporation’s right wing Christian owners.

Of course, Barack is not on the ballot, so what's the point of the ad? "I know I'm stuck with Barack for two more years. I get that. But I'm not stuck with his friends." So she can break up with North Carolina's Kay Hagan and Colorado's Mark Udall, among other Obama "friends" -- get it?

Maybe the worst thing about the ad is that its sponsors are utterly clueless about how demeaning it is. John Jordan, the wealthy California winery owner who runs Americans for Shared Prosperity, told Politico that the group’s goal is "to communicate with women voters in a way that outside groups and campaigns haven't." Well, they’ve certainly accomplished that. But then he went on. "The purpose of this is to treat women voters more like adults than either Democrats or Republicans have."

Jordan is specifically concerned that Republicans are losing the women’s vote “even in states where the nominee is a woman — for example, Joni Ernst in Iowa, Monica Wehby in Oregon.”

He’s right about that. But let’s give the GOP credit for one way they’ve promoted women’s equality: Iowa’s Joni Ernst might actually be the Todd Akin of the 2014 cycle: a candidate who’s flubbing what looked like a strong chance for a GOP pickup with extremist statements about impeachment, nullification and how Iowans deserve a lower minimum wage than the proposed $10.10 federal level.

Now that the ad has aired, and reaction has been almost universally scathing in the media (beyond the confines of sad Erick Erickson's deeply sexist RedState.com), have any of its backers had second thoughts? It doesn’t seem like it: On Sunday, admaker Rick Wilson tweeted:

Give Wilson credit for one thing: The ad is much more creative than Karl Rove’s dreary Crossroads spot featuring four dull women, three white and one possibly Latina, complaining about Colorado Sen. Mark Udall in a fancy suburban kitchen. Maybe Wilson can tweak that ad to show the four women discovering they were all dating Udall, and breaking up with him together.

And they wonder why they lose the women's vote?