Groping women is not a "prank"

YouTuber Sam Pepper is slammed for a gross stunt 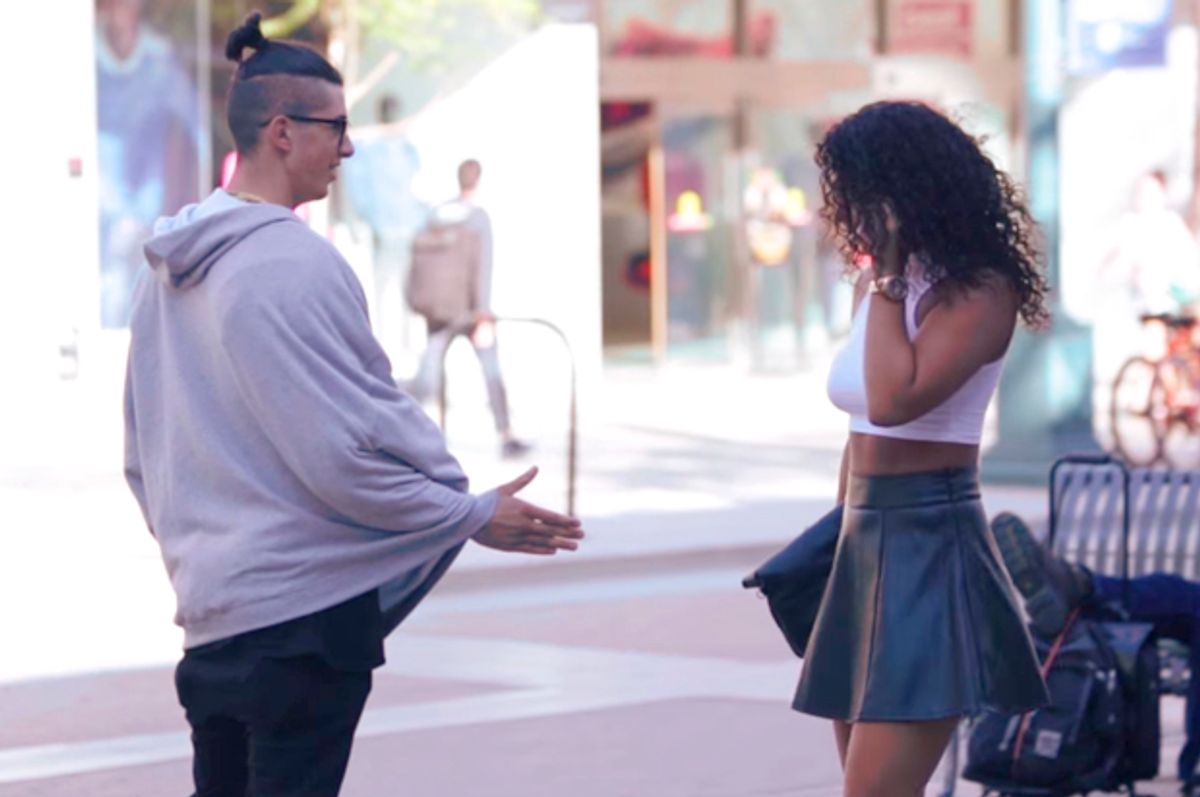 Pepper, a former "Big Brother" contestant, is known for his self-described "pranks" and "social experiments," which include approaching strange women, talking to them and then calling them whores, as well as "picking up girls" with his pal Logan Paul by literally lassoing them as they walk down the street. But over the weekend, Pepper found himself on the receiving end of some well-earned Internet disgust after posting a "Fake Hand Ass Pinch Prank" on YouTube and declaring on Twitter, "RETWEET IF YOU LOVE BOOTY AS MUCH AS ME!"

In the excruciatingly pleased-with-himself clip, Pepper, who appears to have his hands in the pockets of his hoodie, approaches attractive young women to ask directions and grabs their bottoms. Then he laughs and laughs at his naughtiness. The video currently has well over a million views. On Sunday, Pepper, in a perhaps very conscious display of his concern for The Ladies, tweeted that he "Just found 2 poor fans who's dad feel asleep & left them stuck in Vegas on their own. Stayed with them till 4am need to sleep now. Good luck… I asked the hotel to help, and they just said 'go sit on that sit'. Where drunk 40 year olds can just talk to them all night. :( poor girls." [sic] Yes, talking "drunk 40 year olds" are the real menace, Mr. Handsy.

The gross dude is a particular type of Internet star – see also young Nash Grier, who will happily share his standards for what makes a girl "a whore" and who has been known to call HIV a "fag" disease. But fortunately, not everybody's a creep. And Pepper's latest antics have attracted an articulate amount of commentary on why it's not cool to accost women and call it a funny "prank."

In an open letter posted this weekend, YouTube sex educator Laci Green broke it down perfectly, explaining, "It is very disturbing that we live in a world where the violation of women and girls’ bodies is not only funny, but profitable, and can garner considerable notoriety and views on YouTube …. Please stop violating women and making them uncomfortable on the street for views. Please stop physically restraining them and pressuring them to be sexual when they are uncomfortable. Please show some respect for women’s right to their own bodies. While it may seem like harmless fun, a simple prank, or a 'social experiment,' these videos encourage millions of young men and women to see this violation as a normal way to interact with women." It's co-signed by several other Internet stars, including Tyler Oakley, Meghan Tonjes, Wil Wheaton, Liam Dryden and Hank and John Green. To whom I say, thank you. The #ReportSamPepper hashtag has also been trending, because maybe YouTube shouldn't be encouraging its community to fondle strange women?

What's demoralizing about Pepper's videos – not just the butt grab one but others as well – is how accommodating the women he targets are. Even the woman who tells him directly in the new video, "I don't like that," does so with a smile on her face, and accepts it when he puts his arm around her. These women shake his hand and hug him – after they have flinched at his grabs. Part of that may be his selective editing; if there were women who chewed him out for being a d-bag, they are not part of his narrative. But I think another part of it is that this is what women are trained to do, for our own safety. Guy accosts you on the street? Guy treats your butt like his punch line? Just smile, nod, give him a hug if he wants a hug – so you can move along and get the hell away. I've done it myself, when I've been surprised and annoyed and flat-out scared. I've been less pleasant about it too, in my time, and said, "Don't touch me." I've been screamed at, followed, and once had a guy try to punch me in the face for it too.

That's why I honestly struggle with what to tell my daughters about how to handle it when these kinds of things inevitably happen to them. Mostly I try to encourage them to trust their instincts and to get out of an aggressive situation as quickly and quietly as possible. And you know what? That pisses me off. It pisses me off that guys like Pepper get to walk away laughing for real while the women they mess with are expected to offer a placating "It's okay that you did that" grin and a hug or even a full makeout session. It's not OK. I want it understood that when women put up with it, it's often not because they're enjoying it, it's because they're trying to deescalate a situation involving a male stranger who thinks he has a right to touch their bodies. And I want it stated and repeated that just because you "LIKE BOOTY" doesn't mean you're entitled to it.