A show about husbands with double lives has me hooked, and I'm not alone. Why do women watch this stuff? 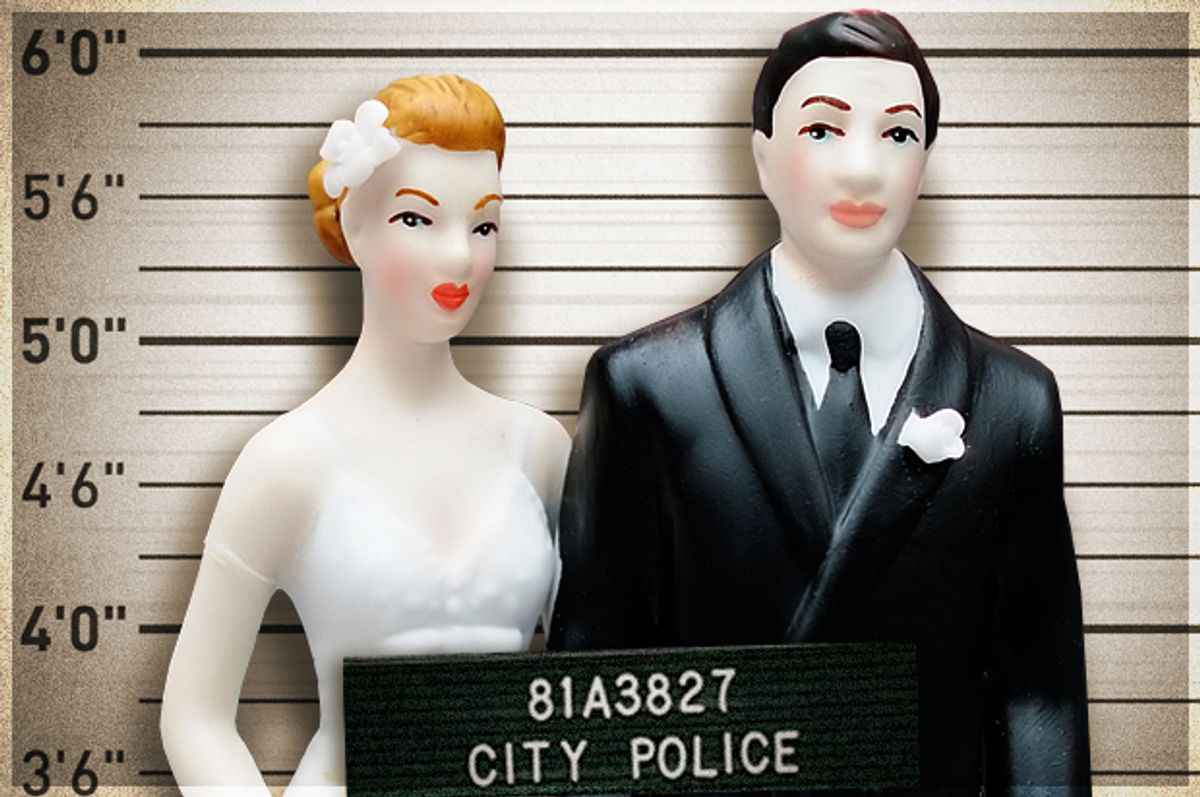 There's this show that I'm obsessed with called “Who the (Bleep) Did I Marry?” The opening credits begin with a shot of a traditional bride-and-groom cake-topper as a narrator intones, “When it comes to love and marriage, things aren’t always as they seem.” Cue the “Wedding March," followed by a dun-dun-dun and a close-up on a gun in the plastic groom's hand. Each documentary-style episode features a true tale of someone, almost always a woman, finding out that her spouse is living a double life. She thinks she’s met Prince Charming, but then he turns out to be a bank robber, a spy, a polygamist, a drug dealer, a serial rapist, et cetera.

Naturally, I watch it with my husband.

Sometimes it leads to him exclaiming things like, “What is wrong with men?!” Other times we give each other an exaggerated side-eye as if to imply, “Are you working for the Mexican cartel?” or “Maybe I have a secret second family.” It’s our favorite guilt-watch, next to “Bachelor in Paradise" (which leads us to side-eye each other as if to imply, "Do you wish I had his abs?" or "Are you aware those boobs are fake?"). Whenever we watch "Who the (Bleep)," as we've taken to calling it, it's at my urging. Part of this is my particular pathos. I’ve always found crime shows compelling. I used to watch “Rescue 9-1-1” as a kid, knowing full well that it was going to give me nightmares that sent me snuggling up next to Mom in the middle of the night. I am and always have been a worst-case-scenario-ist who likes to contemplate all of the many ways that things can go terribly wrong.

It also happens that a longtime friend recently revealed a shocking secret that completely challenged my powers of observation. (I SO WISH I COULD WRITE ABOUT IT, BUT I CAN'T.) Plus my mom died, leading to a fascination with the macabre and a penchant for asking my husband things like, “What if my face burned off in a fire?” And my dad, trying to reinvent his life, started promptly dating women who were very much unlike my mom, his wife of 35 happy years. Oh, and I got married. So I guess you could say that this show addresses a lot of questions that my unconscious is wrestling with following a series of reality-challenging events. Can you ever really be sure that you know a person? How do you survive the worst thing you ever imagined? What in the fuck is happily ever after? What if you get too comfortable and lose everything?

It’s not just me, though. Most recently, the show drew an average of 843,000 people for each premiere episode, and 72 percent of the audience is female. In what Investigation Discovery has dubbed its “Love Gone Wrong” programming block, “Who the (Bleep)” airs alongside “Dates From Hell,” a show in which “men and women” -- but mostly women, duh -- “share their personal stories of how something that started out as dinner and a movie quickly transformed into a terrifying tale.” Similar documentary-style shows on ID include “Happily Never After” (“It was the happiest day of the bride's life, but it was also her last”), “Fatal Vows” (“When marriages fail, divorce can turn ugly -- even, deadly”) and “Handsome Devils” (“You've met the man of your dreams. He's charming, funny, good looking- everything you've ever imagined. But what you don't know is that he will soon become your worst nightmare”).

Just to drive the point home, a few other titles: “Very Bad Men,” “Devil You Know,” “Scorned: Love Kills,” “Poisoned Passions” and “I’d Kill for You.” What is with these tales of "love gone wrong"? Why do they appeal so much to women in particular?

I gave "Who the (Bleep's)" executive producer Pamela Deutsch a call to find out. “I think there’s something relatable about these women telling their stories,” she said. You might think: Really, being married to a bank robber or mafioso is relatable? “For me, I find there are experiences in their stories that remind me of my past. We’ve all dated, we’ve all met Mr. Wrong,” she said. “We all have those nightmare dating stories where Mr. Perfect turns out to be a nightmare.” She adds, “Your husband might not be a Cuban spy, but he might be having an affair.” (My husband confirms that he isn't a Cuban spy and denies that he's having an affair.)

Viewers write in to tell the show's producers that they're "becoming familiar with some of the red flags," Deutsch says, like him “keeping the mail away from you or keeping his finances separate.” In that sense, the show serves as yet another cautionary tale for women. It's just more data to add to the list of rules for protecting yourself as a woman in the world -- you know, don't walk down dark alleys, and don't marry the guy who won't introduce you to his parents. There's a reason it's simply not as compelling a watch for my husband -- and it isn't just because he has more taste that I. In the world of "Who the (Bleep)," women face danger at every turn -- from the man sleeping in bed next to them to the man next door. Certainly criminals aren't as common in the world at large as they are on the show, but it does reveal the potential dangers of being female. So, yes, it's relatable and instructive.

But it occurs to me that there's more going on here. On a fundamental level, there is the vulnerability of intimacy and, somewhat paradoxically, the undeniable "otherness" of even a life partner. We may try so desperately to eliminate the divide between us, to know the person completely -- whether it be through sex, therapy or snooping in each other's email -- but it's always there. That's about as core an existential quandary as there is. You know the saying, "You're born alone and you die alone." (You see? There's that penchant for the macabre again.) Maybe your significant other has a secret porn stash, or maybe he's a serial killer -- who's to say!

Women in particular grow up hearing Disney-fied fairy tales about Cinderella and Snow White, stories that inevitably end when the relationship begins; "happily ever after" is just an ellipsis. These docu-drama stories begin at "happily ever after" and end with "once upon a time," as Jamey Hatley wrote in describing Roxane Gay's dark fairy tale "An Untamed State," in which a woman finds Prince Charming and then faces challenges and tumult. In so many ways, marriage is no longer a "happily ever after." The divorce rate may be going down, but the illusion has already been shattered. Marriage is also increasingly delayed and even avoided altogether. And in our modern world, it is perhaps harder than ever to pretend that a husband actually makes a woman any safer.

Of course, that only means that these "love gone wrong" stories are truer to what fairy tales used to be, which is to say: super-fucking-dark and twisted. Cannibalism, decapitation, incest? All within the purview of fairy tales. In the original "Sleeping Beauty," the princess was raped in her sleep by a king. Only, these real-life TV yarns inevitably end with a woman who survives and overcomes the wrongdoing of her husband. As Deutsch puts it, "The bad guy gets caught or comes to justice, and I think that’s very satisfying." And, let's be honest, that might feel a bit like an unrealistic, escapist fantasy, depending on the news that week.

Editor's Picks Gender Love And Sex Marriage Sex Tv Who The (bleep) Did I Marry?