Let it rip! When fart jokes were comedy's last taboo

Shakespeare, Twain and Joyce made fart jokes. But for much of the 20th century, comics were forced to hold them in 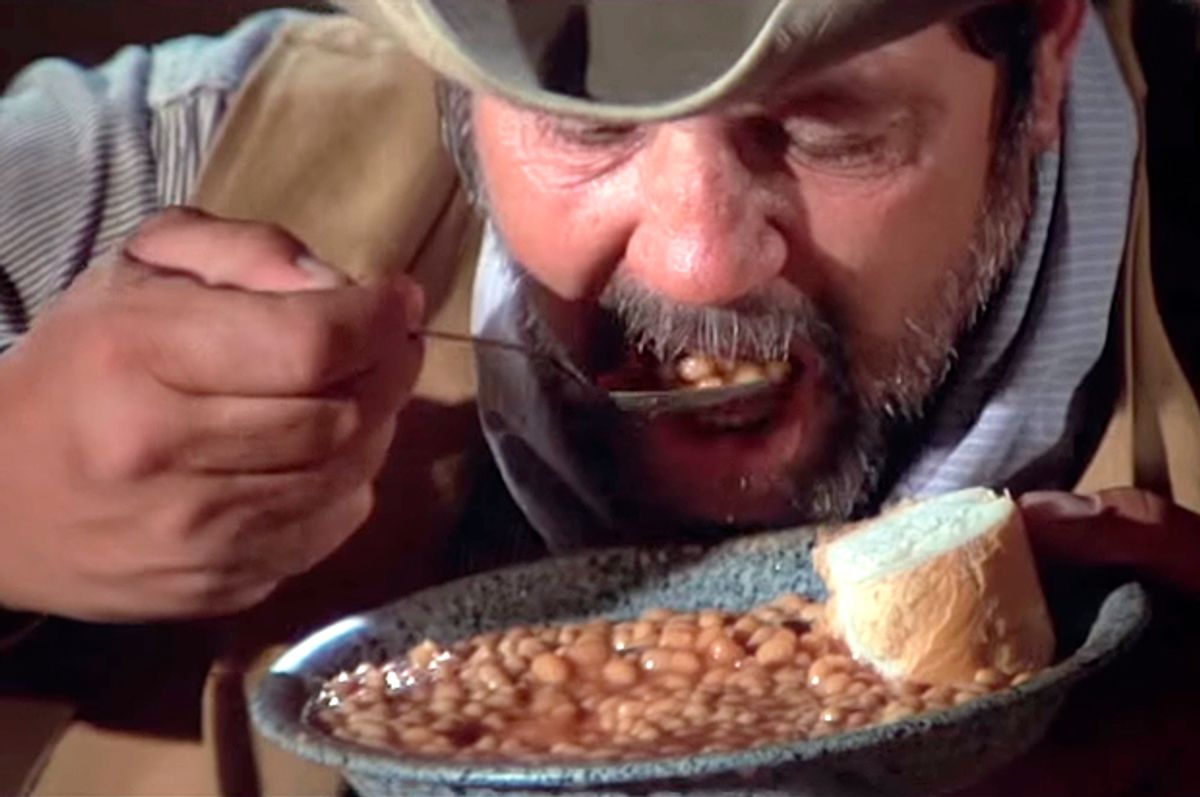 Confucius say, Man who fart in church must sit in his own pew.
— Old Joke

Of course, there’s always a big difference between what people joke about in private and what they do in print, on film, or on the air. This guide inevitably underrepresents the private off-the-record humor of the era it discusses. My mother, who grew up in a God-fearing Midwestern middle-class household in the 1940s, recalls from her childhood the still-familiar lines:

My mom also recalls such rhyming answers to the whodunit question as “He who smelt it dealt it” and “He who denied it supplied it.” So a well-behaved little girl in the 1940s was exposed to fart humor. And yet there’s not a whiff of it in the mainstream pop culture of the era: not on TV, not on radio, not in the movies, not in print. You have to look pretty hard to find any even in the less reputable venues of the era. Even Tijuana bibles that blithely show young Nancy performing fellatio on Sluggo, or Little Orphan Annie being sodomized by her dog Sandy, rarely challenged the taboo against farting.

It wasn’t always so. In the 1890s and 1900s, a French baker named Joseph Pujol wowed the Moulin rouge with his flatulence. His stage name was Le Petomane, and his act— which, in its heyday, would outgross Sarah Bernhardt—consisted of making all kinds of remarkable noises with his anus. As a child he’d discovered his freakish ability to suck water or air into his rectum, and long before he turned pro he was amusing fellow soldiers, during a hitch in the army, with his ability to take up water from a pan and squirt it several yards. Back in civilian life, he would amuse customers at his bakery by imitating musical instruments. At his peak, he and his amazing sphincter could play “La Marseillaise,” blow out a candle from across the room, imitate all kinds of barnyard animals, and bring down the house with his deafening rendition of the great San Francisco earthquake. Everybody wanted to hear him, from Sigmund Freud to the Prince of Wales.

Fart humor, then, goes in and out of fashion. It was surprisingly common in the eighteenth century, which for all its periwigs and minuets was much less frightened by bodily functions than the nineteenth and most of the twentieth. Swift, Sterne, Smollett, and even Pope wrote memorably on the subject, though Dr. Johnson wouldn’t touch it. Swift is thought to be the author of the 1722 essay “The Benefit of Farting Explain’d,” under the pseudonym of Don Fartinhando Puffindorst, Professor of Bumbast in the University of Craccow. In 1787, an anonymous “essay Upon Wind; With curious Anecdotes of Eminent Peteurs, Humbly Dedicated to the Lord chancellor,” painstakingly distinguished five types of flatulence: the sonorous and full-toned; the double; the soft-fizzing; the wet (“easily procured” by cramming oneself with “pies, custards, whip-syllabub, prunes, &c., &c.”); and the sullen, wind-bound Fart. On our side of the Atlantic, no less a paragon than Ben Franklin addressed the royal Academy in an open letter— a Swiftian satire of the academy’s pretensions and preoccupations—urging scientists to develop a drug to make farts smell better.

But then along came the Victorians and turned off the gas for about a century. In our grandparents’ era, there would seem at first glance, or first sniff, to be no fart humor at all in the mainstream humor of the early or mid-twentieth century—in sitcoms, family magazines, newspaper comic strips, Broadway musicals, or Hollywood movies. (Blazing Saddles, which did for flatulence what Deep Throat did for fellatio, didn’t come along till 1974.) Not even Mad magazine, in its early glory days, ever acknowledged the fact that Everybody Farts (the title of a matter-of fact 2009 picture book presumably intended to inoculate a kinder, saner generation against fart humor).

Nowhere in the Bible, as far as I know, is farting or its discussion forbidden. And yet its discussion in mainstream culture was unthinkable till recently. Fart was one of George Carlin’s celebrated list of Words You can’t Say on TV—not one of the original seven, admittedly, but one Carlin added when he expanded the list to ten. How on earth did a harmless joker like fart end up in the same cell with hardened felons like fuck and cunt and cocksucker? Whatever the grounds for the taboo, I’ve internalized it to the point that I have to override an inhibition every time I write the word— more of an inhibition than with shit, which has lost its charge from constant nonliteral use.

To find explicit public humor about flatulence in the mid-twentieth century, you had to go to the joke pages in men’s magazines, or the walls of public restrooms. Or the Ozarks: Pissing in the Snow: And Other bawdy Ozark Folk Tales includes a funny fart story that the compiler, Vance Randolph, heard in Missouri in 1954 from a Mrs. Ethel R. Strainchamps, who heard it herself in 1924. In this tale, which Randolph gives the title “Wind instead of Water,” two men and an old woman are starving to death when they find a little flour, but they have no water to wet it with, and of course you can’t eat dry flour. They persuade the old lady to urinate on it, but she accidentally breaks wind instead, blowing the flour away. The notes to Pissing in the Snow mention another tale in which “a violinist breaks wind mightily just as he reaches the climax of an impressionistic piece about a storm. An enraptured girl interprets the section as “lightning striking a privy.” Randolph’s volume, though, was well outside the mainstream— so far outside that it knocked about in manuscript for twenty-two years till someone finally dared to publish it in 1976.

I’m tempted to say that, for the first two thirds of the twentieth century, flatulence—not sex, not race— was the supreme taboo in American culture. Yet further research reveals that there were some feeble drafts of fart humor wafting through the popular culture of that era, though humorists were constrained to the sort of silent-but-deadly indirection that renders the fart jokes of that era wittier (not saying much) than those of our own unembarrassed era. In The Bank Dick, W. C. Fields hears the name Og Oggilby and murmurs that it “sounds like a bubble in a bathtub.” There’s another submerged fart joke near the end of Duck Soup, when the lemonade vendor played by Edgar Kennedy tries to take a bath in a tub where Harpo is hiding but keeps hearing toots from Harpo’s horn bubbling up from the bathwater.

Then there’s the most successful fart joke of the twentieth century. The whoopee cushion was invented around 1930 by the JEM rubber company of Toronto. it encountered some initial skepticism from potential manufacturers; Soren Sorensen “Sam Adams—the great laffmeister whose S. S. Adams company gave the world the joy buzzer, the dribble glass, the snake nut can, the squirting nickel, and all sorts of other classic laff-getters—turned down the idea, then regretted the decision for the rest of his life. He wound up selling an imitation, as did many other johnny-come-latelies. (Though whoopee cushion eventually prevailed as the generic term for all such noisemakers, for a while there it was one brand name among many: Poo-Poo cushion, Whoopee Pillow, Po-Pe Ball, razz- Z Ball, and Boop- Boop A Doop.)

Reading between the lines of old novelty catalogs, it is possible to find many precursors of the whoopee cushion. in 1924, the Heaney Magic company offered a Joke cigarette Holder: “When they try to smoke . . . a most peculiar noise will issue forth from the holder,” says the copy, the telltale grandiloquisms “most peculiar” and “issue forth” anticipating the whoopee cushion’s famous genteelism, “gives forth noises better imagined than described.”  The illustration shows the victim looking baffled as his cigarette goes “B- r- r- t- t- U- P”— surely the transcription of a raspberry if not a fart. The same catalog uses similar wording for its Horn cigar (“you will appear to magically control a peculiar horn or the stunt issues forth from some other source many will think”), though in the accompanying illustration, the noise produced by the jaunty young prankster in striped suit and boater is a simple “hoot.”

Before it became permissible to discuss farts openly, our forebears relied on all kinds of substitutes— from ducks to tubas, from foghorns to balloons. it may be that the fully lifelike simulation of farts became possible only with later improvements in sheet rubber, but in the pre-whoopee epoch it wasn’t necessary or even desirable for a noisemaker to sound exactly like the real thing; it just had to sound like something sometimes used to symbolize the real thing. Novelty makers are always boasting about how “realistic” their products are, but in this case, realism wasn’t wanted. Instead, aspiring practical jokers were offered a range of metonymies and metaphors. Even in our unembarrassed age, the whoopee cushion itself still claims to imitate a “Bronx cheer” or raspberry—not a fart but the imitation of one made by buzzing the lips in what linguists call a bilabial trill. (The reason that sound is called a “raspberry” is that it is or was cockney rhyming slang for “fart,” via “raspberry tart.”) The sound is the best simulation of a fart we can produce with our normal speech apparatus. In the early 1930s, when whoopee cushions took the world by storm, raspberries too were in fashion, at least on the funny pages—both Dagwood and Popeye had recourse to them now and then. A little later, Al Capp gave us Joe Btfsplk, the world’s biggest jinx, easily recognized by the small black cloud—a personal fart cloud? —hanging over him at all times. When asked how to pronounce Joe’s surname, Capp would respond with a raspberry, adding, “How else would you pronounce it?”

Christopher Miller is the author of Sudden Noises from Inanimate Objects, a Seattle Times Best Book of the Year. He teaches at Bennington College in Vermont.