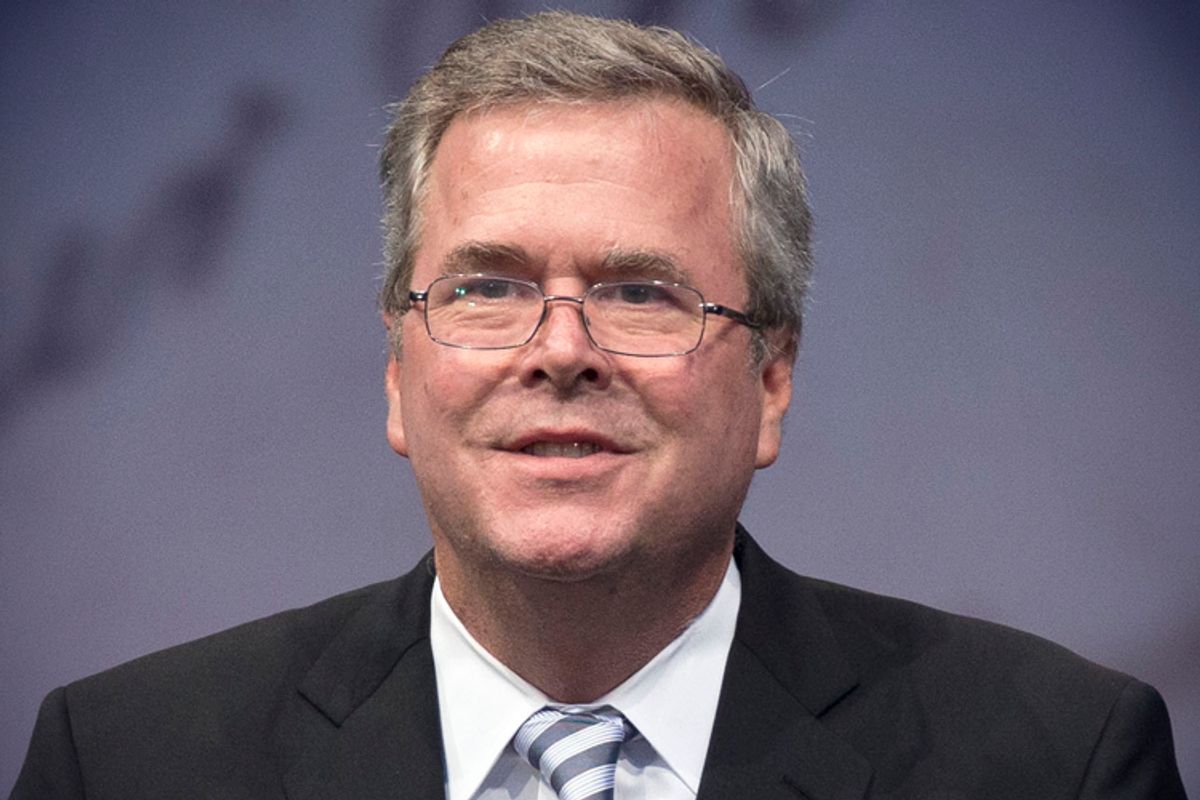 A dozen years after he ran his last political campaign, former Florida Gov. Jeb Bush is gearing up for a 2016 presidential bid – a campaign that would open up a new front in the Republican Party’s ongoing civil war.

Mike Allen reports in today’s Politico Playbook that according to Bush’s friends, he’s “leaning more yes than no” on launching a run. He’s campaigning for Republican candidates in Senate battlegrounds like North Carolina and Kansas, and Allen reports, “has headlined several fundraisers where the candidate COMES TO FLORIDA, where Jeb knows everyone.” The fundraisers, Allen writes, give us REASON TO THINK that Jeb will aim for a Bush restoration: “That means that the proceeds are all NEW MONEY for the guest, and the candidate gets to meet new supporters and build his or her own network.”

Bush’s constituency is largely the same one that helped Mitt Romney win the GOP nod in 2012 – rich conservative mega-donors seeking a candidate who will reliably promote corporate interests, without, say, making cringe-worthy assertions of a link between the HPV vaccine and mental challenges. As with Romney, Bush’s positions hardly differ from those of Michele Bachmann – he’s an opponent of LGBT equality, reproductive rights and Obamacare, and despite irking many conservatives by supporting immigration reform, he’s even backtracked on that issue to ingratiate himself to the GOP’s xenophobic base. There is, of course, the troubling matter of Bush’s support for education standards.

But while there are few discernible policy differences between the GOP’s “establishment” and Tea Party factions, that’s not to say a GOP civil war isn’t still underway. It’s a war that’s less about ideology than it is about image and priorities. Whereas Mike Huckabee will readily launch bigoted tirades against gay people, Bush will quietly oppose equal rights for LGBT citizens – and, if asked to comment on marriage equality, for instance, will say it’s all a distraction from the economy. The GOP’s backers on Wall Street may not share such retrograde views, but they’ve calculated that candidates like Bush stand a far better chance of winning the White House – and thereby advancing the corporate agenda – than the Huckabees and Cruzes of the party.

But are they right? For all the GOP elite’s eagerness to see another Bush presidency, there’s scant evidence that American voters are ready to see any such thing. In head-to-head match-ups against likely Democratic candidate Hillary Rodham Clinton, Bush performs worse than Tea Party favorites like Huckabee and Rand Paul (a candidate whose "independent" streak gives many donors discomfort), and barely outperforms Ted Cruz.

Evidence-based or no, however, the clamoring for a great establishment savior puts the lie to the conventional wisdom that the GOP is moving beyond the bitter divisions of 2010 and 2012. The establishment’s fear of a Tea Party nominee like Paul is palpable in its willingness to support a Bush candidacy and in the chatter that the latest Bridgegate news – Chris Christie is only an incompetent manager, not a scheming Don Corleone! – could mean that Christie is “poised” to return to the top of the GOP field. Whether – as in 2012 – the establishment gets its candidate remains to be seen. But there’s no doubt that the GOP civil war is hardly a thing of the past.