Marco Rubio's ISIS debacle: GOP senator all over the map on terrorism

Rubio backs Obama's ISIS plan, which he thinks is dishonest and ineffectual, but also identical to his own plan 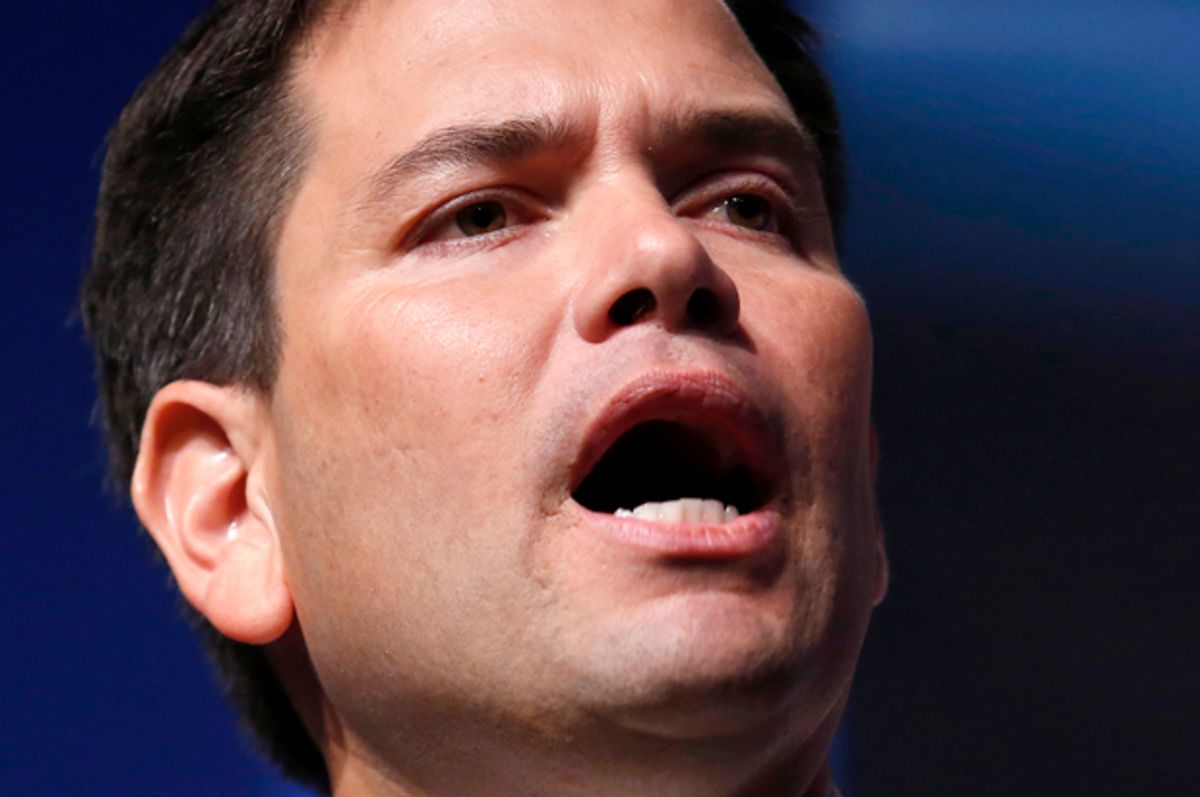 Last night President Obama made good on his promise to attack the Islamic State terrorists in Syria and ordered a series of airstrikes against targets in the northern part of the country and along its border with Iraq. It’s all part of the Obama administration’s legally dubious and strategically muddled plan to “destroy” ISIS, and quite a few members of Congress are voicing their support for the White House, even if they’re not actually willing to vote on the matter.

One of those vocally supportive legislators in Sen. Marco Rubio, who released a statement this morning backing Obama:

I support the President’s actions to target ISIL’s facilities in Syria. I have argued for months that President Obama has the authority to confront this threat to the United States wherever they seek refuge. Defeating this menace to all who value freedom and tolerance will not be easy, but is essential to our security. My thoughts and prayers are with our men and women in uniform carrying out their duties as part of ongoing operations in Iraq and Syria.

This statement is a bit of an eyebrow raiser, as Rubio has pulled off the remarkable feat of flip-flopping and then flipping back again on the White House’s ISIS strategy. In less than two weeks he’s taken a dizzying array of positions on ISIS and Syria and the White House’s plan for addressing both. It’s a complex and ever-changing situation, so I’ll break it down as best I can and try to track Marco Rubio’s position on ISIS and the Obama administration as it evolved in place.

Let’s go all the way back to September 11, the day after Obama gave his big speech announcing that the U.S. would target the Islamic State in Syria using air power. That morning, Rubio gave an interview to NPR and offered some praise for the strategy the president laid out:

I think we're in a much better place from where he was previously. If you recall, at one point, he called ISIL a JV team. Now he acknowledges that they're a serious threat, and that's good. And the other, you know - just a few weeks ago he said that any effort to really capacitate the rebels in Syria was a fantasy - that these were bankers and pharmacists - and now he wants to move forward in arming them, which I also think is important if done appropriately. So I think we're in a much better place, and by and large, I think the speech last night was effective in that regard.

Rubio tempered that praise with a bit of criticism and wished Obama was more forceful in his determination to “defeat ISIL no matter what,” but all told, it was a generally positive review.

RUBIO STATUS, 9/11: Supports the White House’s strategy, with some reservations.

The next day, Rubio changed his mind. In an Op-Ed for the Washington Post, he (laughably) criticized Obama’s overall foreign policy as “isolationist” and argued that the president’s “focus on a counterterrorism campaign akin to those waged in Yemen and Somalia, and his reliance on regional partners to deal with the challenge posed by the Islamic State, could lead to the continuation of what has been the most disengaged presidential foreign policy in modern American history.”

To confront the Islamic State terrorists, we need a sustained air campaign targeting their leadership, sources of income and supply routes, wherever they exist. We must increase our efforts to equip and capacitate non-jihadists in Syria to fight the terrorist group. And we must arm and support forces in Iraq confronting it, including responsible Iraqi partners and the Kurds. In addition, we must persuade nations in the region threatened by the Islamic State to participate in real efforts to defeat it.

A few days later, on September 16, Rubio went on Fox News’ “Hannity” and offered a bit more criticism of Obama and his ISIS strategy. Per Rubio, the president was not serious about building a coalition of Arab states to take on the terrorist group (just days earlier he’d faulted Obama for his “reliance on regional partners to deal with the challenge posed by the Islamic State”). He also said Obama was just taking the perfunctory actions he needed in order to punt the issue to the next president:

Let me tell you the implications. The implications are that all these other countries we’re trying to create a coalition with, especially the Arab countries, they listen to his speeches but they also listen to this confusion and what they conclude is we're not really committed to a true anti-Islamic terror campaign. He’s going to do what he needs to do in the short term to deal with this, but we’re not going to see it through under this president. And so that lack of reliability has really undermined this nation’s credibility and I really think undermines our ability to successfully put together a coalition of nations to confront this threat.

“This president is clearly looking forward to leaving it to his successor to figure all of that out,’ Rubio added, “because as he has said repeatedly, Americans are not going to do anything beyond these air strikes. I think that – he’s not being honest with the American people when he talks about it that way.”

Two days later, on September 18, the Senate had its chance to vote on a key portion of Obama’s plan to confront ISIS: the arming of Syrian rebels fighting the government of Bashar al-Assad. The Senate ultimately approved the measure, and one of the Senators voting aye was Marco Rubio.

After days of bashing the Obama plan, Rubio took to the Senate floor and downgraded his criticism of the White House strategy to “better late than never." He said that the White House's plan was what he called for previously, and argued that even though it might not succeed, they were obligated to give it chance:

The president’s come forward with a plan, a plan I wish he would have come forward with six months ago, that I called for three months ago. But I suppose, like in most things, better late than never. Even if late means that our chances of success have been minimized, even if it will cost more money, and even if it will now take longer. Better late than never. And that’s the question before us now.

RUBIO STATUS, 9/18: The Obama ISIS plan is the plan I called for months ago, and we have to give it a chance.

That brings us to today and Rubio’s statement on the air strikes, which he supports completely and views as key to “defeating this menace to all who value freedom and tolerance.”

Rubio is trying to come off as a hawkish enemy of terrorism while also criticizing the Democratic president who is going to war against the terrorists. He’s trying to criticize Obama’s plan while proposing his own exactly identical plan while also claiming that he called for the same strategy months ago. He's trying to have it every which way possible, and getting himself into a giant twist as a result.