How "Gotham" won me over: A lifelong Batman obsessive on Fox's new series

As a devout reader of Batman comics, I expected to hate this show--but I'm riveted 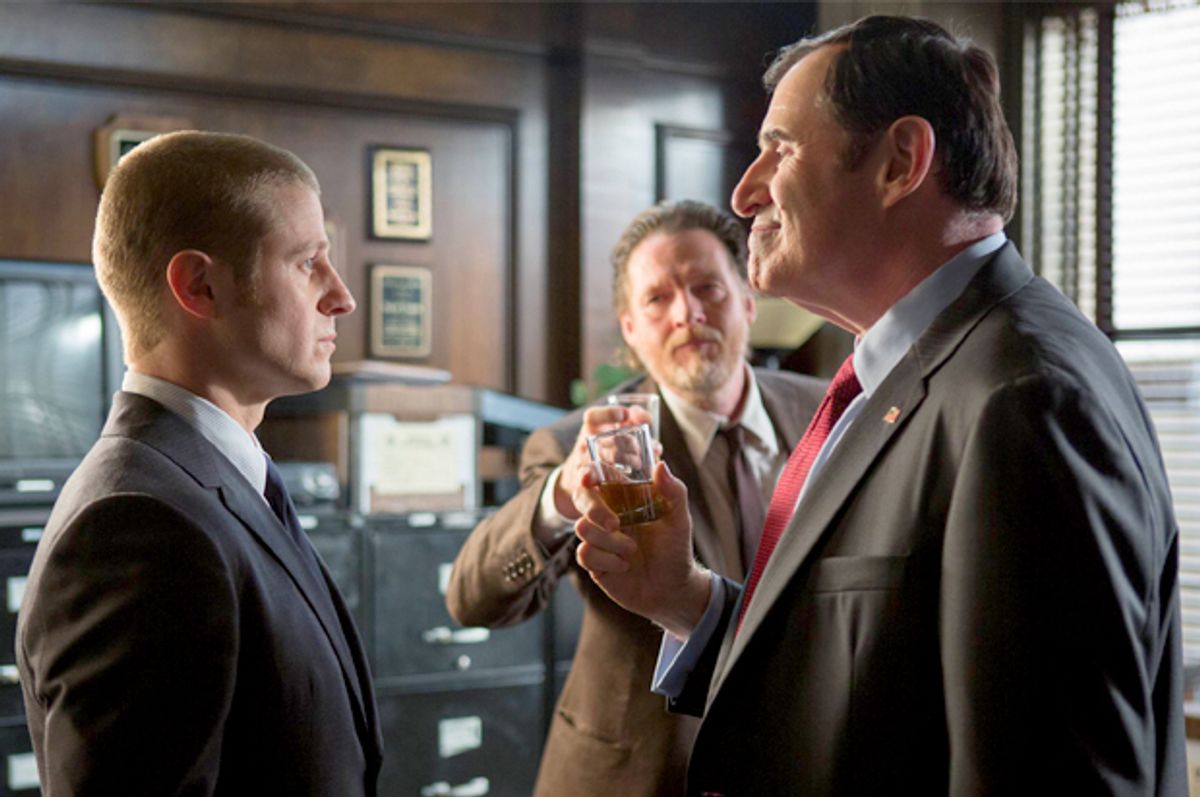 Though I’m a devout Batman-holic, I didn’t have high hopes for “Gotham.” A Batman prequel felt ridiculous and unnecessary. The presence of young Bruce Wayne, Penguin, Riddler, Catwoman (and others I don’t want to spoil) screamed “Muppet Babies: Gotham.” It seemed insane and misguided that the show wasn’t a straight-up adaption of “Gotham Central,” a classic DC series that explored what it’s like to be a cop in Batman’s world. But against all odds, “Gotham” is riveting. It's a fun, fast-moving series, thanks to some inspired casting and perfect cherry-picking of the Batman mythos by showrunner Bruno Heller.

If you’ve somehow missed Fox’s advertising barrage, “Gotham” focuses on Detective (and future Commissioner) Jim Gordon, a newbie to the Gotham police department who ends up investigating the murders of Martha and Thomas Wayne. Gordon not only has to solve the murder of the Waynes, but he’s stuck in the most corrupt city ever, with half or more of the police department in the pocket of crime boss Carmine Falcone (played by the immortal John Doman, who was Bill Rawls on “The Wire.”) To make matters murkier, Gordon’s partner Harvey Bullock (played by the always charming Donal Logue) is one of those corrupt cops. Also, Gordon’s fiancé Barbara is the former lesbian lover of one of the few good cops, Renee Montoya. It’s safe to say there are conflicts aplenty to play out this season and (with luck and viewers) future seasons. The pilot presents these conflicts while planting many Bat-seeds in quick, compelling fashion.

All those conflicts might feel like plot contrivances if not for the wonderful performance of Ben McKenzie as Gordon. McKenzie, who proved his cop cred on “Southland,” brings toughness, optimism and decency to Jim Gordon. You can feel Gordon’s drive to somehow do good in the hopeless, corrupt cesspool of Gotham. This version of Gordon is a war hero and son of a former district attorney, two facts which earn him enough respect to not be fired (or killed) for not being sufficiently corrupt. A satisfying early scene in which Gordon uses his brains, then his fighting skill, to take down a pill-craving perp shows the direct influence of Frank Miller’s portrayal of Gordon as a badass former Green Beret who’s more than capable of kicking butt. If you can’t have Batman on your side in a fight, Gordon might be the next best thing.

The pilot shows Gordon comforting a young Bruce Wayne and vowing to find his parents’ killers, a vow that will drive the series for, I presume, at least a season. The idea that a young Jim Gordon was there the night Bruce Wayne’s parents comes from “Batman Begins,” not the comics, though it’s a terrific enough idea that Grant Morrison incorporated it into his sprawling, 7-year Bat-saga. How fitting that a small act of kindness—being a decent person to young Bruce Wayne—eventually pays dividends in helping to shape the future of Gotham. In all aspects, McKenzie does a splendid job with the role Gary Oldham owned in the movies. It’s easy to imagine McKenzie’s youthful toughness growing into the weary grit of Gordon in “Batman Begins.”

The cast is impressive on the villain side. Jada Pinkett Smith is a standout as the awesomely named gangster Fish Mooney. The young Catwoman, Riddler, Penguin and Poison Ivy all feel like real people, while also feeling like their cartoony future selves, if that makes sense. I already mentioned that John Doman is playing Carmine Falcone, which should be reason enough to check out this series. Falcone is a fairly complex villain who tries to school young Gordon in why the cops and criminals should be working together: “You can’t have organized crime without law and order.” Batman is widely regarded as having the best rogues’ gallery of any hero, and they are well-represented.

So are the good guys. Young Bruce Wayne (David Mazouz) is already showing the grit that will bloom in bat-form. Taking a page from “Batman: Earth One” and the Christopher Nolan movies, this Alfred Pennyworth is far from a mincing servant. A former Marine, Sean Pertwee’s Alfred is the kind of guy who could probably beat a few lowlifes up all by himself. Detectives Renee Montoya and Crispus Allen of the Major Crimes Unit don’t have a lot to do, but they show a ton of potential, and they’re a nice reminder that not everyone in Gotham is on the take. I was a little disappointed that Harvey Bullock was completely corrupt (or at least 98.6 percent corrupt). He’s a far more complex character in the comics, but who knows what’s coming? Logue is an expert at playing complex characters, and it’s possible Jim Gordon may be the catalyst for some Harvey Bullock redemption.

It’s somewhat baffling that there’s rarely been a Jim Gordon comic series, but somehow he’s now the lead character in a major TV show. I guess sometimes the non-comics world has a better grasp of who’s really interesting than the comics world, like how comic book C-listers the Guardians of the Galaxy became Hollwood A-listers. In any case, it’s satisfying to see Jim Gordon get the spotlight he deserves. Gordon is, arguably, the most important Batman character other than old Bats himself. Gordon has been around since the first issue, and even the first Batman panel, ever. Way back in Detective Comics #27, Gordon is at home “entertaining his young socialite friend, Bruce Wayne.” Bruce asks, “Well, commissioner, anything exciting happening these days?” Gordon answers, “No—O—Except this fellow they call the ‘Bat-Man’ puzzles me.” That’s how it all began.

Over the years, Gordon has played a crucial role in many of the greatest Batman stories, including “Batman: Year One” and “The Dark Knight Rises,” two Frank Miller classics that show the beginning and end of Batman’s career. In fact, Gordon is often more heroic than Batman himself. More than once, Batman has been on the verge of killing the Joker, but it’s usually Jim Gordon who talks Batman out of becoming a murderer. Even when the Joker paralyzes Gordon’s daughter or murders his wife, Gordon won’t cross the line. He’s one of the most moral characters in comics. In “Gotham,” he feels like the same guy.

Prequels can be a mixed bag, to say the least. The “Star Wars” prequels basically took a Wookiee-sized dump on my childhood. On the other hand, “Hannibal” features a young Hannibal Lecter in his cannibalistic prime as part of a psychologically rich and darkly humorous drama. Thankfully, “Gotham” is far closer to “Hannibal” in terms of quality. It gives us a Jim Gordon who is a comic book hero in the best sense: an uncompromising, inspiring force for good. As two great Captain America movies have shown, a purely good hero doesn’t have to be a preachy bore.