After a dizzying day at the United Nations, a Salon reporter details successes, failures and mounting fears 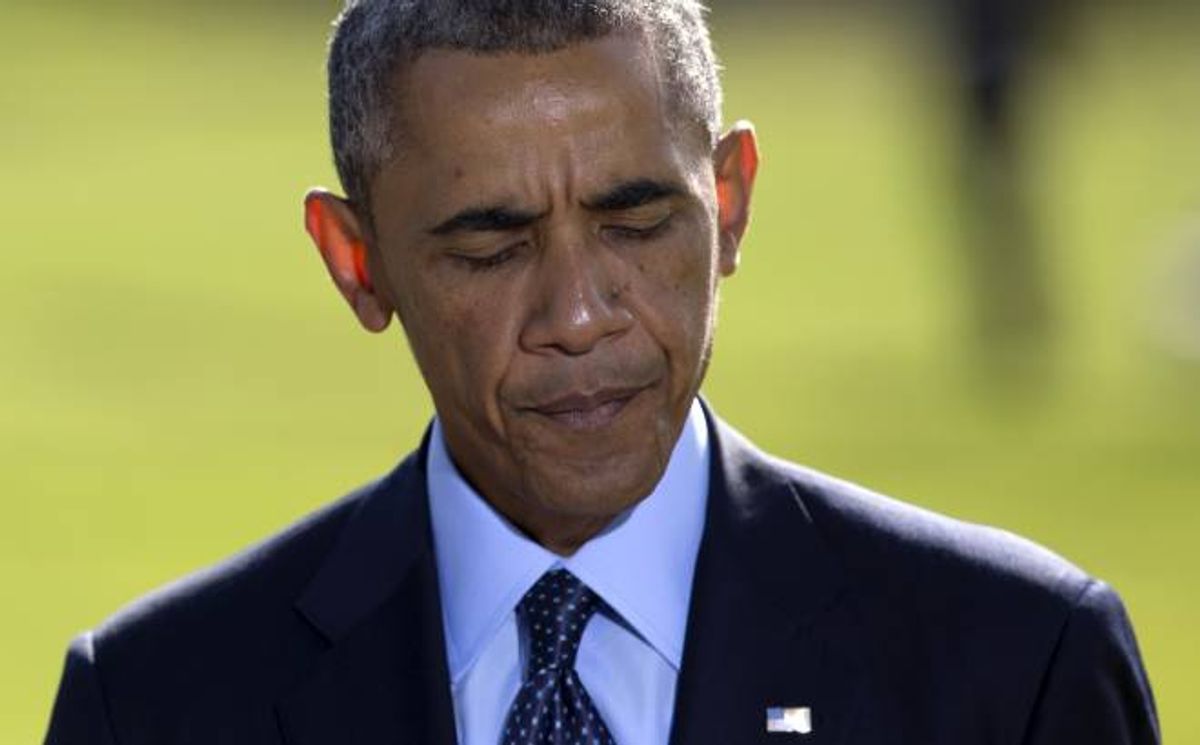 Here's what it's like trying to get into the headquarters of the United Nations when more than 120 heads of state and government leaders, including President Obama, are arriving as well: incredibly frustrating.

You wait in a line that stretches around the block to pass through airport-style security, watching anxiously on Twitter as the proceedings begin without you. Once delivered into the complex, you wander a bit, bouncing from closed, unmarked door to closed, unmarked door, until finally you find yourself delivered to the end of yet another security line. Frankly, you're not sure where exactly Secretary Ban Ki-moon, former Vice President Al Gore, NYC Mayor Bill de Blasio and "Messenger of Peace" Leonardo DiCaprio even are.

"You know what they say," a savvier reporter in a suit jokes to his friend. "The best way to cover the U.N. is to stay far away from the U.N." Whoops.

Early in the morning, when you're still charged with the energy that's been generating since Sunday's climate march, it's easy to see this as part of the buildup for what's been promised to be a "major turning point" for climate negotiations. It's even kind of funny:

But around the point when you realize that there's no way you're going to find a bathroom without having to pass through at least three more metal detectors, the bureaucratic mess of it all begins to grate on you. And now that you've finally made it to the party, you start to get the sinking suspicion that you're still, somehow, in the wrong place. No one ever promised that diplomatic proceedings would be riveting, but this was, after all, a day that was supposed to psych everyone up for the arduous year of negotiations that lies ahead. The generous way to characterize said psyching up, as each leader took his or her turn to address the the General Assembly Hall, is "subtle." Ben Adler, who was covering the event for Grist, noted as much as well: The speeches, he writes, were dry; the delegates who bothered to hang around, distracted.

The party did arrive, to a degree, with President Obama, whose speech, while light on actual commitments, did the best job yet of stirring up enthusiasm. His declaration that the U.S. and China "have a special responsibility to lead," because "that’s what big nations have to do," was greeted with a round of applause. On Twitter, updates from the climate community scrolled by too quickly to read. But as with the climate march, you had to be paying attention: The media, in general, still didn't appear to think that any of this was worth covering. And while Obama promised that the U.S. would continue to work to meet its goal of a 17 percent reduction in emissions by 2020, it was hard to ignore how hard Congress intends to make that for him.

If you were paying attention, this much did become clear: The world leaders who attended the summit are seriously concerned about climate change. Specifically, they're concerned about what it's going to mean for them. Island nations spoke passionately about the rising sea levels threatening to engulf them, others mentioned extreme storms, desertification, loss of GDP. President Obama spoke of wildfires in the West and floods in Miami.

Also clear: They're concerned about what taking on this battle will mean for them. While some smaller nations made bold pledges (Tuvalu's planning to run on 100 percent clean energy by 2020, others promised to be carbon neutral by 2050), little meant as much as the question of when "as soon as possible" -- which is when China promised to reach peak emissions and start cutting back -- turns out to be.

In the afternoon, a stream of announcements emerged about partnerships and commitments that certainly sounded good. In the moment, though, it's hard to know how, for example, a declaration by "U.N. Secretary General Ban Ki-moon, heads of state, leaders of major commodity and consumer goods companies, indigenous peoples’ organizations, and civil society groups" to cut the rate of forest loss in half by 2020, and stop it altogether by 2030, is actually going to play out. The World Resources Institute called the varied commitments to deforestation announced throughout the day "ambitious," saying, in a statement, that “when taken together and if backed by strong action, these commitments can dramatically improve the state of the world’s forests." But that's a lot of ifs.

Was the summit, in its own, understated way, achieving what it set out to do? Were we feeling inspired? I honestly had no idea. So I called up Jake Schmidt, an international policy expert at the National Resources Defense Council, to get his take. Schmidt, too, was at the U.N., but at this point I had given up on trying to find anyone in person; we spoke over the phone.

Compared to Sunday's historic New York City climate march -- "400,000 people on the street [with] all this energy," as Schmidt described it -- the relatively more austere proceedings at the U.N. might strike observers as alarmingly low-energy. But that alone isn't necessarily cause for concern, according to Schmidt. What we saw in the speeches, he said, were "at least some important signals that they're taking this issue seriously, and that they recognize that next year is a big moment for them, as leaders, to chart a much more solid course." So that's something.

It's also hard, Schmidt added, to get a good gauge on whether any of the other big announcements are actually as important as they sound: The deforestation partnership is a good sign, he said, because many of the companies who signed on to it are the ones that are actively causing the problem; so too is the recognition, in the Compact of Mayors, that cities are central to efforts to mitigate climate change. The oil and gas partnership, on the other hand? Underwhelming, Schmidt said: "When you look at the challenges of climate change, I hope we're doing a heck of a lot more than just documenting the problem."

Forget the details, said David Waskow, director of the WRI's International Climate Initiative (also at the U.N., also reached via phone). To him, the energy and momentum was palpable, and was the most important takeaway from the day. A lot of that came from the multiple references throughout the day to Sunday's march, where it was a lot easier to feel and see that energy being expressed. "We can talk about all the discrete elements" of the various announcements and commitments made," Waskow said, "but I think in a lot of ways, the whole is more than the sum of the parts."

But what comes next?

We've heard this before, of course. But Schmidt gave me reason to believe that this wasn't another Copenhagen, when despite the build-up of enthusiasm, the world failed to agree to a legally binding treaty. Today was the first chance countries had to indicate how they're feeling as they begin the work of trying again; in March, they'll be expected to declare their intended contributions to a treaty. By the time we get to Paris, at the end of 2015, everyone will have a pretty good idea of what we're working with. After Paris, we'll be pretty confident in our knowledge of what everyone's realistically going to do, and whether it's going to add up to significant action. After Tuesday's summit, said Schmidt, "there's not a single leader that can claim to not be prepared next year. They were brought here to the U.N., asked to focus on this topic, and they know their marching orders for next year: to be bold and ambitious."

Oh. The time for boldness and ambition is next year. Looked at that way, the day wasn't so much a turning point as a beginning. It was a testing ground to see what countries were willing to commit, and to see how much further they'd need to push one another to get where they need to be by Paris. Hopefully, it will give countries a head start in reducing their carbon emissions, and in realizing that doing so not only doesn't destroy their economies, but comes with benefits like job creation and public health improvements, will motivate them to commit to doing even more.

Ban Ki-moon, who had called the day's summit, seemed to think it had done the trick. "This was a great day!" he announced at the day's end. It was also a tiring day -- more so, somehow, than Sunday, where over two miles of marching and dancing and chanting left you exhausted, but also energized in a way that U.N. summits just aren't designed to be. Building momentum for high-level action is a different beast entirely from building a grass-roots movement to urge that action along, but to get us where we need to go, we're going to need both. Meanwhile, the answers to the big questions -- whether the world will respond in time, whether we'll avert the worst consequences of climate change -- remain somewhere off in the future. As we inch along that path, there's sure to be more frustration, more steps that aren't quite big enough, more turning points declared that feel slightly less-than. We've just got to trust that everyone's committed for the long haul.