Hilary Mantel is not a terrorist: Debunking the ludicrous right-wing backlash to her short story

Conservatives are calling for legal action against the novelist, who wrote about a plan to kill Margaret Thatcher 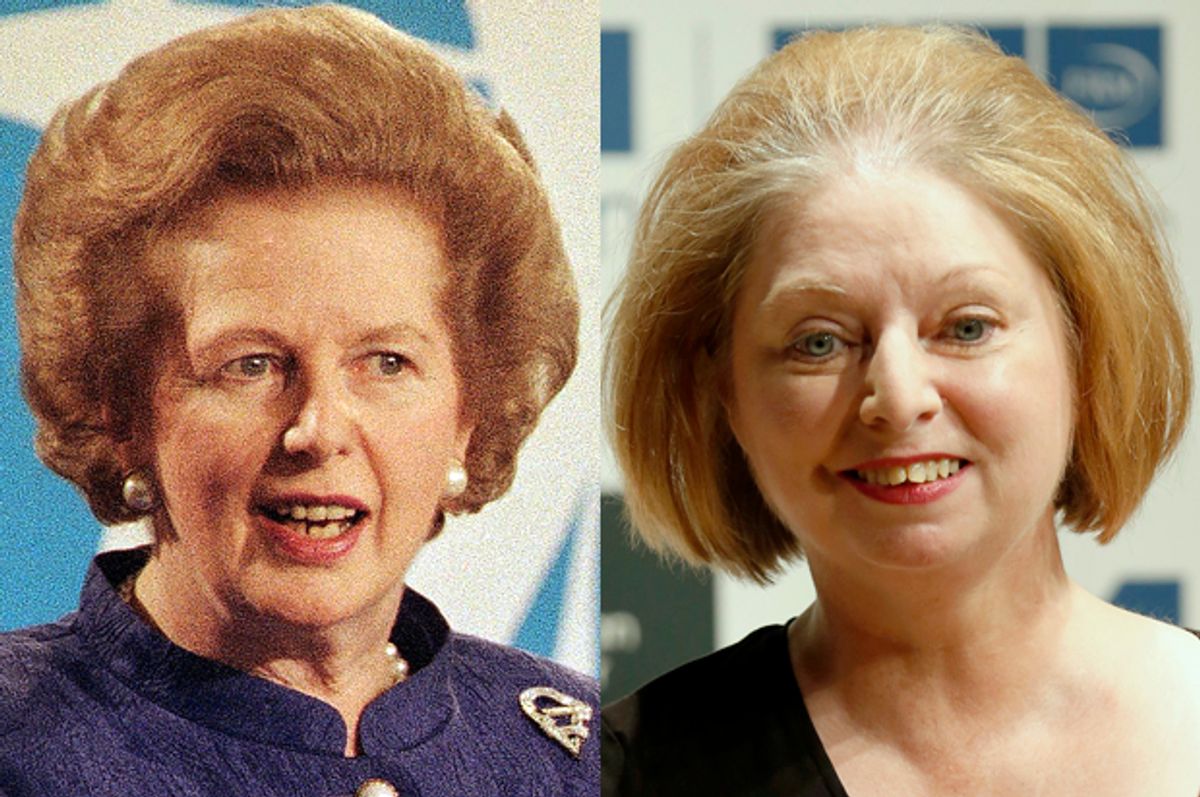 Lest Americans think we have cornered the market on boneheaded, reductive and entirely symbolic political arguments, the British are currently discussing whether Hilary Mantel -- the two-time Booker Prize-winning author of "Wolf Hall" -- ought to be investigated for fantasizing about killing a dead woman.

At issue is a short story titled "The Assassination of Margaret Thatcher -- August 6, 1983," describing the events leading up to the moment a sniper picked off Thatcher as she walked out of a private hospital. The shooting never happened, of course, but Mantel really did see the prime minister from her own bedroom window on that day and reports thinking, "if I wasn’t me, if I was someone else, she’d be dead." Like many Britons, Mantel vividly recalls how she felt about Thatcher and her policy of completely deregulated capitalism. "I can still feel that boiling detestation," she told the Guardian. "She did long-standing damage in many areas of national life."

British conservatives have responded -- in the Times and the Daily Mail, for the most part -- by accusing Mantel of "bad taste," of insulting the victims of the Irish Republican Army, of having a "disordered psyche" and of encouraging people to think, "if you don’t like your democratically elected leaders, who operate within the rule of law, you can always think about assassinating them." A person named Lord Timothy Bell went so far as to announce, "If somebody admits they want to assassinate somebody, surely the police should investigate."

Journalists on the left contributed to the fuss as well, describing Mantel (in the Guardian) as "waiting for the soft-knock of Scotland Yard" as her wrists itch "in anticipation of handcuffs." There's not the slightest reason to think that authorities will take any action at all against Mantel, especially given that the only person who could conceivably be seen as "threatened" by the story died last year. Unless Mantel has access to a time machine and plans to revisit that afternoon in 1983 toting a Heckler & Koch PSG1, Thatcher is safe (or, to be precise, in a place where safety is irrelevant).

In actuality, the kerfuffle over "The Assassination of Margaret Thatcher -- August 6, 1983" has mostly served as a pretext for each side to portray the other as either hate-filled insurrectionaries or thought police. Mantel's defenders have pointed out that plenty of other authors have written fiction depicting the assassination of historical figures, from Frederick Forsyth's "The Day of the Jackal," about an attempt on the life of French President Charles de Gaulle, to about a zillion tales fantasizing a preemptive killing of Hitler (who was also, one might add, democratically elected). Still others note that Lord Bell, who prior to being knighted by Thatcher did P.R. for the bloody Chilean tyrant Gen. Augusto Pinochet, is not well-situated to talk trash about a mere novelist.

Mantel is not just a novelist, however, but a great political novelist at the top of her game, and the story in question is a far cry from the exercise in homicidal wish-fulfillment that most observers seem to think. (To be fair, Mantel's own statements have rather fostered this view.) "The Assassination of Margaret Thatcher -- August 6, 1983" is, if anything, a story about how a woman like Mantel would never resort to political violence no matter how much she might long to.

It begins with an extended portrait of a "genteel" middle-class neighborhood in the town of Windsor, temporarily invaded by the press when Thatcher visits a hospital there for minor eye surgery. "Windsor's not what you think," the narrator protests. "It has an intelligentsia," a few "local socialists" and "republicans" who fume over the fact that their votes have been negated by the "royalist lickspittles" who predominate. The narrator runs a few errands then rushes home to be on hand when a temperamental plumber arrives to fix her boiler. It's a while before she realizes that the man she's let into her house has other plans, and at first she assumes he's a member of the paparazzi.

Eventually, the narrator realizes the man's real intention, but Mantel slightly elides the moment when this awareness dawns. The device he assembles is revealed not to be a camera with telephoto lens, but does she have an inkling any sooner? At what point does she understand that he will kill her if she attempts to thwart him? And does she really want to thwart him? By refusing to nail down any of these questions, Mantel makes the narrator complicit, although to an extent that she can't allow herself to acknowledge.

The narrator of "The Assassination of Margaret Thatcher -- August 6, 1983" hates Thatcher. ''There are some strong opinions flying about," a neighbor remarks at the beginning of the story. ''Mine is a dagger,'' the narrator replies, ''and it's flying straight to her heart.'' The neighbor tells her, "admiringly," that this sentiment ''is the strongest I've heard.'' Once her visitor's plan becomes clear, the narrator tells him all the things she loathes about Thatcher: her "fake femininity," her humorlessness, her bogus populism: "it's her philistinism, her ignorance, and the way she revels in her ignorance. It's her lack of pity. Why does she need an eye operation? Is it because she can't cry?''

But her visitor will have none of this. "'I'm not shooting her because she doesn't like the opera. Or because you don't care for –- what in sod's name do you call it? –- her accessories. It's not about her handbag. It's not about her hairdo. It's about Ireland. Only Ireland, right?'' He talks about Bobby Sands and the other IRA hunger-strikers, dead nearly two years, and he doesn't even want to hear about her sympathies in that department. "Everybody's got an Irish granny. It's no guarantee of anything at all ... I don't care about the songs your bloody great-uncles used to sing on a Saturday night."

The narrator tells him, once, that "violence solves nothing," but she doesn't really believe that herself. "It was only a piety, like a grace before meat. ... It's only what the strong preach to the weak: you never hear it the other way round; the strong don't lay down their arms." She, after all, would like to get rid of Thatcher, too, but she is also very comfortable in her pretty neighborhood, with its occasional "fragile Georgian fanlight, or a warm scoop of terracotta tiling, or a glint of colored glass." Her rage is impotent because all she's willing to sacrifice to it is a good mood. The sniper explains to her that he doesn't expect to survive the assassination, and she shows him a hidden door into the next house, a possible escape route. Ways out are her specialty.

Throughout all of these conversations the narrator is wondering if he will kill her or let her live. Perhaps she's gone through her whole life complying with whoever has the upper hand. But if that's wrong, can murdering a woman in cold blood be right?

These are the same paradoxes Mantel examines in her Thomas Cromwell novels, "Wolf Hall" and "Bring Up the Bodies." Possibly the very dumbest thing said in the controversy over "The Assassination of Margaret Thatcher -- August 6, 1983" was uttered by Nadine Dorries, Conservative MP for Mid Bedfordshire, who pronounced herself "gutted because Hilary Mantel is one of my favorite authors." But what did Dorries expect from the author of "Bring Up the Bodies," which is, among other things, a merciless examination of politics as the art of expedience? Did she think of these books as stirring costume dramas set in the colorful Tudor era?

If so, she's deluding herself. Mantel's hero is a guy who allows an innocent musician to be put to death because it served the king's purposes and because the man insulted him. And not least because Mark Smeaton's execution was necessary to Cromwell's long-term plans for England. Cromwell has traditionally been viewed as a conniving, jumped-up, ruthless fixer; Mantel's portrayal of him is a sympathetic exception, one that contrasts his common-born talents with the ridiculous farce of inherited power. He's not the sort of man who would hesitate to eliminate a woman like Margaret Thatcher if she got in his way, any more than she spared a shred of pity for the workers whose lives she destroyed. These are the sort of people who get things done, says Mantel's fiction. Like it or not.

The full text of Hilary Mantell's "The Assassination of Margaret Thatcher -- August 6, 1983"

The Daily Mail on conservative criticisms of "The Assassination of Margaret Thatcher -- August 6, 1983"