"How to Get Away With Murder" isn't even about Viola Davis

After the backlash to Alessandra Stanley's piece, the show is actually more about the students than its protagonist 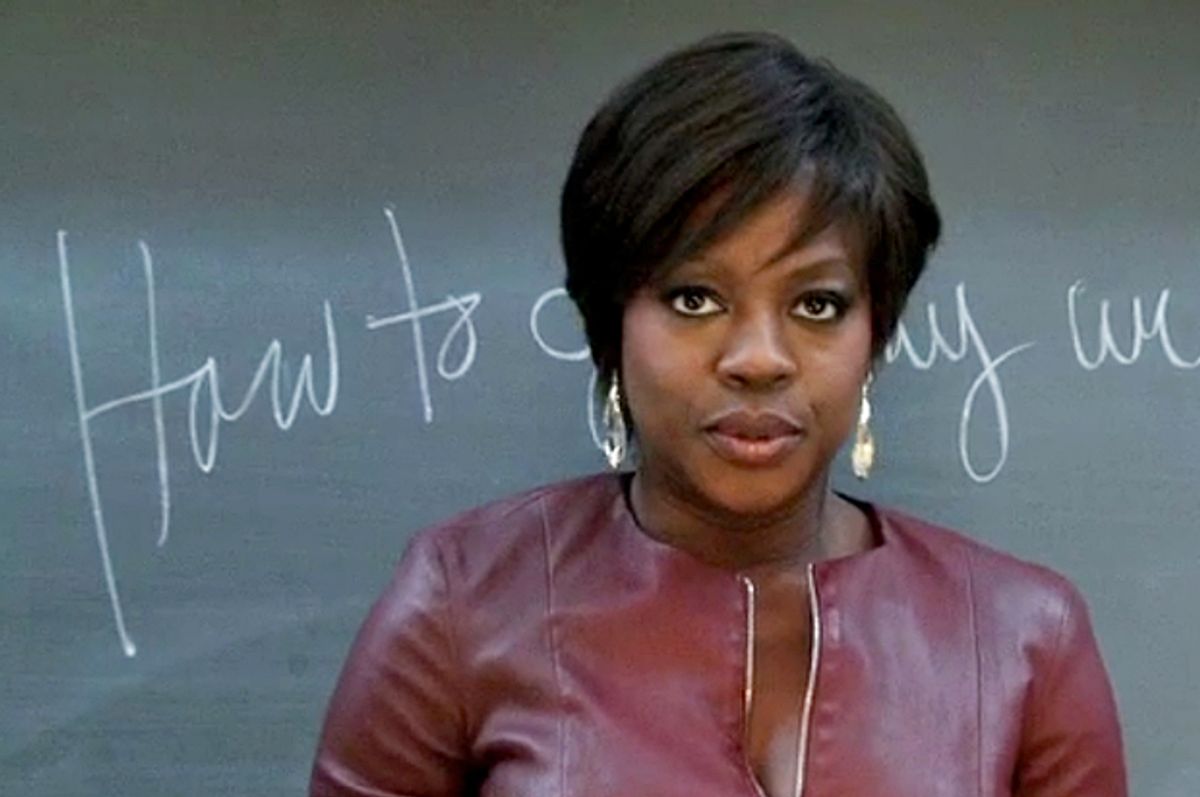 The outcry over Alessandra Stanley's piece, last week, on Shonda Rhimes and "How to Get Away With Murder" -- in which she described both Rhimes and characters on shows Rhimes is creatively involved with as "angry black women" -- missed one major point, not least because many of Stanley's critics cannot possibly have seen "Murder" yet (it debuts Thursday).

What becomes clear from the pilot episode is that Davis' performance, though impressive, is not the center of "How to Get Away With Murder." Like "Grey's Anatomy" and "Scandal," two shows Rhimes created, "Murder" (which she "only" produces) is so far an ensemble show looking at a group of ambitious strivers. Davis is the sun around which the action of the pilot orbits -- but her anger, or lack thereof, is rather beyond the point.

The show "Murder" most closely resembles, in fact, is the late and semi-lamented "Damages," in which a high-stakes and frankly unrealistic prize is set up for young would-be attorneys who must impress an unflappable boss. On "Damages," the relationship was between two people -- Glenn Close's attorney and Rose Byrne's trainee, shifting in power from episode to episode. "How to Get Away With Murder" revises the formula, making Davis a professor who taps several of her students for an opportunity to work more closely with her and, presumably, get deeply morally compromised.

It's not that Davis is unimportant to the show; she provides it with both its narrative engine and a fierce, idiosyncratic performance, biting off her lines in a way that edges upon camp but never crosses the line. But she's the star in a literal sense, as those doing real narrative work, her students, orbit around her. We know that Davis' Annalise Keating is a supremely good defense attorney and that she's widely respected; as for other aspects of her personality, they seem likely to be parsed out in brief, incandescent scenes in which her lawyerly facade slips a bit.

But her students, by contrast, are open books. While Keating will surely take at least a full season to reveal herself, the dynamic among the class of students working with Keating is easily decoded and more immediately rewarding: They're a diverse group and play with types in manners far more interesting than simple racial anger -- there's the obnoxious preppy striver, and the nonwhite student who is trying to do twice as well despite the deck having been stacked against him. It's these characters who seem, after viewing the only episode of "Murder" ABC made available, to provide the real promise of intrigue going forward.

Asking what Davis' character has to say about race is -- so far -- way beyond the point of a show on which Davis is not yet playing a character. She's a type: The sort of ultra-competent professional with an implied dark side who provides the raw material for potential fireworks by midseason. Those tuning in to "How to Get Away With Murder" anticipating anger will be disappointed; Davis is, so far, the picture of sangfroid as her students collapse from stress around her. It's an auspicious beginning for a character who could go anywhere.

How To Get Away With Murder Shonda Rhimes Viola Davis