The Emma Watson threat was an offensive hoax

Here's a tip for awareness-raising: Don't be a perv 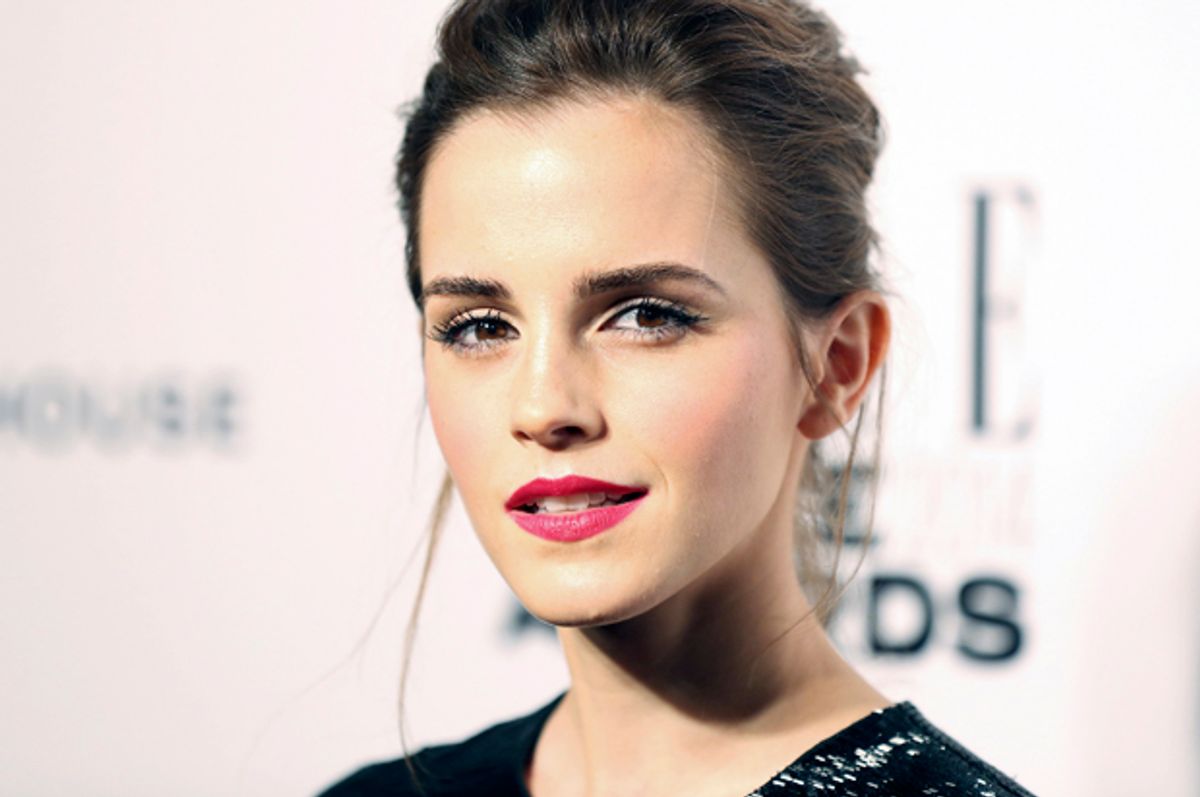 Earlier this week, the Internet was buzzing with the open threats that nude photographs of actress and Goodwill Ambassador Emma Watson, who recently made a powerful speech about gender equality to the United Nations, would be leaked. An Emma You Are Next site featured a tearful-looking photo of the actress, the 4chan logo and a countdown clock to a promised Wednesday release. Though there was plenty of cause for skepticism, the warning still sounded plausible, given the plethora of photos of nude female celebrities that fell from the clouds earlier this month. And in a flash, the headlines about Watson's sane, passionate feminist plea were replaced by ones about "Harry Potter babe's stolen sex pics." Could this be the start of another "fappening"?

But on Tuesday, the site revealed itself to be a hoax, replaced by a redirect to a site called Rantic Marketing, which claimed to be "a social media marketing enterprise that has participated in some of the most viral campaigns and music videos" and was now demanding 4chan be shut down. The page now features an open letter to Barack Obama saying, "The recent 4chan celebrity nude leaks in the past 2 months have been an invasion of privacy and is also clear indication that the Internet NEEDS to be censored." Naturally, the story then went out on a few news sites that the threat had been the work of a group with an anti 4chan agenda,  calling it a "marketing stunt" from a "social media firm." But a closer reading led other reporters to smell something fishy. Your first hint: We know Barack Obama doesn't control the Internet. As Business Insider  observes, Rantic appears to be the hoax within the hoax of this beautiful nesting doll of BS that also includes a fake news site and rap videos about pickles.

It's all great that we are not being deluged with nude photos of Watson now, but it doesn't change that there are a lot of disappointed onanists out there today, or that there's really no such thing as a fake threat against a real person. Unless Emma Watson was in on this as a very elaborate statement about the intimidation of women on the Internet – which I seriously doubt – this was instead a very juvenile bid for attention that used Emma Watson's body as its foundation. Which is considerably less hilarious when you know what it's like out there for women, who are routinely harassed, threatened and intimidated for making exactly the kinds of statements that Watson made to the U.N. When Watson said, "I want men to take up this mantle," she was talking to everybody – that includes you, snickering jokesters. You can't hide behind disruption and think it makes using the violation of women as your punch line acceptable.

It's an idiotic defense that was also deployed this week by Sam Pepper, the YouTube star who sparked outrage with a video of himself groping women and laughing about it. Pepper's video was removed by YouTube, and he followed up with another in which a woman gropes men. He now claims his entire stunt was a scripted and "staged experiment" to highlight the sexual abuse of men. "We should be offended by such acts," he says now, pleased with himself yet again. "I just wanted to show, in many cases people would be outraged by an act like this on a woman but then laugh it off when it's a man." You know what? Just don't.

It's not entertaining or intriguing or even edgy and challenging for dudes to threaten and harass women, and it's not entertaining or challenging for them to claim they were just pretending to do it either. By the way, no, it's not clever to pretend to harass men either. The toxic on- and offline environment that women have to live in on a daily basis is real. It's not a joke. It's not a stunt. And it's insulting and frankly blatantly disingenuous and self-serving to treat it like it is.