"Jimi: All Is by My Side": This is the weirdest rock biopic of all time 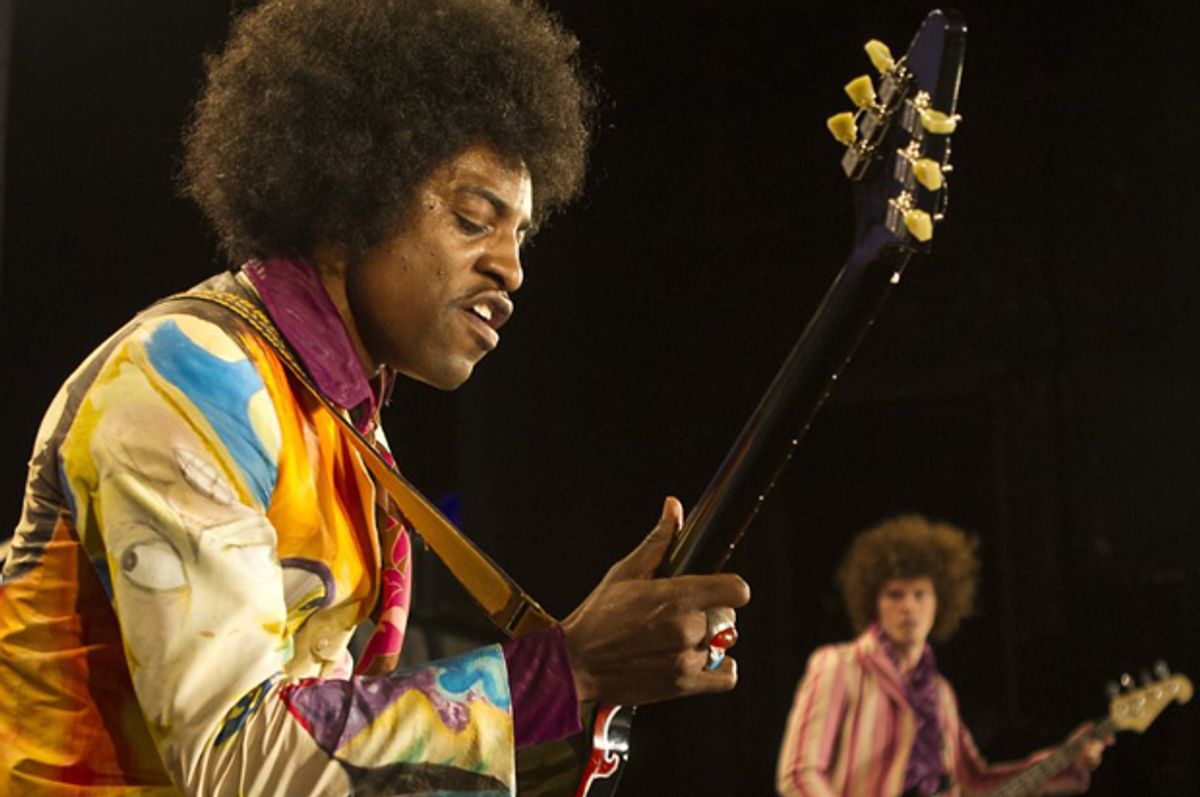 So John Ridley, the Oscar-winning screenwriter of “12 Years a Slave,” has made a movie about Jimi Hendrix that has no Jimi Hendrix music in it. As in, exactly none of Hendrix’s best-known songs are played in “Jimi: All Is by My Side” or heard on the soundtrack. No “Purple Haze,” no “Fire,” no “All Along the Watchtower.” (Yes, I know he didn’t write that one.) Oh, there are some snatches of distorted guitar noise here and there, along with snippets from blues songs that Hendrix is known to have played but never recorded. But the only song we hear André Benjamin (aka André 3000, the frontman and fashion plate of OutKast) perform all the way through, in his uncanny impersonation of Hendrix, is a cover version of – well, I shouldn’t spoil the bizarre surprise. Let’s just say it’s a well-known pop song by somebody else, which Hendrix did indeed play live at a famous London gig.

This is largely the result of the tangled condition of the Hendrix musical estate, which is apparently tied up in legal knots that even a veteran showbiz insider like Ridley could not sever. But the damn thing is, Ridley very nearly makes this insuperable obstacle work to his benefit. He delivers a flawed, ambitious and deeply peculiar portrait of one of the 20th century’s most enigmatic musical talents, in the year before he ascended to rock-god status, that resembles no other pop-music biopic you’ve ever seen. Although it’s rooted in Benjamin’s memorable portrayal of Hendrix as a shy, dreamy young man with utopian yearnings (and what might today be diagnosed as some kind of personality disorder), “Jimi: All Is by My Side” is also a work of sound-and-vision collage that suggests the experimental films of its late-‘60s period. Dialogue from one scene often flows into another (or is inaudible); newsreel footage and archival photos separate episodes; much of Tim Fleming’s cinematography comes in smoky, boozy interiors. (The film was entirely shot in Dublin, which more closely resembles ‘60s London than London does.)

Anybody who goes to this movie longing to hear the hits will come away immensely frustrated, and so will anybody who wants a conventional biopic. But taken on its own terms, “Jimi: All Is by My Side” is a fascinating work that struggles to rescue the real Jimi Hendrix from the myths and legends. It tells the true but little-known story of Linda Keith (Imogen Poots), a 20-year-old London socialite who was then dating Keith Richards, and how she spotted Hendrix one night in 1966, when he was playing as a sideman with an obscure New York R&B group. She noticed both his immense facility with the guitar and his uneasy feline grace, and decided she would mold him into a rock star. She delivered Hendrix into the hands of Chas Chandler (Andrew Buckley), bass player for the Animals. His band was breaking up, and Chandler was looking for promising young acts to manage. It’s no exaggeration to say that Chandler’s instinct to get Hendrix out of the intensely segregated American music scene and over to England, where people would go nuts for his uncategorizable blend of blues, R&B and psychedelic rock, changed the course of pop-culture history.

Maybe it’s nettlesome to contemporary sensibilities, on many levels, to be told that the ferocious guitarist and songwriter who transformed a generation’s consciousness – and who was almost the only African-American in the lily-white rock scene of the late ‘60s – was to some extent created or shaped by two white English people. If there’s a secret thread connecting “Jimi: All Is by My Side” to “12 Years a Slave,” and to Ridley’s other work (from “The Wanda Sykes Show” to “Barbershop” to his crime novels), it’s a steadfast refusal to surrender to cant or ideological orthodoxy. Ridley is undeniably an eccentric and ornery character; I almost want to slip into Jimi-speak and call him a “strange cat.” He crossed the picket lines and kept working during the writers’ strike of 2007, less than a year after publishing an incendiary essay in Esquire whose title (and premise) I am better off not discussing here.

If I find Ridley’s contrarian-conservative politics disturbing on a personal level, the way they shape this film is not simplistic. (It isn't actually Ridley's directing debut; he made a little-seen thriller with David Caruso and Kelly Lynch in 1997.) As a writer of both drama and fiction, Ridley makes interesting choices and takes abundant risks, which is really what you want. In the portrait he and Benjamin create, Jimi Hendrix is both a person profoundly affected by racism and one who longs to escape the prison of racial ideology. We see Jimi humiliated by London cops for the crime of walking down the street with Kathy Etchingham (the wonderful Hayley Atwell), his white girlfriend; they address him as “Ooga-Booga man” and force him to surrender his beloved military-surplus jacket. “What war did you fight in?” one asks scornfully. Hendrix replies he’s been waging war against the color gray, but it keeps winning. But later, when Hendrix gets a lecture from activist Michael X (Adrian Lester) about serving as a role model to “his people,” meaning England’s black community, he simply isn’t interested. “My people?” Jimi muses. “They’re all my people.”

But Michael X has a point when he says that Britons view Hendrix as an exotic, “an electric wog,” and it’s a point Ridley is too intelligent not to grasp. During Hendrix’s year of struggle in London, when he’s torn between Kathy and Linda, between stardom and obscurity, we can see the seeds of both his enormous success and his self-destruction being planted. An immensely talented and appealing figure, Jimi is also a moody, abusive hothead who once beat Kathy nearly unconscious with a pay-phone handset. As much as the white rock world revered his guitar prowess and his visionary or mystical leanings, it also viewed him as a primal or atavistic force of nature, rather than a hardworking musician who poured years of his life into practice and apprenticeship before getting his big break. Hendrix came to London as a huge fan of Eric Clapton (Danny McColgan) – but at least as Ridley tells the tale, when the two finally jam onstage with Cream, Clapton simply walks off after realizing that he’s been blown away by an American unknown.

Ultimately, “Jimi: All Is by My Side” is so strange and so cursed by circumstance – an art film about a famous musician, without any of his famous performances in it – that it’s destined to go down in history as a footnote to the more normal Hendrix film somebody else will make someday. It’s difficult to imagine what its audience is: You and me, I guess, if you can get over all the stumbling blocks to enjoying yourself. It may be an important artistic stepping stone for the irascible and difficult Ridley, who seems determined to follow no one else’s path but his own, and also for André Benjamin, who has arguably been playing an updated version of Jimi Hendrix all along and here gives us the rock god at human scale, damaged and vulnerable and as lost as the rest of us.